REVIEW – We check out both Ninja Turtles Zoom exclusive Steelbooks

Teenage Mutant Ninja Turtles:
The Teenage Mutant Ninja Turtles are bigger and better than ever in this blockbuster hit loaded with non-stop action and laughs! When New York City is in trouble, it’s up to these four ninja-fi ghting, pizza-loving brothers to save it. Aided by determined reporter April O’Neil (Megan Fox) and their wise master Splinter, these unlikely heroes must face their ultimate nemesis – the evil Shredder.

Many (me included) still have a huge fondness for the 1990 live action Teenage Mutant Ninja Turtles movie, which overcame a limited budget bring the comic book-turned-cartoon characters to live with (at the time) state of the art animatronics, and went on to be a huge box office hit.

Some inferior sequels followed, and a CGI animated movie attempted a reboot of sorts in 2007.

Then it was announced that Michael Bay’s Platinum Dunes would be bringing new live action movie to big screens in 2014. The world trembled, and fans prepared for the worse.

The end result, while no masterpiece, is an enjoyable action flick which sees the turtles brought to life not via animatronics, but the latest performance capture technology. The effect isn’t always convincing here, but the CGI does benefit from having real actors underneath, interacting with other cast members on set.

The story line is pretty thin, but does offer an interesting alternate origin for the turtles, tying them into the past of news reporter April O’Neil.

Fortunately, a couple of very smart casting choices really help keep things moving – the brilliant Will Arnett as April’s cameraman Vernon Fenwick adds some good comic relief, which veteran character actor William Fichtner, as the scientist who might know more about the turtles’ origins then he’s letting on, once again proves himself a worthy member of the 33% club – that rare group of actors whose mere presence in a film improves it by 33%.

Director Jonathan Liebesman keeps things moving along at a brisk pace, and he’s to be commended for his staging of the many action scenes – it’s a refreshing change to have longer, sweeping shots that let see where all the action is taking place, rather than fit-inducing quick cutting that many recent films suffer from.

The movie is no classic, but it’s definitely an enjoyable action movie that should please fans young and old, setting things up nicely for a sequel…

Teenage Mutant Ninja Turtles: Out of The Shadows:
Sequel to the big-budget reboot of the comic book series following the anthropomorphic ninjutsu-trained turtles Leonardo (Pete Ploszek), Michelangelo (Noel Fisher), Donatello (Jeremy Howard) and Raphael (Alan Ritchson). The turtle’s arch nemesis Shredder (Brian Tee) has returned and employed Techno Cosmic Research Institute scientist Dr. Stockman (Tyler Perry) to create some mutants of his own in the form of ferocious duo Bebop (Gary Anthony Williams) and Rocksteady (Stephen Farrelly). Meanwhile, the evil Kraang (voice of Fred Armisen) has arrived from Dimension X to lead an invasion of New York City. With the help of journalist April O’Neil (Megan Fox) and vigilante Casey Jones (Stephen Amell), the turtles face a fight on two fronts to save the city from certain destruction.

After establishing the core characters of the turtles, Splinter, Shredder, and April O’Neil, the sequel takes the opportunity to introduce more fan favourites, in the form of Kraang, Baxter Stockman, Bebop & Rocksteady, and, of course, Casey Jones, while Will Arnett also makes a very welcome return.

The introduction of Kraang and Bebop & Rocksteady means even more of the characters are CG rather than flesh and blood, but they manage to tread the fine line between cartoonish and realistic, and do verge on irritating at times, but the addition of Casey Jones and Baxter Stockman balances things out nicely.

Stephen Amell’s performance as Casey Jones is very good as a disillusioned cop turned vigilante, while he has an easy chemistry with the turtles.

Speaking of the turtles, the CGI effects are far more refined this time around. In the first film they’re let down by the facial animations, but in the sequel it’s easy clear the advances that have been made in just the two years between films. This time round the animation is much more refined, with mouth movements especially looking much more realistic.

Director David Green takes over from Jonathan Liebesman, but does a great job of keeping a consistent look and filming style, once again framing the action to ensure we get a good look at what’s going on.

The film ticks all the sequel boxes, including development of existing characters, introduction of new ones, a broader scope and bigger set pieces.

Neither of the movies are classics, but they are definitely better and much more fun than I was expecting. Watching both back-to-back makes for a great double bill, though it seems that two films might be all we get – the second one was not a hit, so plans for a third are currently on hold.

Video
Note: The second film includes a 3D disc in the release, but the review is based on the 2D presentation.

With such a recent pair of big budget films you’d expect top notch video quality, and you certainly won’t be disappointed with either of the them here.

Both movies’ colour palettes are reproduced extremely well, with a vibrant image that really pops of the screen.
The cinematography in both films covers all the extremes of light and shadow, often in the same shots, and the transters do them justice, with detail visible at both ends of the spectrum.

Fine image detail is excellent across the board, with no apparent edge enhancement, just a clean, pristine picture on both discs.

It’s hard to find fault with either of them.

As with the video, the soundtracks on both releases are superb.

Both movies get Dolby Atmos audio, which sound fantastic even on a 5.1 setup. As you’d expect from these kind of films, the sound stage remains active throughout, with plenty of atmospheric and directional effects and thundering bass.

There aren’t many quiet moments, but when they arrive both soundtracks also display impressive subtlety, while throughout it all, dialog remains clear.

Both releases come with a small selection of extra features, which don’t go into a massive amount of detail, but do give a good look at the impressive performance capture and CGI used to bring the turtles to life on screen.
For the first movie we get a collection running just under an hour.

“Digital Reality” takes a look at the technology used to bring the turtles to the big screen. The approach is interesting – while stuntmen did the more action-packed work, for the most part the characters were performed, on set, by the actual actors playing the roles, with the their body and facial performances digitally captured, allowing genuine interaction with the human characters, rather than having them reacting to thin air.

“In Your Face! The Turtles in 3D” is a brief look at the work that went into the 3D conversion of the film. While it’s not going to change your opinion on the worthiness of 3D, it does show how much thought goes into process.

“It Ain’t Easy Being Green” gives a quick run through of the filming, covering locations and some pretty impressive studio sets.

“Evolutionary Mash-up” gets all educational, with a brief history of the evolution of real-world turtles over the last 220 milion years or so, as well as a look at the history of the ninja.

An extended ending is next. At less than a minute, there’s nothing to blow your mind.

Finally, there’s a music video for “Shell Shocked”, accompanied by a making of featurette.

Extras for the sequel run about 45 minutes, and include:

“We Are Family” looks at the development of the turtles’ relationships with each other. It’s clear the actors playing the characters get along in real life, and that chemistry really does shine through the CGI.

“Whoa! Expanding the Turtleverse“ naturally covers the introduction and casting of fan favourite characters into the movie, including Casey Jones, Bebop & Rocksteady, Baxter Stockman, and Kraang. Each character and their respective actor is covered, and it’s clear that the film makers wanted to justice to them all.

“House Party” looks at the new-look turtles’ lair. For all the CGI used the films, it’s again impressive the huge amount of thought and detail that’s put into the real sets.

Next up is an ILM showreel, which offers a load of before and after shots of the effects work that the carried out. It’s truly mind-boggling, and covers many elements you will have missed first time round.

The next extra covers all the Easter eggs that the film managed to squeeze in, including shots based on comic book frames, set decoration and dialog.

The first movie gets nice colourful group shots on the front and the back, both of which look great, with a very nice finish. This one also benefits from a sturdy cardboard slipcase featuring the same art.

The second movie artwork is more steelbook-specific, showing the turtles bursting through the front of the case, with Bebop and Rocksteady doing the same on the back.

The live action Ninja Turtles reboot had an up-hill struggle to win over those still fond of the 1990 film, and for the most part it succeeds. The effects and action set pieces are impressive, while the human cast make it through without being over-shadowed.

The sequel is basically more of the same, which in this case is no bad thing, while the addition of some fan-favourite characters keep things fresh.

Both movies get a decent selection of extras, and great looking steelbook releases.
Definitely recommended and worth picking up 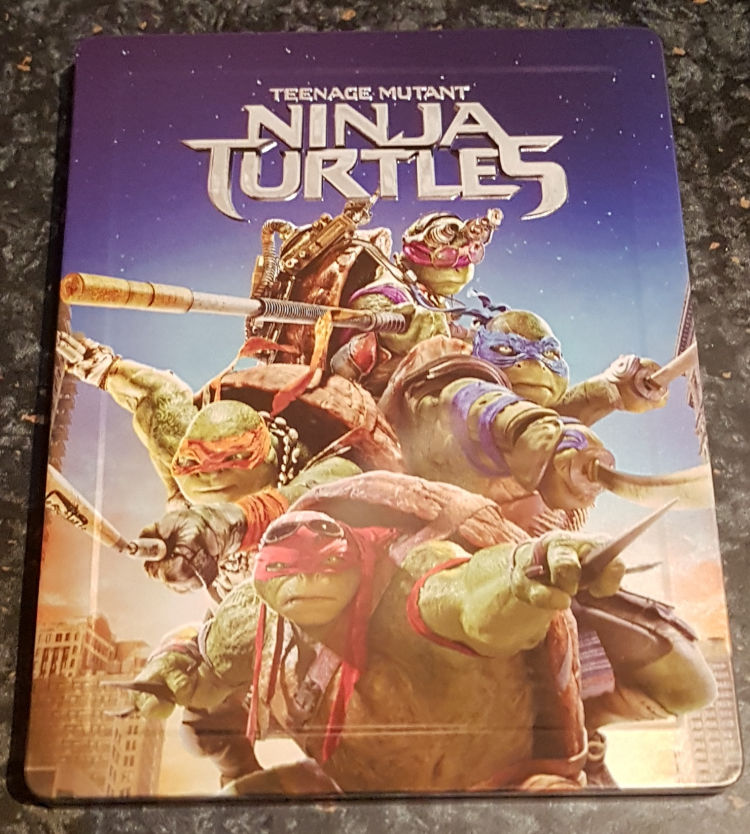 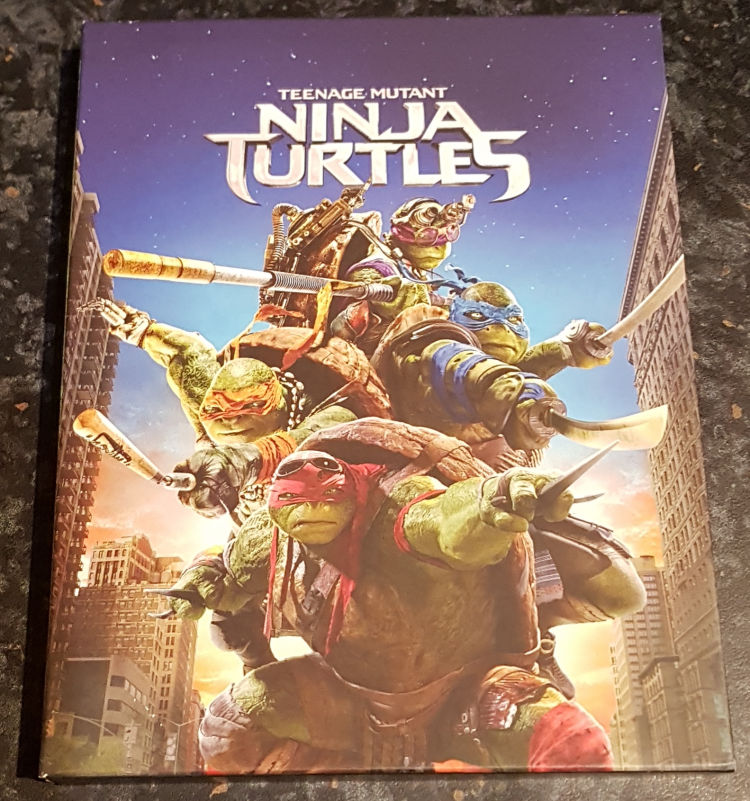 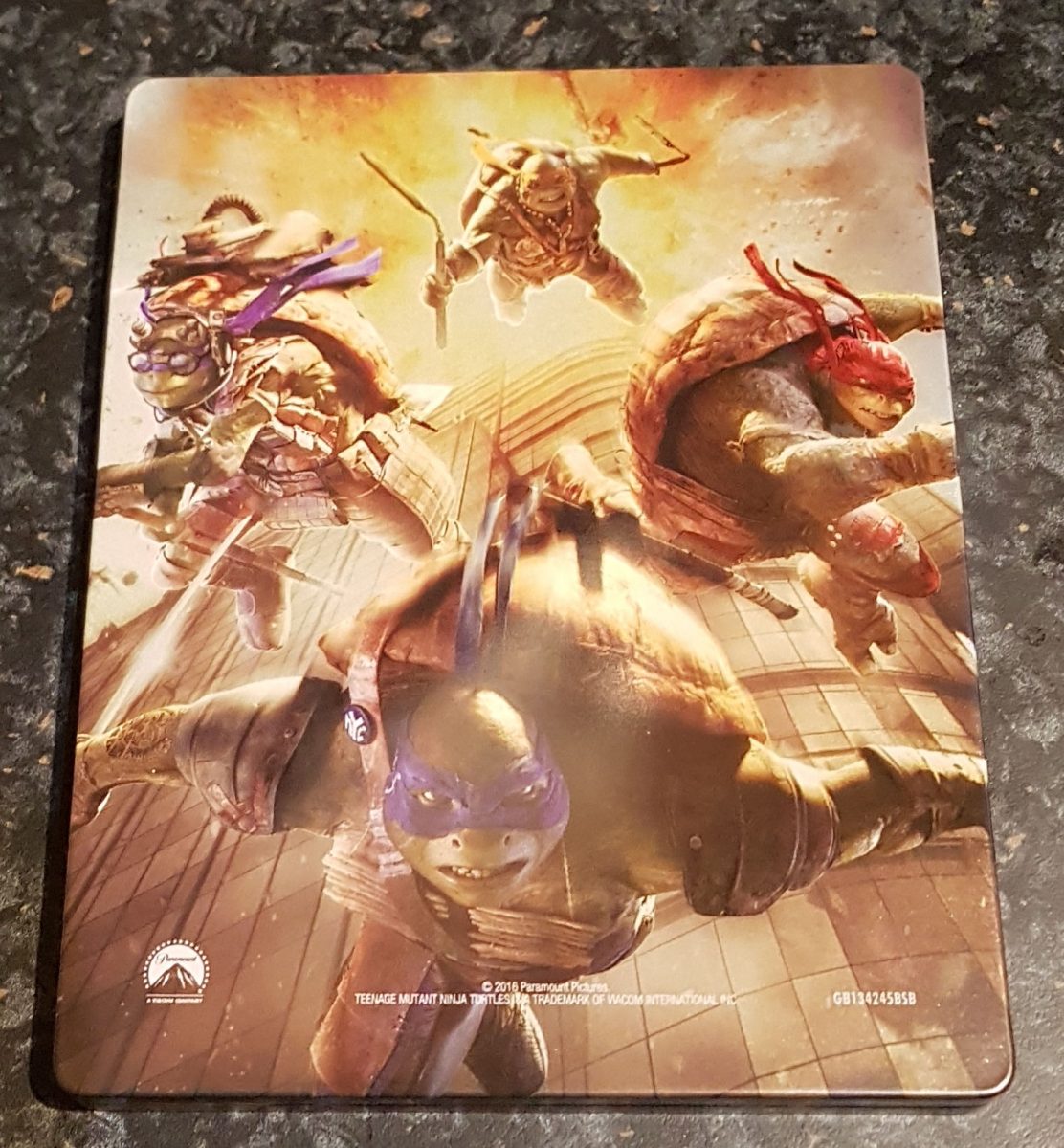 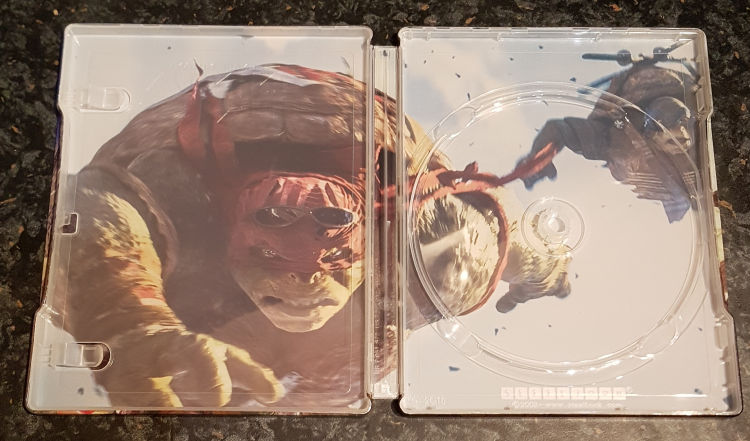 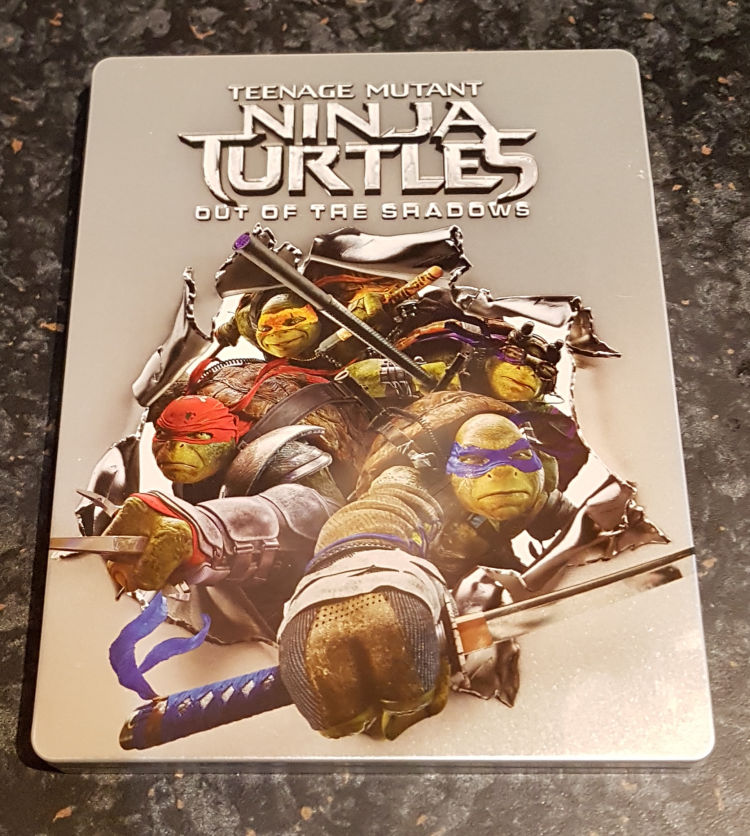 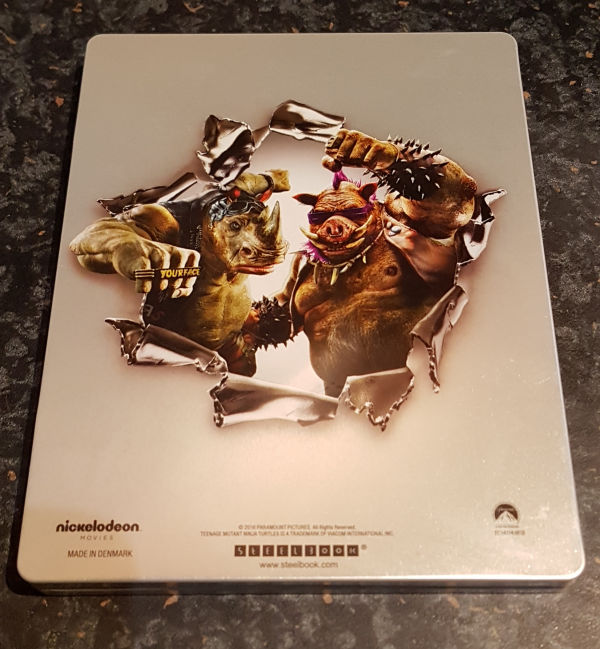 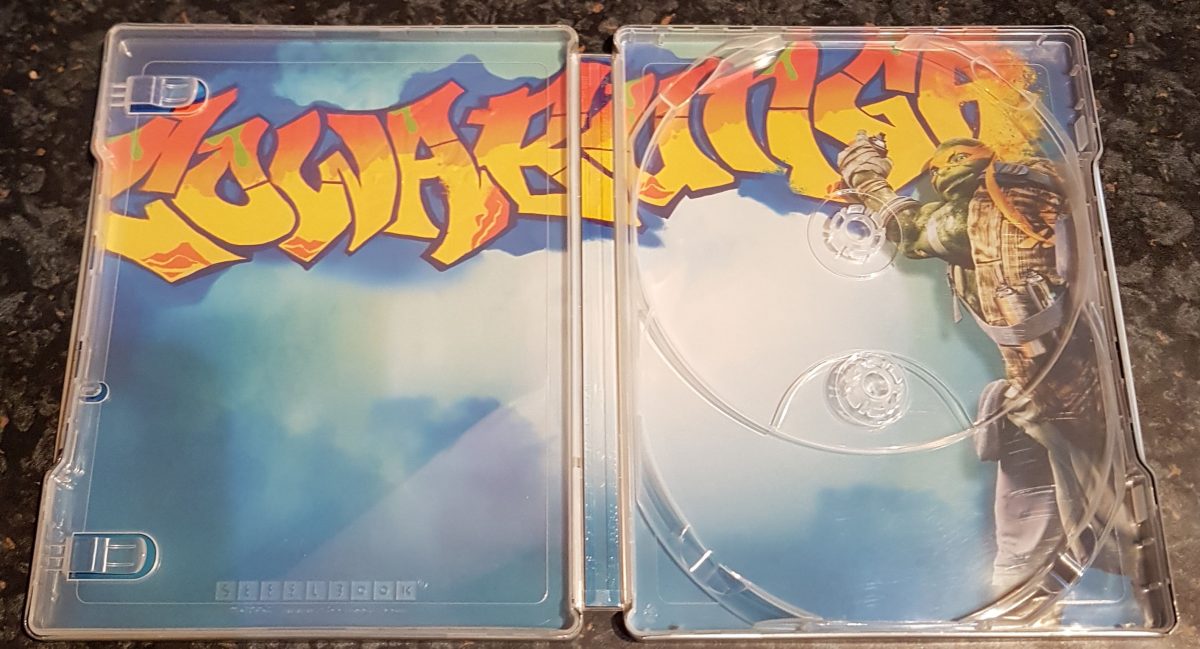