Much later than originally planned (don’t ask…) we’ve finally taken a look at the stunning new 4K release of V For Vendetta, the latest release from Titans of Cult.

Film
Britain has become a police state, monitoring every citizen’s move, a virus outbreak is sweeping across the country, and a new Civil War is on the verge of tearing the USA apart. But enough about 2020, amiright?!?

Adapted from the graphic novel written by Alan Moore and drawn by David Lloyd, V For Vendetta introduces us to Evey (Natalie Portman), a young woman living in a near-future totalitarian Britain, as she is saved from a rape at the hands of the secret police by the mysterious V (Hugo Weaving) , a masked vigilante hell bent on fighting back against state oppression. Evey ends up being dragged reluctantly along for the ride, but as she learns more about V’s history, she gradually becomes a willing participant in his plans.

Written by The Matrix creators the Wachowskis, and directed by their former Assistant Director James McTeigue, V For Vendetta may lack some of the nuance of Moore’s story, but is still a vast improvement over previous shoddy adaptations of the writer’s work like From Hell and The League of Extraordinary Gentlemen (although Watchmen, which followed in 2009, is arguably better).

While there are some nicely staged action scenes, the film makers should be congratulated for not Matrix-ifying the movie, instead keeping it pretty low key and dialog heavy.

They’re helped enormously by a very well chosen cast. Portman and Weaving (who replaced Hugh Darcy a few weeks into filming, and over-dubbed some of his footage as well as shooting his own) are both great. To say the pair have sizzling chemistry would be a stretch, especially as V is behind a mask all the way through, and Portman’s English accent is a bit hit and miss, but they commit to the material and make a believable pair.
The supporting cast includes a who’s who of British talent, including John Hurt (star of the film adaptation of perhaps the most famous piece of dystopian fiction, 1984), Stephen Rea, Stephen Fry, Tim Pigott-Smith, Roger Alllam, Eddie Marsan and more.

V For Vendetta stands up very well 15 years after its release, with many of the film’s themes being incredibly prescient. Thankfully it manages to stick to being a film about ideas, with something to say (though not always very subtly), rather than just turning into a brainless action flick.

Video
Taken from a new 4K scan of the original negative, V for Vendetta’s 4K release is an absolute treat.

The fine detail on show in things like cloth and skin pores is very impressive, and there’s a great sense of depth to the image throughout. This is helped by a well-balanced use of HDR, offering a ton of shadow detail, and crisp, bright highlights. The film often uses a muted colour palette, which is accurately presented, though the boldness and ‘pop’ is there when needed.

There’s a nice, light bit of grain, which helps add to the overall visual mood of the film, and the whole presentation has a nice organic and gritty feel.

Audio
As impressive as the video is, that’s nothing compared the soundtrack. We get a tremendous new Dolby Atmos mix, which brilliantly captures both the quietest subtleties and detail, as well as the deepest thunderous explosions.

Dialog is clear throughout, and pinned to the front channels, while the surround and height speakers get a real workout. Directional effects are precise, while the score and atmospherics fill the whole room. Bass is powerful, but never overpowering.

Apologise to your neighbours in advance, and get the volume turned up.

Extras
We get a nice selection of extra features included in this release.

On the 4K disc is a newly recorded 13 minute conversation between director James McTeigue and producer/co-writer Lana Wachowski as they discuss the film, it’s themes and its legacy.

On the Blu-ray disc – which is the same as the one previously released, and not newly remastered – are another batch of extras, starting with a ‘Director’s Notebook’ in-Movie Experience, essentially a picture-in-picture video commentary with McTeigue, alongside a selection of cast and crew, discuss the making of the film.

Next are selection of featurettes, running about an hour in total, that look at the making of the film, the story of Guy Fawkes, and new wave of comics in the 80s, with their darker and often more realistic themes.

All of the above is worth a watch, and together covers just about everything you need to know about the making of the film.

Finally, we get Saturday Night Light live sketch with Natalie Portman, a music promo video, and a trailer.

Packaging
As with all Titans of Cult releases, what fans really want to know about is the packaging and presentation, and you’re not going to be let down with this one. In fact this may well be their best looking release to date.

The outer package, as usual, is clear plastic with printed artwork giving us a teasing glimpse at the contents inside.

Open it up we get two steelbooks – a full-sized one housing the movie disc, and smaller one containing the usual collectors pin badge. This is a great choice, and one we applauded previously with the ToC Mad Max Fury Road release. While the artwork on both is really nice, the movie Steelbook also comes in a beautifully crafted die cut cardboard sleeve, and the effect is stunning. Top marks on this one.

Things are let down slightly with the pin badge. Modelled after one of V’s dominoes, it looks great as always, but rather than the usual enamel, this one’s plastic, which is a shame. The build quality seems fine, it just lacks the solid, weighty feel of the previous ones.

Minor quibbles aside, this is a stunning looking package.

Summary
V for Vendetta is a brilliant film, and its themes feel more relevant than ever at the moment.

The 4K presentation is a definite upgrade over the old Blu-ray – both the video and audio are top notch.

Once again Titans of Cult present the whole package beautifully. The two steelbooks look superb, and the cardboard sleeve is brilliant, classy touch. It’s a shame that the badge is only plastic this time round, but that’s a small complaint, and shouldn’t put you off. 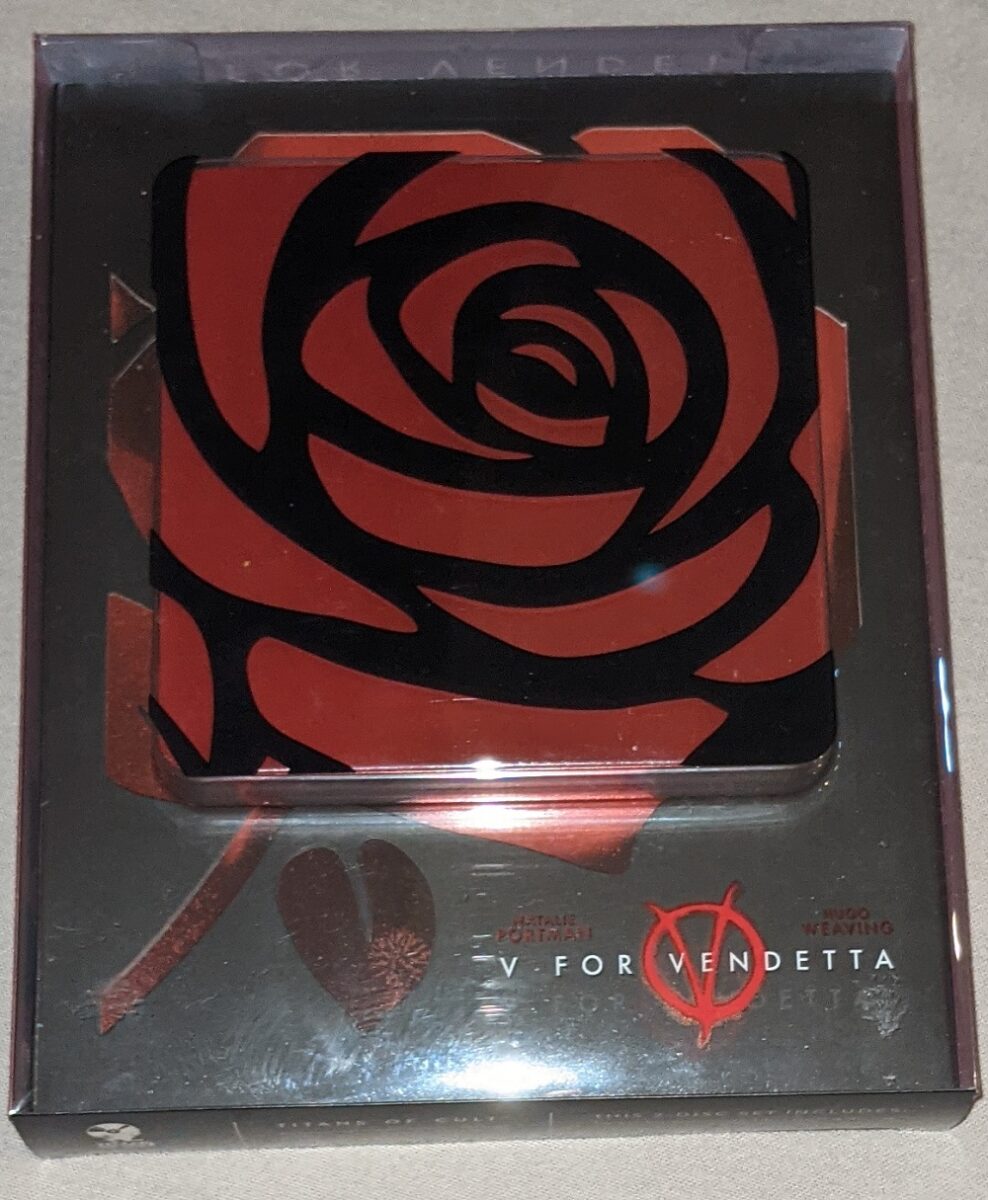 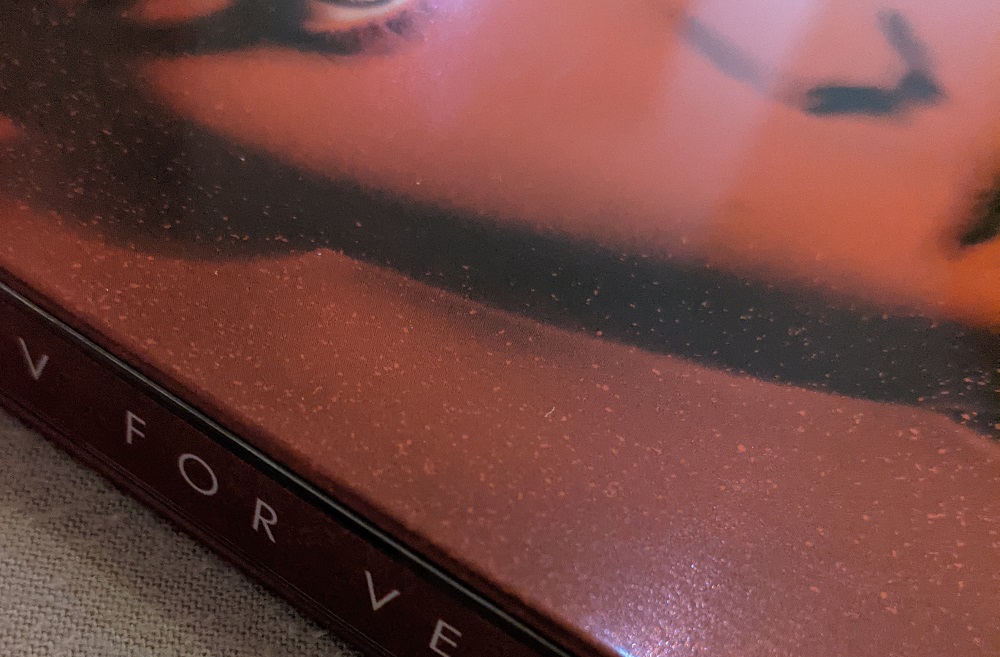 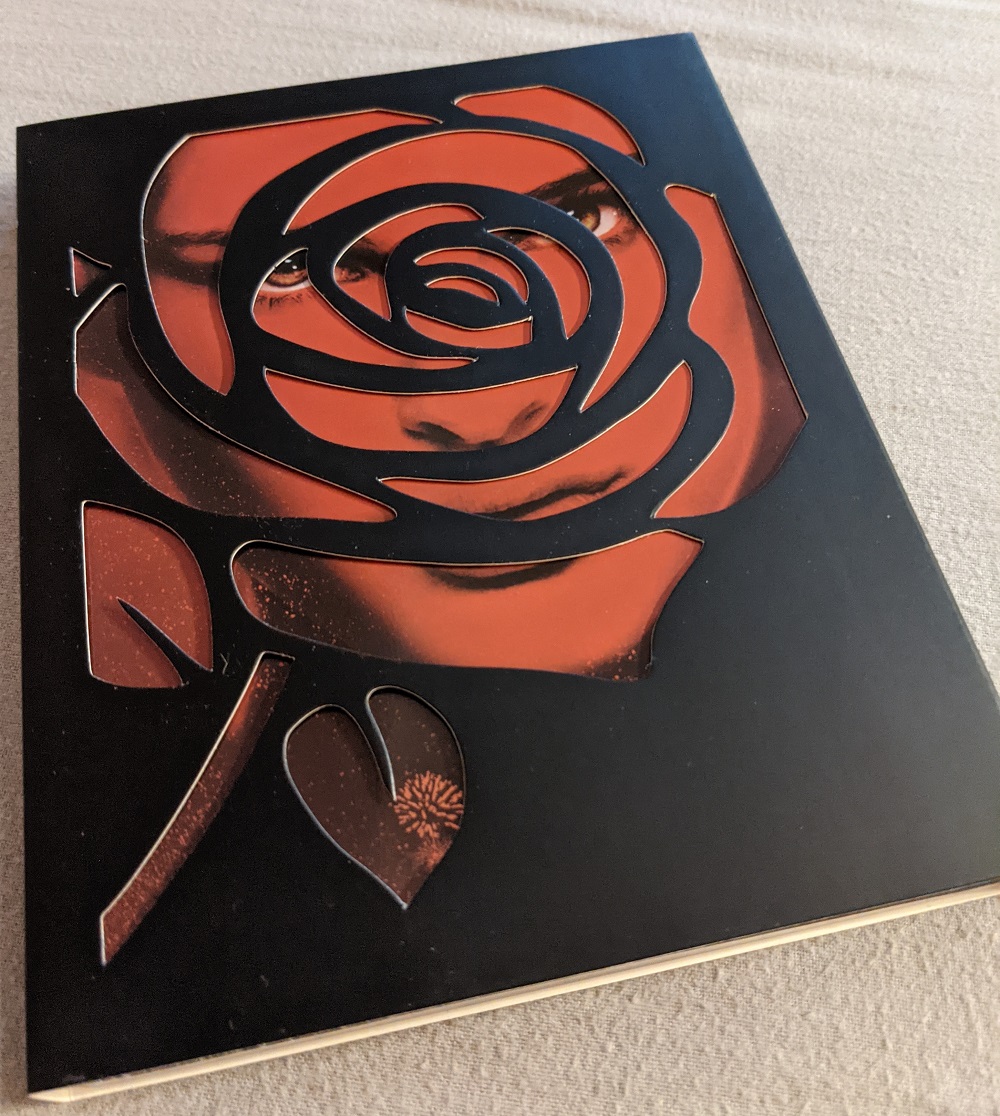 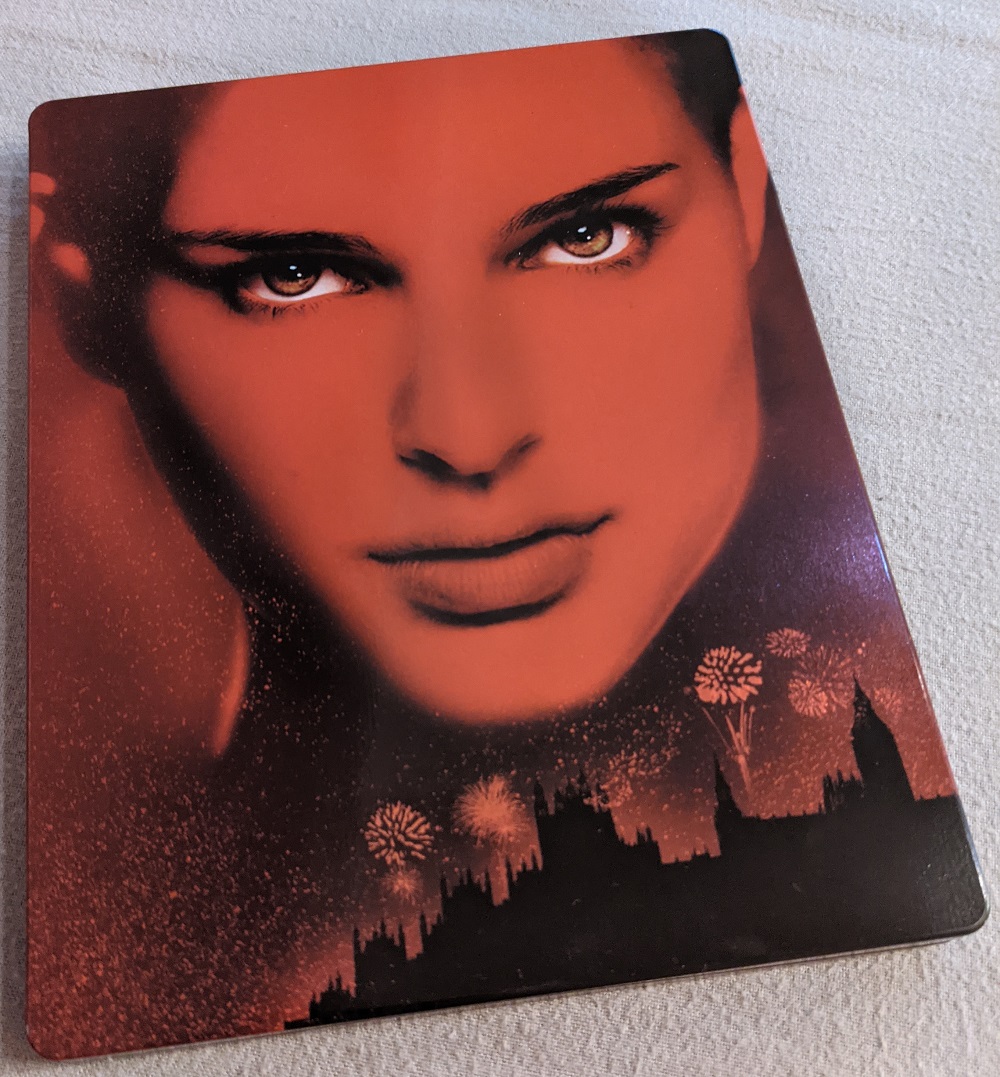 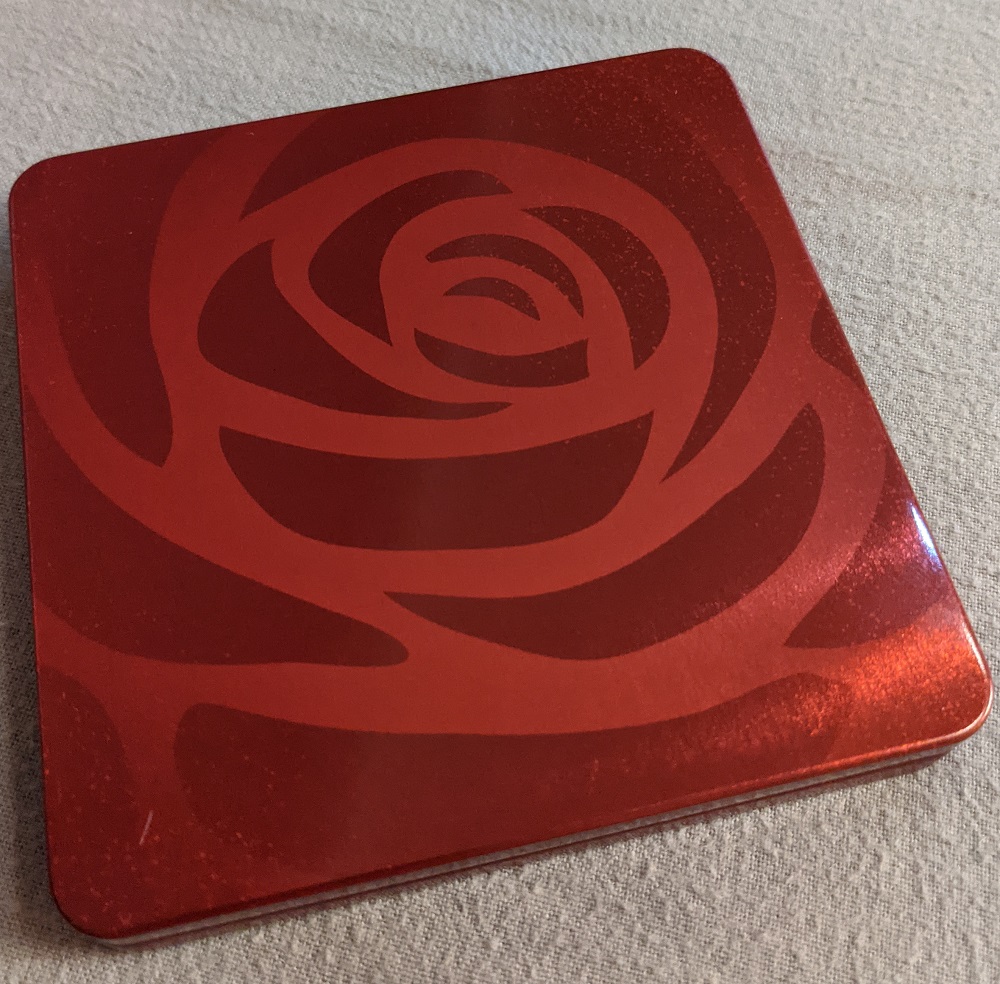 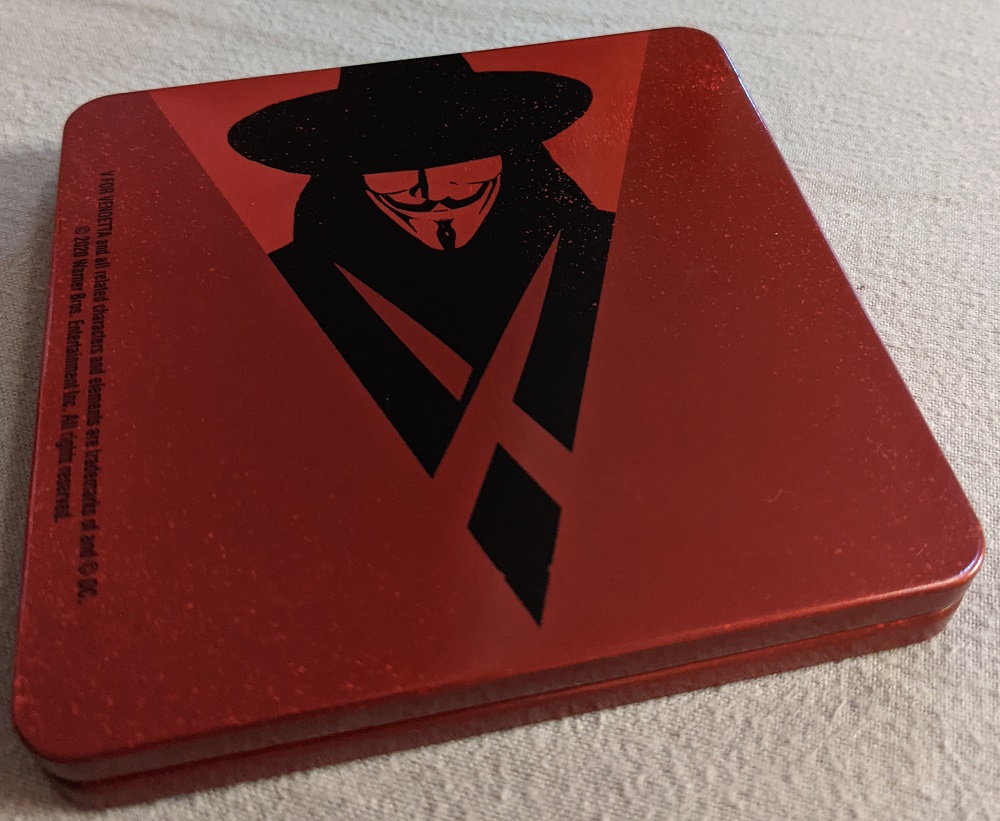 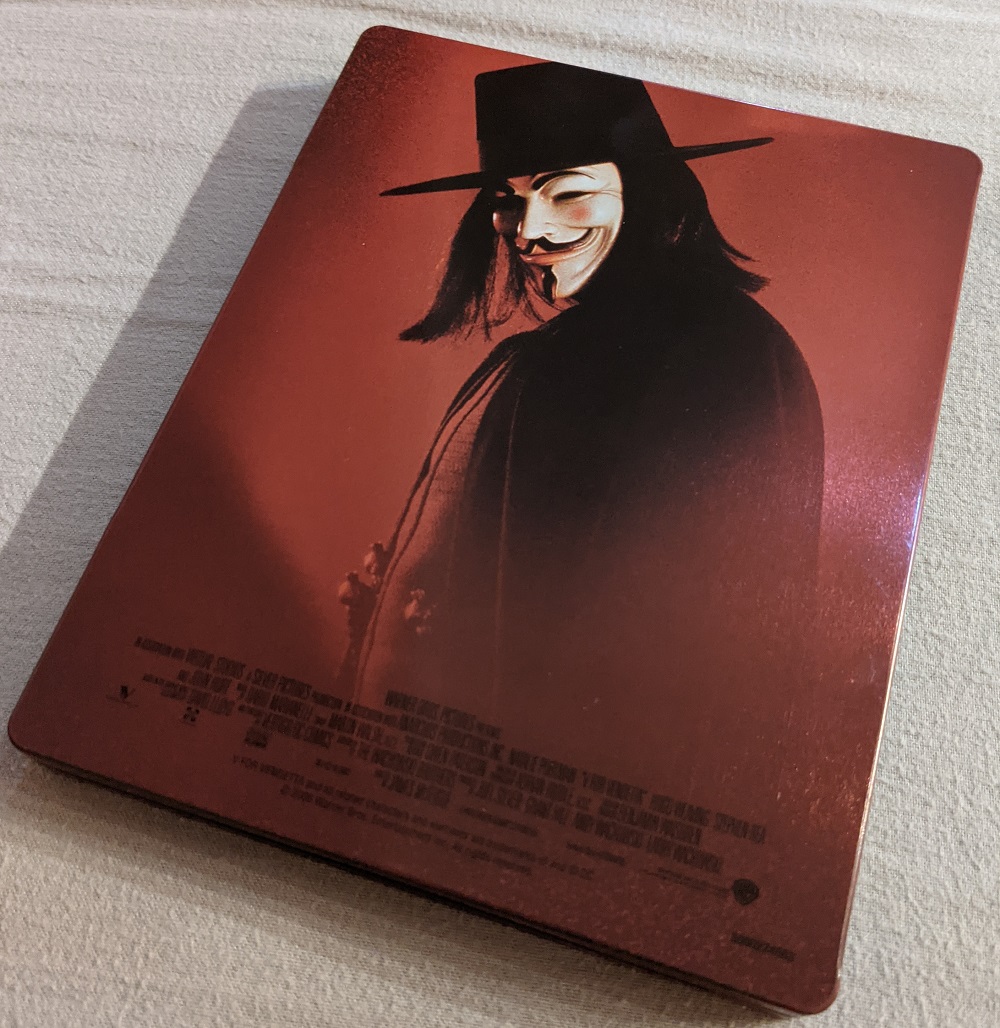 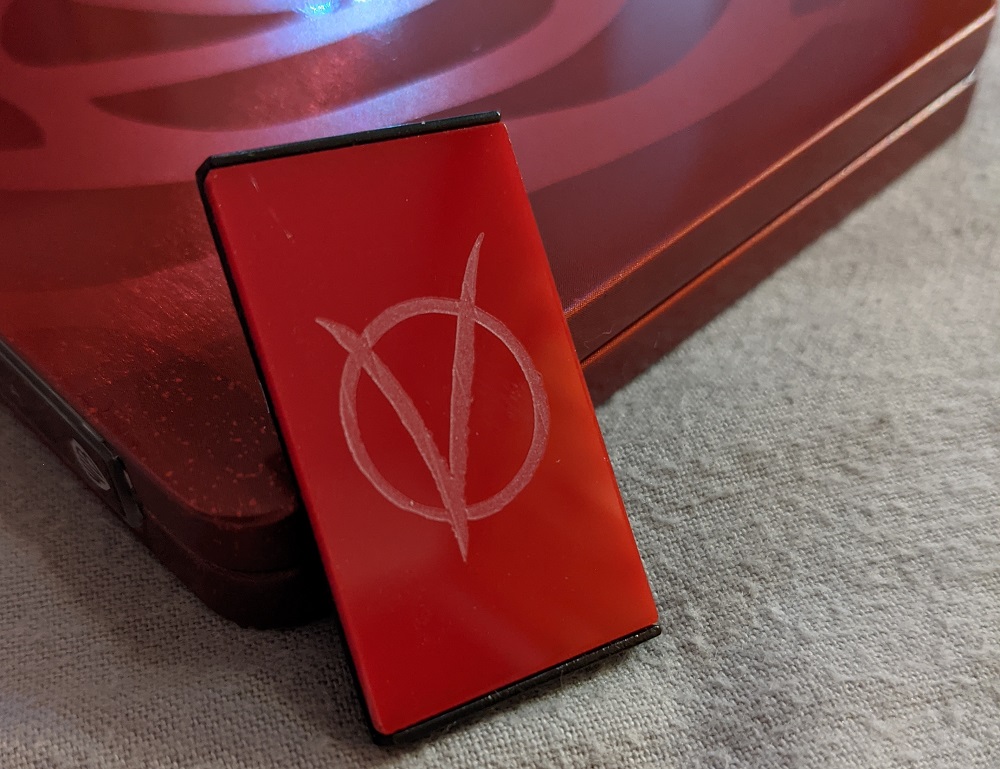