REVIEW – We take a look at the Zoom exclusive Barbarella Steelbook

In the 41st Century, renegade scientist Durand-Durand (Milo O’Shea) threatens the peace when he develops a deadly positronic ray. Scantily-clad astronaut Barbarella (Jane Fonda) is dispatched to deal with the problem, and along the way she meets a blind angel, partakes of the essence of man, has her clothes eaten away by razor-toothed robot dolls, and falls into a hair-raising encounter with the hapless revolutionary Dildano (David Hemmings). Roger Vadim directs his then wife Fonda in this beautiful slice of space-age kitsch.

1968. A year that brought us two classic, ground-breaking, genre defining sci-fi movies, 2001: A Space Odyssey, and Planet of The Apes. And Barbarella…

The last time I sat down to watch Barbarella was over 20 years ago. I lasted about 15 minutes. Needless to say, I approached this new steelbook release with some trepidation.

I’m happy to report that I made it past the half hour mark.

Barbarella is, perhaps more than almost any other film, a genuine product of its time. Bright, trippy, and achingly kooky, it’s everything you love (or hate) about the 60s turned up to 11.

The film makers certainly didn’t let their budgetary limitations hinder their ambition, and while the lack of cash is clear, visually the film is a treat, with inventive, OTT production design filling every frame.

There’s a sense that they’re trying a bit TOO hard though, and the film’s ability to avoid outstaying its welcome will be entirely down to your tolerance levels of all things groovy.

But, like all of those things, it’s something that everyone should try once.

The transfer on this disc doesn’t appear to have had any major restoration or remastering work done, but it’s still a very pleasant watch.

The image is a little soft, but there’s plenty of detail on show, while the all-important colours pop off the screen. There’s nothing noticeable in terms of digital over-tinkering, and the image retains a very natural, film-like look.

There’s no doubt room for improvement should a proper remastering be done, but it’s definitely a good looking transfer.

The audio track is perfectly fine, with just the original mono soundtrack included.

I did notice a few times where dialogue audio wasn’t quite in sync, but there are copious levels of dubbing in the movie, so I put it down to that, rather than an actual fault with the disc.

All we get here is a trailer for the film, which is a real disappointment.

Whether it’s your cup of tea or not, Barbarella is a film that deserves a proper set of extra features. I can imagine there are some pretty bonkers stories from the film’s production, while its continuing influence is definitely worth investigating.

In 2018 the film will be 50 years old, so hopefully Paramount will get their act together by then.

Packaging
While this disc doesn’t contain any additional content, it does come housed in a VERY nice looking new Steelbook release, complete with a cardboard slipcase.

The colours are nice and vibrant, with a few areas of gloss highlights.

The same art can been found on the sturdy cardboard slipcase, which itself has a nice finish, and offers some good protection to the steelbook inside.

Barbarella is one of those films. You know, those ones. The ones where it’s almost unfair to criticise it for what you perceive as everything that’s wrong with it, because those same things are also everything that’s right with it.

For the film itself, I’ll let you be the judge.

As far as this new release goes, the video and audio presentation are very pleasing, given the age of the film.

With any luck, its upcoming 50th Anniversary will be a good enough reason for a proper remastering, and, hopefully, some decent extra features.

The steelbook packaging is of course the main draw here, and thankfully it’s a great looking edition, sticking with the poster art and avoiding any meddling. 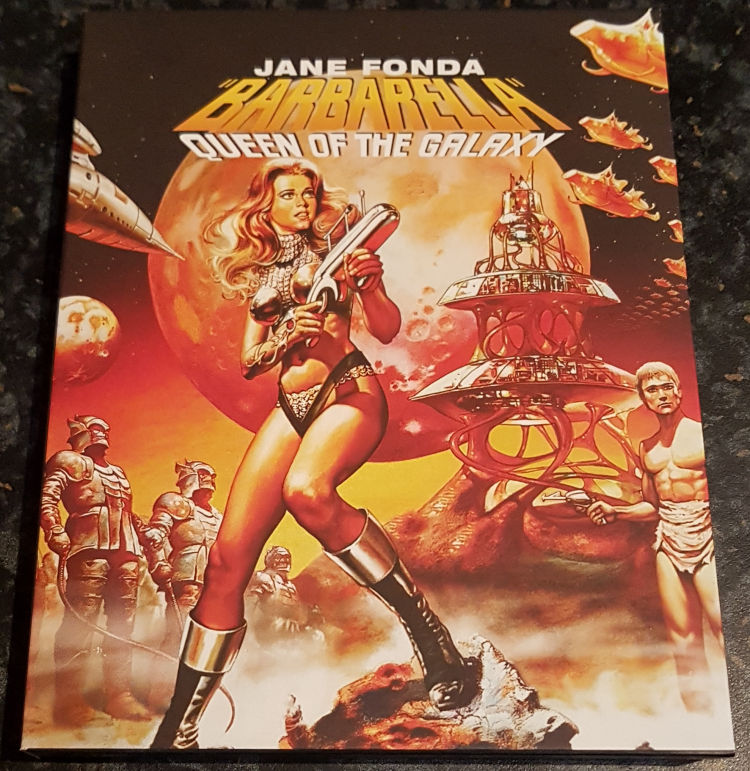 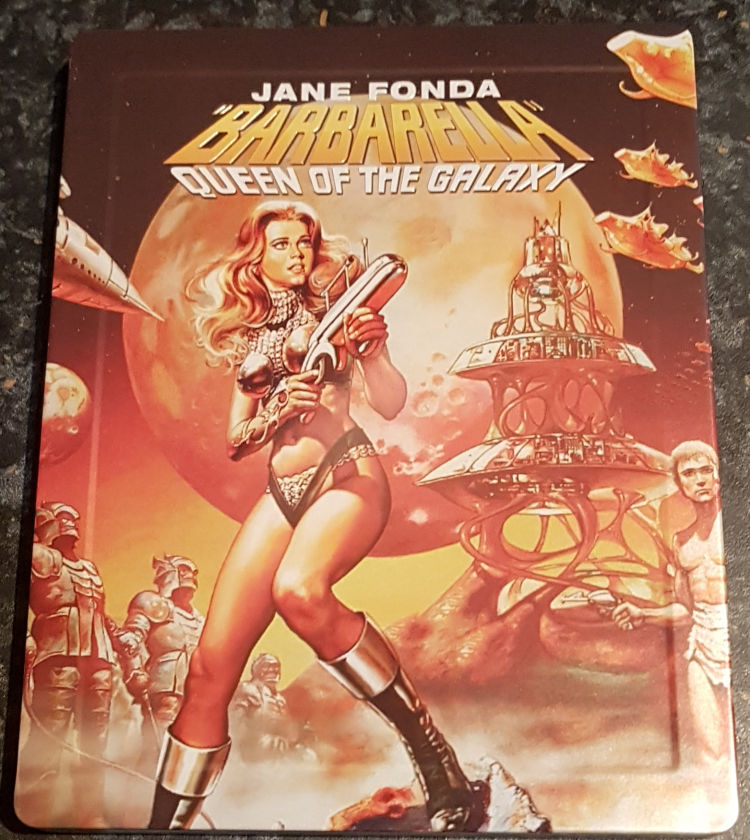 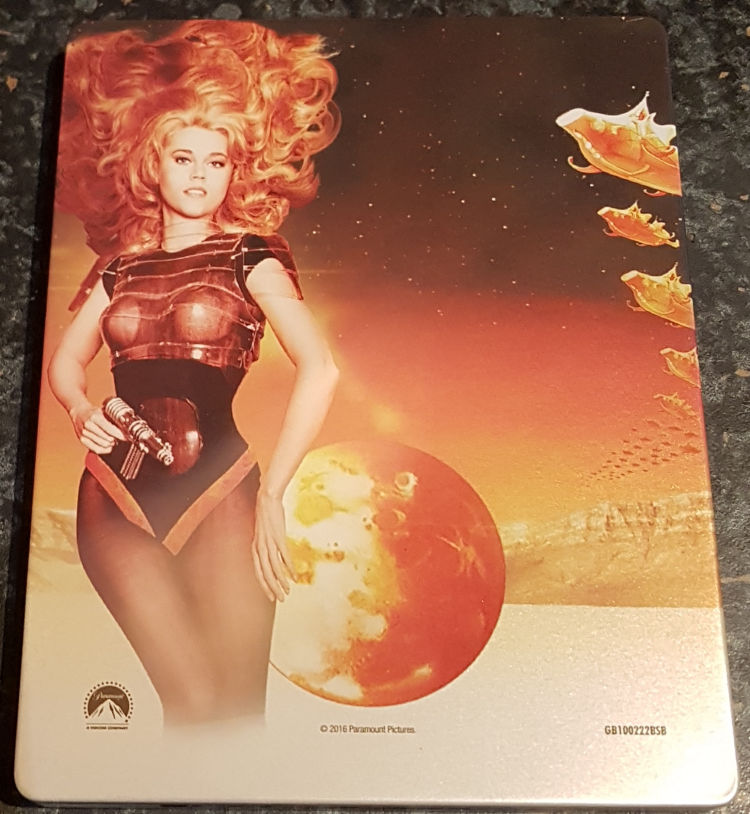 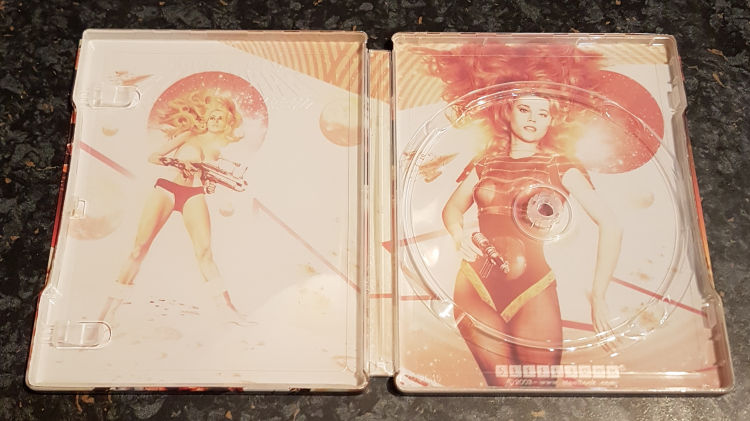