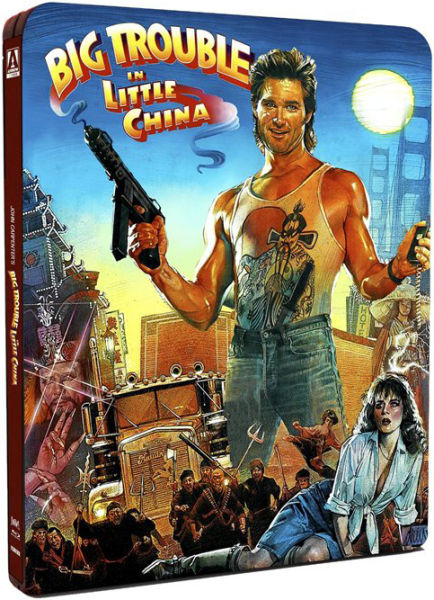 Big Trouble in Little China is one of those movies that pretty much everyone has heard of, but many may not have seen before.

Well, thanks to UK indie label Arrow you can take a fresh look at this 80s cult classic, from director John Carpenter.

The movie hits the ground running, as we are introduced to  Jack Burton (Kurt Russell), a truck driver helping out his  friend Wang Chi pick up his fiance from San Francisco airport. When the fiance is kidnapped, the pair give chase, ending up in Chinatown, and stuck in the middle a backstreet gang brawl

It turns out that the fiance, with her striking green eyes, is needed by the immortal sorcerer Lo Pan, in an attempt to return to physical form. Burton and Chi naturally set off to save the day.

What follows is a real mish-mash of genres, as the movie flits between comedy, action, horror and martial arts. Carpenter certainly deserves credit for being ahead of the pack in bringing the wilder wire-fu action of Asian cinema to western audiences, even if the box office results suggested they weren’t quite ready for it at the time. Certainly, some of the action may look a little stagey and wooden to viewers more familiar with the graceful action from the likes of The Matrix, Crouching Tiger Hidden Dragon or Hero, but for its time it was definately something really fresh.

The mix doesn’t always quite work, but the movie is held together by Carpenter’s solid direction and a magnetic central performance by Russell as the cock-sure, heroic, but bumbling Burton. Russell shows his talent for physical comedy here following his more serious and subdued roles in Carpenter’s Escape From New York and The Thing.

The supporting cast is filled out with quite a few recognisable faces, such as Dennis Dun as Wang Chi, a pre-Sex and the City Kim Cattrall, and character actors James Hong and Victor Wong.

Carpenter and Russell have one of those rare director/actor relationships where the movies they make together are always worth a watch, and this movie is no exception. Wouldn’t it be great if they could team up again?

This release is billed as coming with a new restoration supervised the movie’s cinematographer Dean Cundey, a veteran of Carpenter movies, including Halloween, The Fog, Escape From New York and The Thing. Cundey has also worked on bigger hits including the Back to The Future trilogy, Who Framed Roger Rabbit and uber-blockbuster Jurassic Park.

The opening scene had me a little worried, as there seemed to be some very slight colour and brightness fluctuation, but after a minute or so that all disappeared and we end up with a truly fantastic transfer.

Cundey and his restoration have done a great job here, ensuring colours pop off the screen while never being overblown. The image is wonderfully detailed, with strong black levels and not a hint of DNR or artificial edge enhancement.

Carpenter is famous for using the whole of his cinemascope frame from edge to edge, and this transfer captures every inch perfectly.

Does it have the high gloss sheen of a modern movie? No, but it’s a faithful representation of the original film, grain and all, and it’s brilliant.

For the audio, we get a choice of 5.1 DTS-HD and 2.0 stereo tracks. Given the age of the movie, it would be wrong to expect an all-action, multi-channel feast for the ears, but we do get a very nice soundtrack cleanup.

The tracks are free of hiss and crackles, with clear dialog. There’s not a massive amount going on in the way of directional effects, but the rear channels do help fill out the soundscape with atmosphere.

As an aural bonus, we also get an isolated score in 5.1 DTS-HD, which is a welcome touch.

We get a great selection of extra features on this release, some old and some new.

First up is a commentary track with John Carpenter and Kurt Russell. While not new – it’s carried over from the old DVD – it’s a great listen. Carpenter and Russell have a great chemistry, and their friendship really comes across here. The refreshingly candid track is full of laughs and anecdotes, and is highly recommended.

Next up is a selection of newly recorded interviews, totalling almost 90 minutes. We get to hear from Carpenter and Russell of course, as well as Dean Cundey, producer Larry Franco, stuntman Jeff Imada and VFX producer Richard Edlund. These are all interesting to watch, as the participants recall their experiences working on the movie. It’s fair to say that given the movie’s initial failure to set the box office alight, none of them could have imagined that they’d still be talking about it today.

Next we get a vintage ‘Making of’ featurette, and a selection of deleted scenes. The quality of these outtakes does vary, as some have been sourced from video rather than film, but they are worth checking out to gain an insight into how a movie is shaped during the post-production process, as does the extended ending, which brings a proper bit of closure to one of the story strands in the movie.

On-disc extras are rounded out with a music video, behind-the-scenes image gallery, trailers and TV spots.

Also included in the package (but unfortunately not with the review disc I received) is a booklet with new writing by John Carpenter expert John Kenneth Muir, and reprint of an interview with production designer John Lloyd and make-up FX artist Steve Johnson. The booklet is illustrated with a selection of stills and posters.

This new release is available in steelbook packaging, featuring the original artwork by the legendary Drew Struzan. You may not recognise the name, but Struzan has provided the artwork for some of the most iconic posters in movie history, including the Indiana Jones, Back to The Future and Star Wars trilogies, Blade Runner, Harry Potter – the list goes on. If you want to read more, there are a couple of excellent books that you can pick up here and http://www.amazon.co.uk/gp/product/0857685570/ref=as_li_ss_tl?ie=UTF8&camp=1634&creative=19450&creativeASIN=0857685570&linkCode=as2&tag=steelbookbluray-21.

For the non-steelbook release, Arrow present the movie with a reversible, featuring Struzan’s artwork on one side and a newly commissioned piece by Jay Shaw.

One quick word of praise for Arrow – they seem to be one of the few companies who don’t insist on making the viewer sit through endless menu options, forced trailers and other guff, instead getting us to the main menu in seconds. Compare that to studios like Universal whose discs seem to take forever to get to the point where you can actually watch the movie. Thank you Arrow for getting us to the movie quickly!

This is another quality release from Arrow. An iconic 80s action comedy, the perfect pairing of director and actor and ahead-of-its-time kung-fu action, it’s great to be able to re-visit Big Trouble in Little China after all this years, and find it in such great shape.

The new transfer on this disc is a corker, and I dare say the movie hasn’t looked or sounded as good as this since the day it was released.

There’s a great selection of new and old extras. The star of the show is the classic commentary, but the new interviews are great as well.

Whether you want to re-kindle your memories of the movie, or are a new viewer wanting to see what all the fuss is about, this is fantastic release.

It’s available now, either directly from Arrow’s website or from all good – and a few evil – retailers, including Amazon and Zavvi.