From Marvel, the studio that brought you the global blockbuster franchises of Iron Man, Thor, Captain America and The Avengers, comes a new team–the Guardians of the Galaxy. An action-packed, epic space adventure, Marvel’s “Guardians of the Galaxy” expands the Marvel Cinematic Universe into the cosmos, where brash adventurer Peter Quill finds himself the object of an unrelenting bounty hunt after stealing a mysterious orb coveted by Ronan, a powerful villain with ambitions that threaten the entire universe.

To evade the ever-persistent Ronan, Quill is forced into an uneasy truce with a quartet of disparate misfits–Rocket, a gun-toting raccoon; Groot, a tree-like humanoid; the deadly and enigmatic Gamora; and the revenge-driven Drax the Destroyer. But when Quill discovers the true power of the orb and the menace it poses to the cosmos, he must do his best to rally his ragtag rivals for a last, desperate stand–with the galaxy’s fate in the balance.

The formula. The greatest strength of the Marvel Cinematic Universe (MCU), and also its greatest weakness. Starting with the first Iron Man movie, Marvel hit the ground running and struck all the right notes – charismatic leading man, a nimble wit, spectacular action and a plot that lays the ground for adventures ahead. Their movies have also been guilty of repeating several now familiar tropes across movies. A bad guy with a bigger, more powerful suit, airborne battles with mass destruction of property, characters apparently dying only to re-appear, alive and well. You get the picture…

Now don’t get me wrong – I love the MCU, and the huge world that it inhabits on the big screen, TV and Netflix. But let’s be blunt – while Agents of SHIELD, Agent Carter and the Netflix shows add depth, history and a ‘bigger picture’, the movies DO play it safe, at the risk of getting a bit samey. Captain America: The Winter Soldier did a great job of switching genres to consiracy thriller, while this year’s Ant-Man defied the odds of losing Edgar Wright to become a terrific action comedy. Even those two, though, reverted to cliche, with heli-carriers destroying the Triskelion and an (admittedly inventive and funny hilarious) Ant-Man vs Yellowjacket showdown, respectively.

The only MCU movie to REALLY try something new (so far) is James Gunn’s Guardians of The Galaxy, and the result is a triumph – a movie that manages to match the best in scale and spectacle that other classic space opera franchises have to offer, while also blowing the MCU wide open in terms of where in the universe the stories could go.

Whereas the rest of the Phase 1 & 2 MCU movies have been (primarily) Earth-bound, GotG spends less that 5 minutes here, before heading off-world. The movie brings us a whole bunch of characters we’ve never seen before, as well a proper introduction to Thanos (following his brief cameo at the end of the first Avengers movie), and laying the seeds of a plot-line that will carry through much of Phase 3, concluding in the epic 2-part Avengers: Infinity War. I mean, how ballsy is that?

Very ballsy indeed – to the general public, GotG was not as high profile as the Avengers characters, and yet Marvel put their trust in writer/director James Gunn. Gunn, of course, wrote and directed the excellent – though hardly smash hit – sci-fi horror comedy Slither, and also wrote the far-better-than-anyone-expected Dawn of The Dead remake. Oh yes, he also wrote the two live action Scooby Doo movies.

While many of the MCU movies have a somewhat darker, or at least serious tone, GotG often borders on comedy, even with the threat from Thanos looming in the background.

Gunn’s script is extremely effective, managing to introduce a whole new set of characters, a lot of exposition, and some great action and laughs, while never feeling rushed or over-loaded.

Performances are great all round, especially from leading man Chris Pratt who, with this and Jurassic World, has launched his big screen career in style. Special mention should be made of ex-wrestler Dave Batista, who shows some unexpected comedy talent as the alien Drax, as well as the voice performance of Bradley Cooper, who gives the CGI character of Rocket Racoon real depth. And of course it’s the only film where Vin Diesel’s wooden style has fitted his character perfectly.

Guardians of The Galaxy is just the shot in the arm that the MCU needed, and I can’t wait to see what the sequel brings, and how the movies gets tied into the rest of Phase 3.

Presentation
This new release carries over the previous transfer, which is excellent. The production design of the movie is full of intricate detail, while the cinematography covers the full range of bright daylight, deepest shadows and brightest neon, all of which are captured perfectly on this disc.

The soundtrack is equally impressive. Dialog remains clear at all times, soundstage is used to full effect, both with atmospheric sounds and directional effect.

The highlight of the soundtrack is of course the brilliant selection of songs, and these all come across loud and clear.

Again, the extras here are carried across from the previous release, and they’re a little on the light side compared so some releases. We get a couple of behind the scenes featurettes, a preview for the Avengers: Age of Ultron, a very funny gag reel, and some deleted and extended scenes. The highlight is a very informative and fun commentary from James Gunn.

Also included, for those tempted by such things, is the 3D version of the movie.

Of course, we’re looking at the new Zavvi exclusive steelbook here. Their previous edition was the fantastic ‘walkman’ style design, which was a tough act to follow.

So what to we have here? This release uses a great group shot of the gang on the front, with a image from the huge prison set on the back, all with fantastic, punchy colours. There’s some ebossing on the logo lettering (not my personal preference, but there we are…). Also of course is the removable magnetic lenticular version of the front art. That’s not so impressive but makes a good fridge magnet.

So is this better than the original release? Difficult to say, but at least with this range of re-releases Marvel and Zavvi are trying to give us something different with the artwork. As is common with Marvel releases it’s not cheap, though at the time of writing there is an offer available that will save you a bit.

Double-dipping aside, this IS a great looking release, and definitely worth a look, whether or not you own the original. 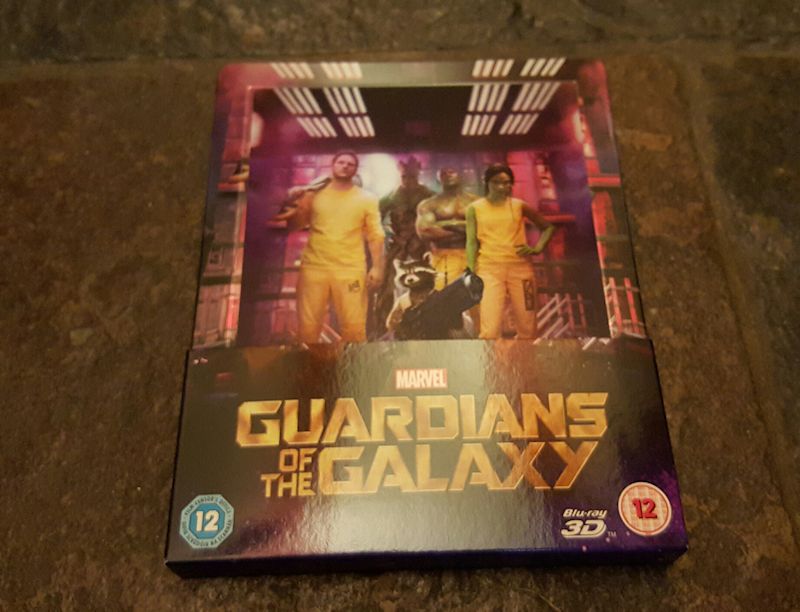 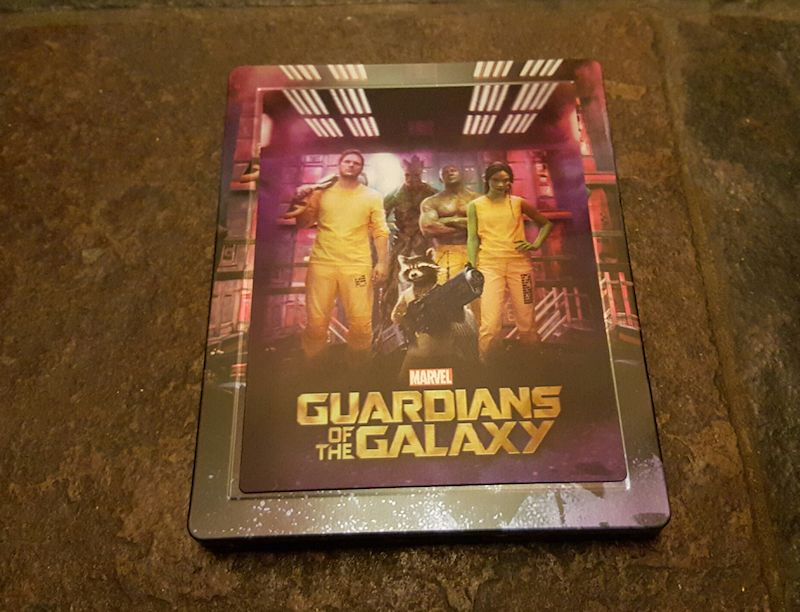 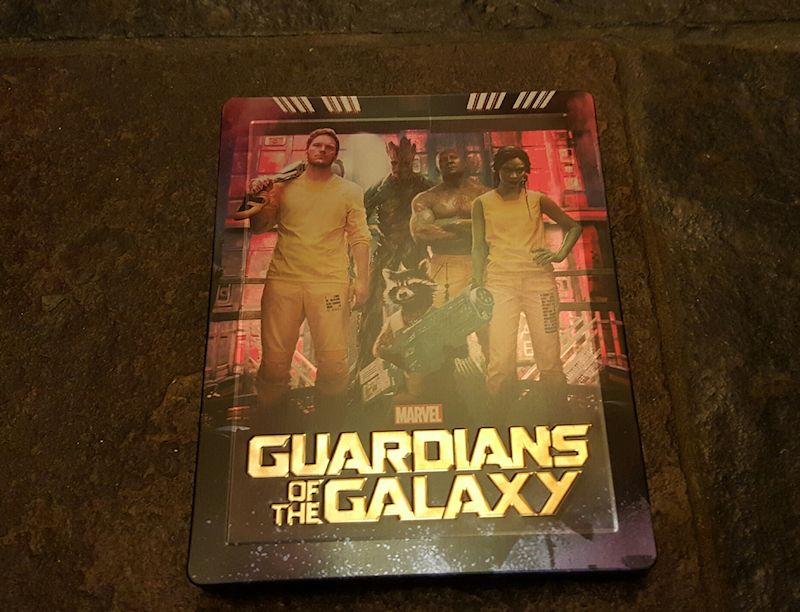 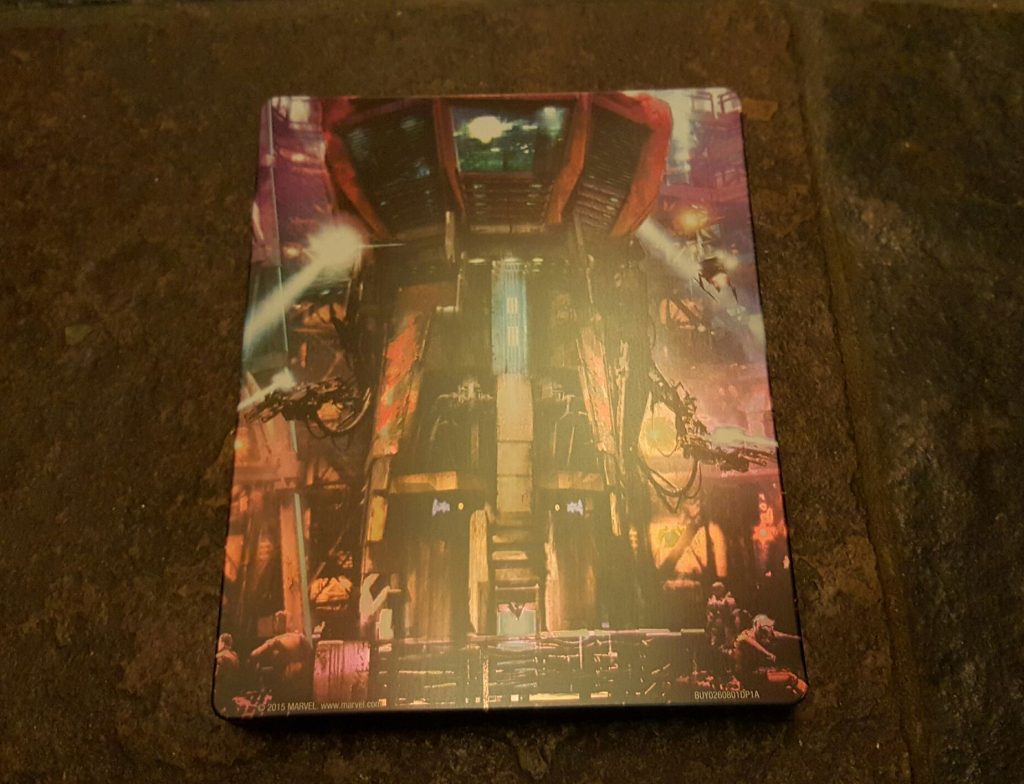 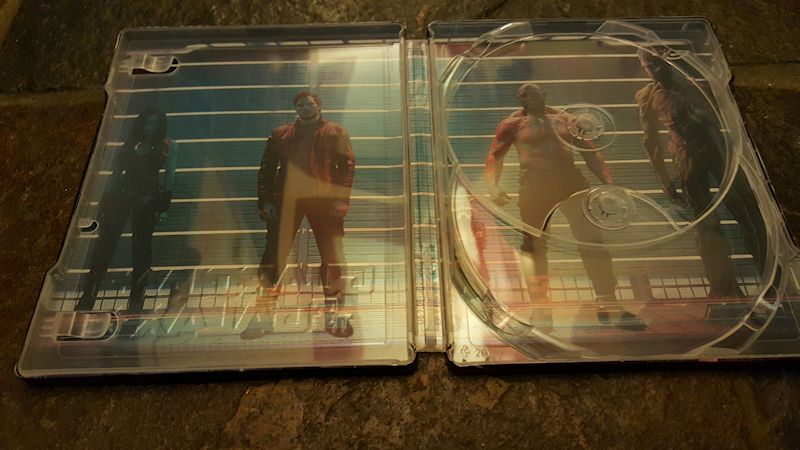