REVIEW – We take a look at the new 4K Steelbook Titans of Cult release of “Mad Max: Fury Road”, from the director of Babe: Pig in The City and Happy Feet

The Titans of Cult series of collectors edition steelbook releases got off to a great start with Blade Runner and Wonder Woman, and now the third release is with us – the epic Mad Max: Fury Road.

He never forgot about Max though, and his plans for a fourth movie began in the late 90s, initially with original star Mel Gibson. After years of setbacks and delays, including budget, location, weather, and security concerns (not to mention Gibson’s…. issues…) production finally began in 2012 with new leading man Tom Hardy, joined by co-star Charlize Theron as Imperator Furiosa, who gets as much, if not more, to do than Hardy himself.

Upon its release in 2015, it’s fair to say the Mad Max: Fury Road re-wrote the rule book on action cinema. The story is admittedly thin on the ground, but that’s fine, because Fury Road is all about the action and the visuals, with Miller, in his late 60s at the time of production, thoroughly schooling younger film makers with exquisitely choreographed, filmed, and edited action. No matter what’s happening on screen, Miller clearly sets out the geography of the action, so you know who is where, and what they’re doing at all times, and it’s often breathtaking.

Director Steven Soderbergh summed it up best when he said:

Yes, there is CGI used throughout the film, but the amount of real action (as shown in the extra features) on screen is staggering. The film was a deserved hit at the box office, and rightly won praise from critics and fellow film makers alike – indeed the film received Oscar nominations for Best Picture and Best Director – rare for an action film – and won six Oscars, including ones for editing, design and sound.

Five years on from its release, there’s still nothing to match the film in terms of vehicle-based action, though Miller is now planning a film centered around younger years of the Furiosa character, so hopefully we won’t have to wait too much longer.

Mad Max: Fury Road isn’t just a film – it’s an experience. So find the biggest screen you can, and the loudest speakers, and strap yourself in.

Video
This 3 disc release gives you the choice of the regular version of the movie on 4K and Blu-ray discs, with the ‘Black & Chrome’ version on Blu-ray.

The star of the show is naturally the 4K version. While based on a 2K DI, upscaled to 4K, the image on this disc shows a huge amount of detail. Fine textures like wear and tear on the vehicles and clothing come through well, while the HDR provides a great boost to the already vibrant colour palette, along with bright, but never blown-out highlights, and impressive shadow detail. Fury Road was one of Warner’s initial 4K launch titles in early 2016, but the transfer still holds up today, and is a great example of how the format can improve over an already great Blu Ray transfer.

Speaking of the Blu-ray, there’s obviously a dip in impact compared to the 4K disc, but be in no doubt this is still a superb transfer, and pretty much reference quality as far as HD goes. Once again, there’s plenty of detail, colours pop, and highlights and shadow detail are very impressive for the format.

The third disc brings us the Black & Chrome version of the movie on Blu-ray. This isn’t just the existing version with the colour taken out, but a separate transfer entirely, optimised specifically for a black and white presentation. The high contrast, monochrome image certainly looks impressive, once again packing in plenty of very crisp detail. The film loses none of its impact in black and white, and in some cases the lack of colour does help some of the CGI-enhanced carnage blend in more to the live action footage.

Audio
As visually spectacular as the film is, it would be nothing without its soundtrack, and thankfully all three discs get the same stunning Dolby Atmos audio mix. Directional and immersive effects are expertly done, as you’d expect, as the sounds of vehicles, explosions, and debris move around the room in perfect sync with the on-screen action, and they’re accompanied by some thunderous bass.

Dialog is still clear above all the mayhem, and in the few quieter moments, the mix shows a lot of subtlety. Meanwhile, Junkie XL’s score keeps things moving at a tremendous pace, and is equally immersive, making full use of all the speakers in your setup.

Extras
On-disc extras are unchanged from the film’s previous releases, meaning that the 4K disc is movie-only, while the Black & Chrome disc gets a brief introduction to that version of the movie from George Miller.

That means that the rest of the extras, totaling just over 90 mins, are on the regular movie disc.

There’s a selection of featurettes, covering pre-production and planning, production design, filming, stunt work, the design and building of the props and vehicles, character profiles, and so on, as well as three short deleted scenes.

The highlight of these pieces is undoubtedly the behind the scenes look at the stunt work. While the finished film does use some mostly unnoticeable CGI – things like background replacement, wire removal and so on – it’s always impressive to see just how much stunt work was done for real.

Packaging
This release of Mad Max Fury Road is the third to come from the Titans of Cult label, following on from Blade Runner and Wonder Woman.

With this series it’s all about the packaging, so let’s see what we get.

As usual, everything is housed in a great looking clear plastic case, with artwork printed directly on it. The see-through areas free from art give a glimpse at the goodies inside.

First up, the 3 movie discs are housed in a newly-designed steelbook, and I have to say this is stunning piece of work. The artwork itself, based around an iconic steering wheel design seen in the film and some previous marketing materials, is excellent, and accented with some subtle glossing and embossing.

Next, as usual for ToC releases, is an exclusive, themed pin badge. Once again this is well designed, and feels solidly built.
New to this edition is an additional mini steelbook, which doubles as storage for the pin badge. The Blade Runner release included cardboard drinks coasters, while Wonder Woman came with a poster. While both of those were nice enough, the mini steelbook included here is a much better idea, with another great design, and gives the whole package a feeling of much more value for money. Hopefully we’ll see this format used again in future release.

Of the three Titans of Cult releases so far, I think this is the best one yet. The main steelbook artwork is easily on a par with the excellent Blade Runner one, while the inclusion of the additional mini steelbook a definite improvement over the coasters and poster we’ve seen previously. 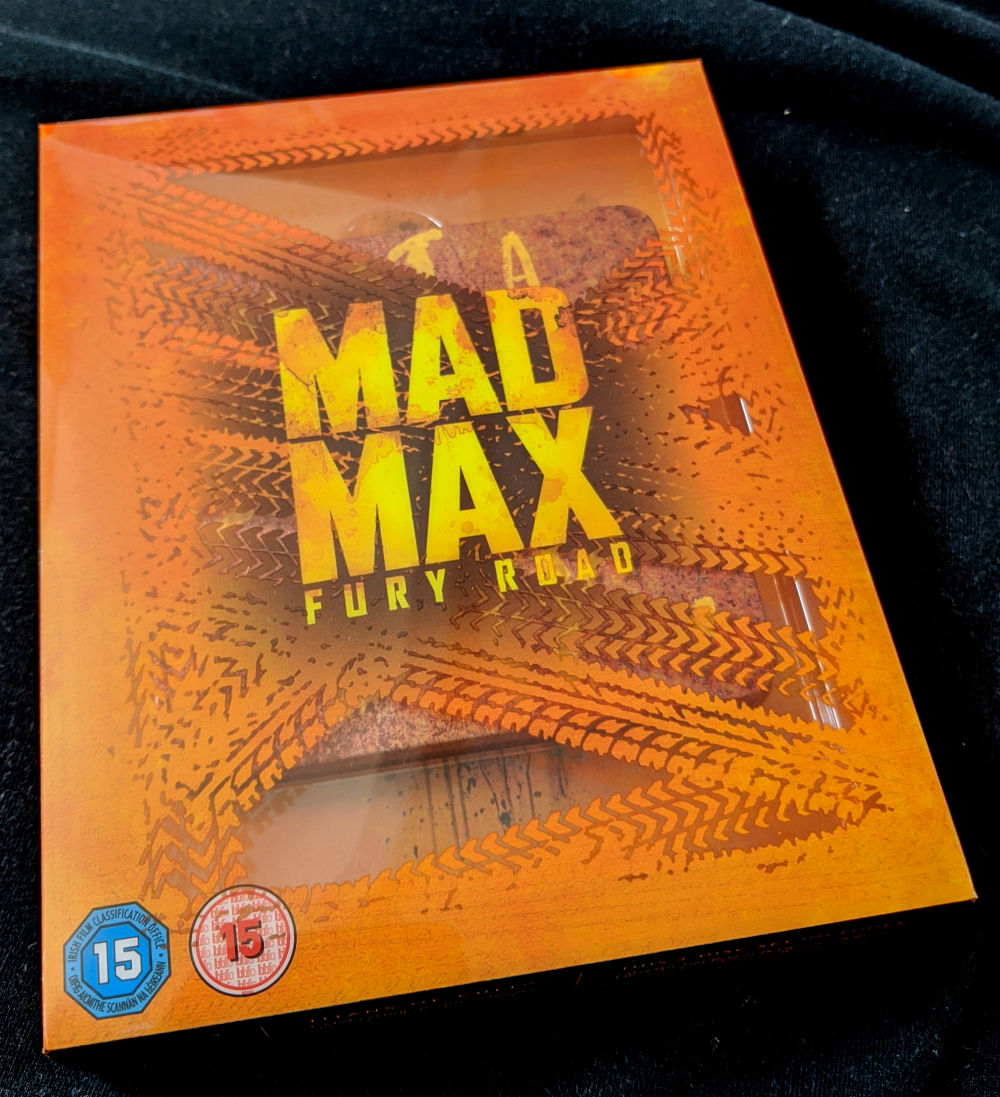 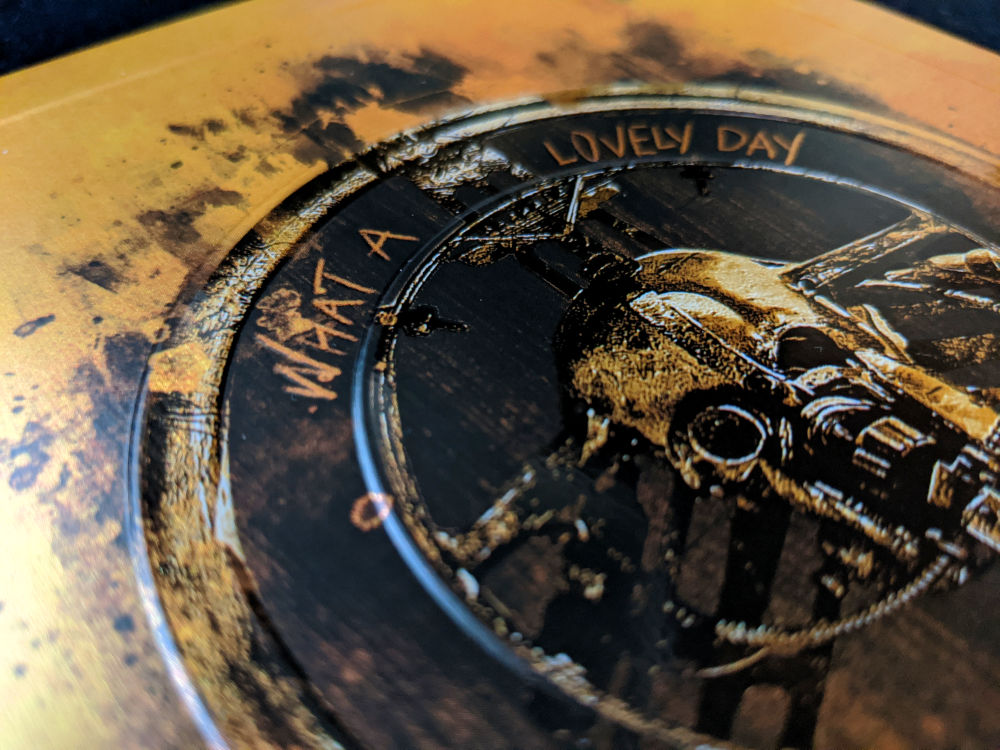 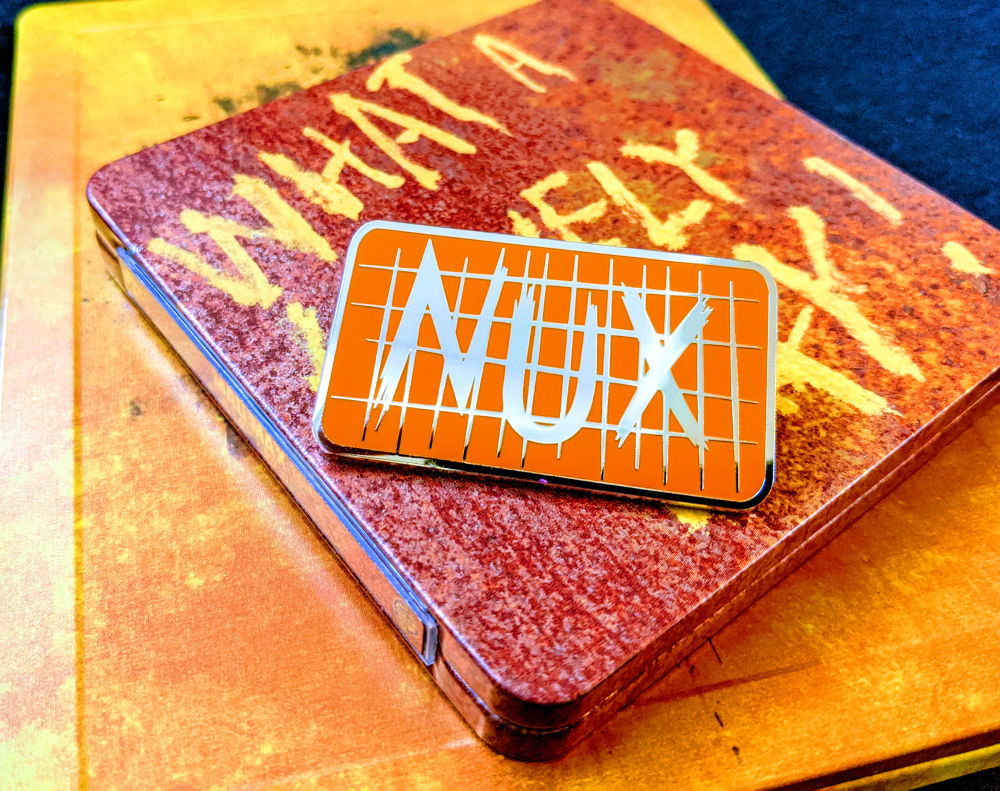 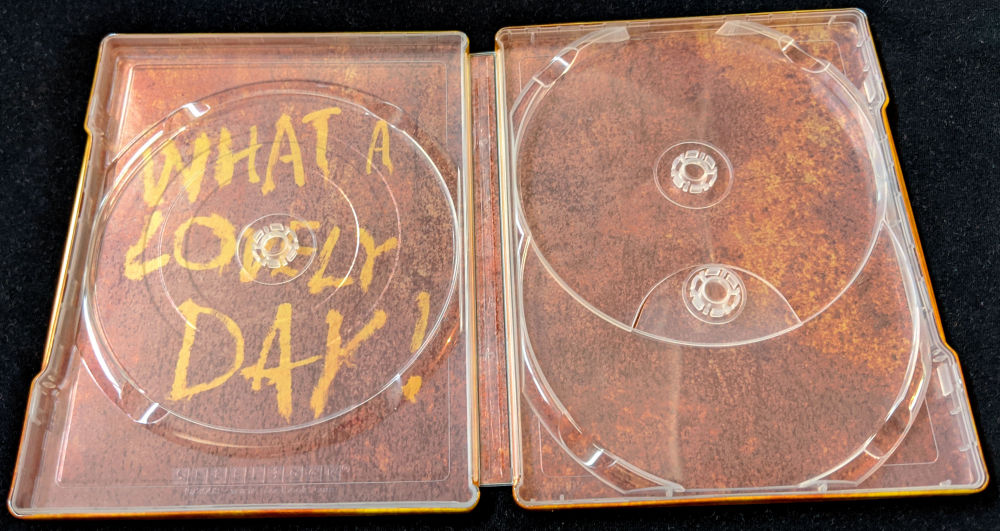 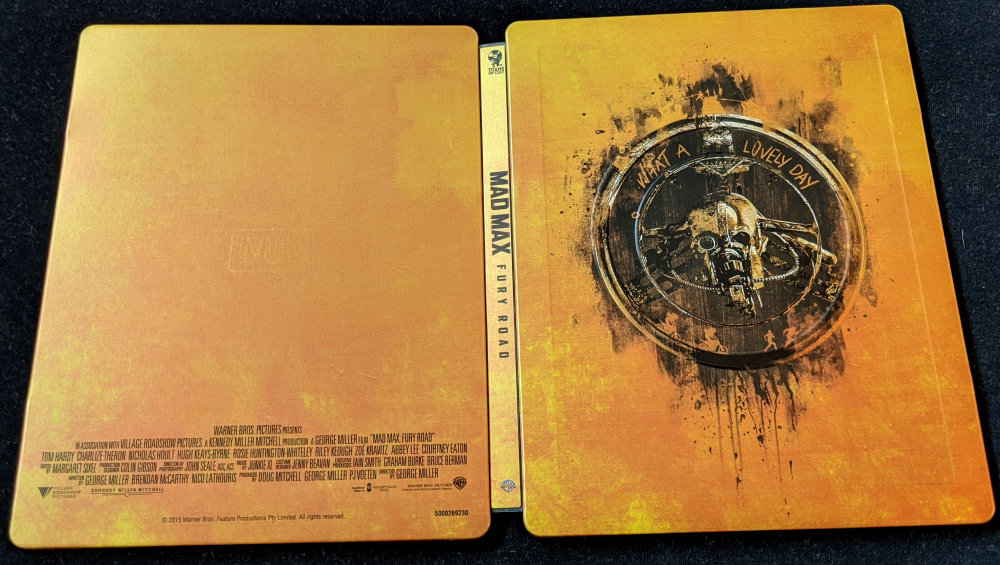 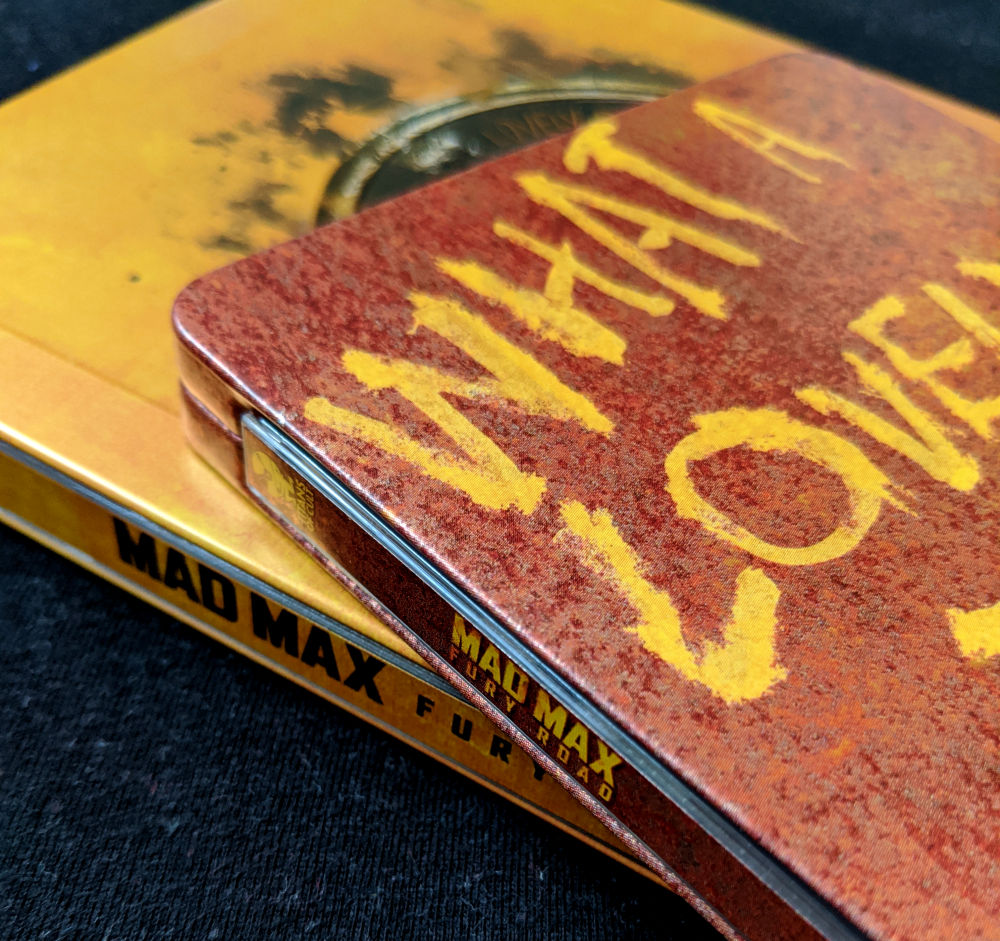 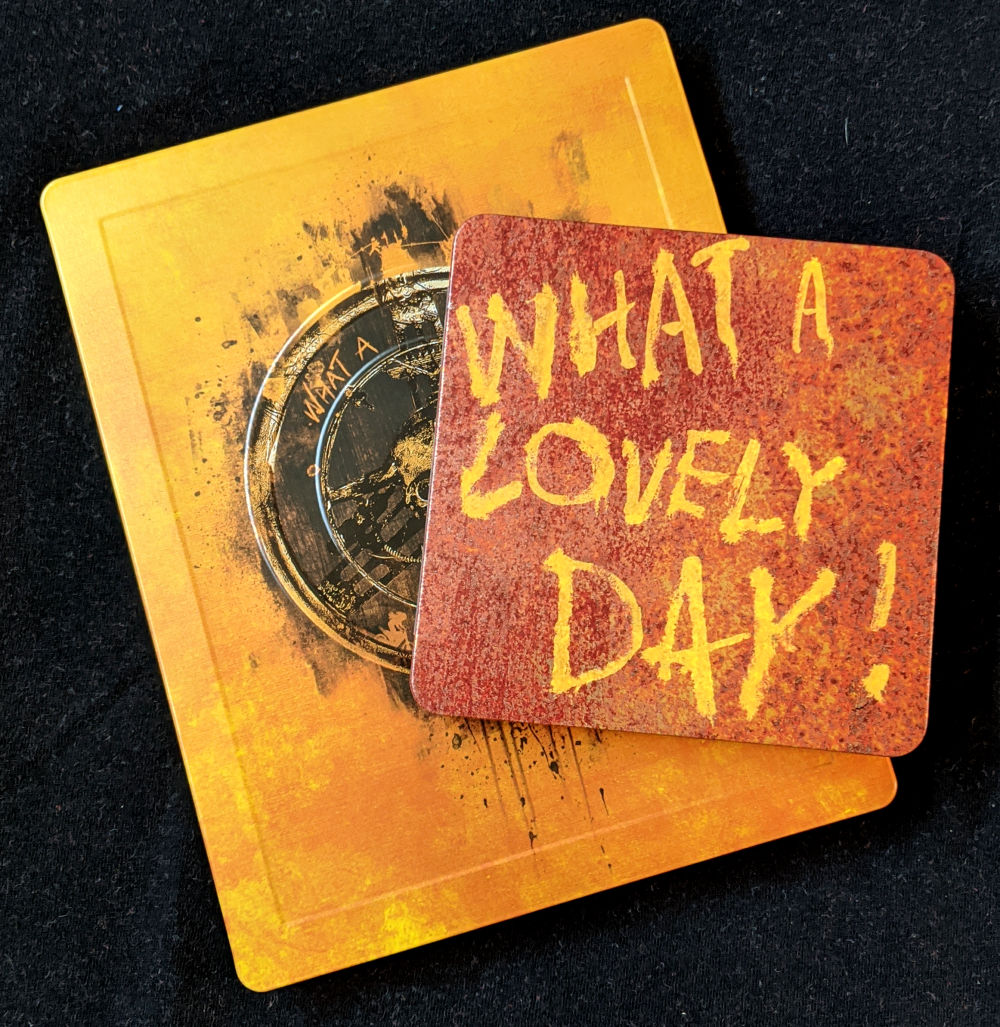