Film
It’s 1937, and Jake Gittes is a Los Angeles private eye, hired by Evelyn Mulwray, who suspects husband Hollis, a high-ranking local government official, of having an affair. Gittes gets to work, and news of the scandal soon hits the press, but it looks like it was an imposter who hired him, rather that the real Mrs. Mulwray. When Hollis is found dead – possibly murdered – Jake is dragged into tale of political and bureaucratic corruption, murder and some very dark family secrets.

Having never seen Chinatown before now, a tale revolving around the shady dealings of municipal water supply did not sound like the basis of the most thrilling of detective mysteries.

I do like being wrong sometimes. What we here is a great noir thriller, and writer Robert Towne’s plot moves along at a cracking pace, revealing layers of detail and twists right to the very end, while keeping all the various threads in place.

Roman Polanski directs with a sure eye and composes some beautiful shots, without ever being too flashy.
All of the cast are great, including Faye Dunaway as Evelyn, and John Huston as her father Noah Cross, a man who knows far more than he’d letting on.

It’s Jack Nicholson’s show though, and as Jake Gittes he’s on top form. He’s utterly believable as a dogged PI – charming, scheming and tenacious. With this film in 1974, and One Flew Over The Cuckoo’s Nest in 1975, the mid-70s saw Nicholson at the top of his game, with a pair of effortless performances.

I don’t want to go into the plot too much, because it really is better coming to it fresh, but if you haven’t seen Chinatown yet, then really, do yourself a favour and get it watched.

Video
The transfer on this disc is very nice indeed. Nothing cutting edge, or eye-wateringly sharp, but there’s an impressive amount of fine detail on show, while the grain gives the image a natural, film-like look.

While black levels and contrast are also good, with plenty of detail in the shadows, where the transfer really shines is its colour palette. Many scenes appeared to have been shot during the fabled ‘magic hour’, giving the film an incredible warm, golden glow, which is perfectly reproduced here.

The image is a little soft at times, but that’s forgivable given the age of the film. Overall though, it looks really good.

Audio
The main English track here is 5.1 Dolby True HD, and it’s absolutely fine, though not exactly exciting.
To be fair that’s not really surprising, given that the original soundtrack is mono. The extra channels don’t really do anything exciting, mainly just serving to give the score a bit more room to breathe.

The audio itself is clean and free from hiss and other background noise, with dialogue remaining clear throughout.
It’s a bit of the shame the original mono track isn’t included.

Extras
Here’s where the only real disappointment with this release can be found, as the disc contains no extras at all.
This is a real shame, as the US release contains over 2.5 hours of documentaries and featurettes, as well as an audio commentary.

Paramount have seen fit to give the UK bugger all.

Packaging
This new release of Chinatown arrives in a very nice looking steelbook, along with a cardboard slipcase.

Using the original artwork, with minimal messing around, we get embossed and glossy title lettering, with a high quality satin-like finish over the whole thing.

Summary
Clearly I’m very late to the party here, but Chinatown is a great film.

A great cast, with a fantastic performance from Nicholson, who owns the screen with a sparkling presence.
The film’s been given a really nice looking transfer, but it’s a real shame that the copious extras from the US release haven’t been brought across.

Grumbles aside, we do at least get a very nice steelbook edition, with well-chosen, beautiful art, and topped off with a slipcase. 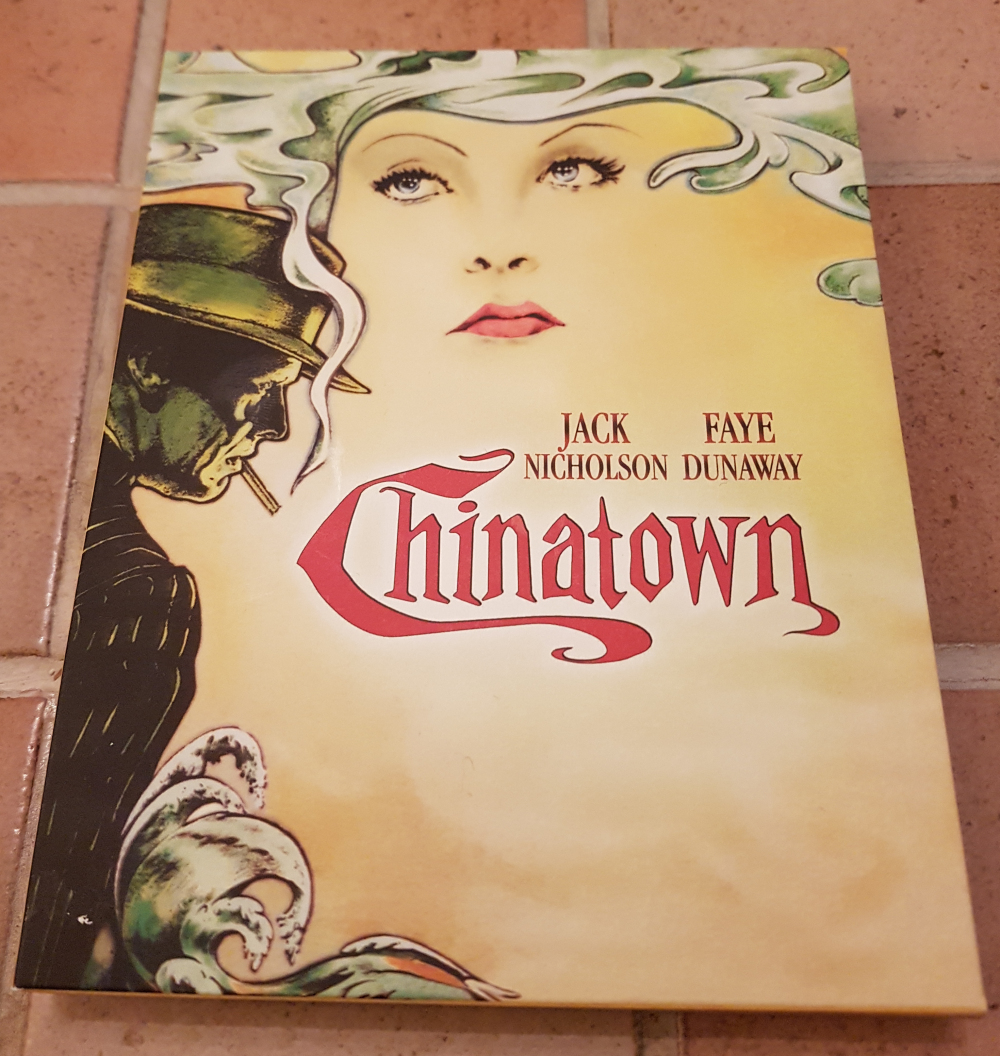 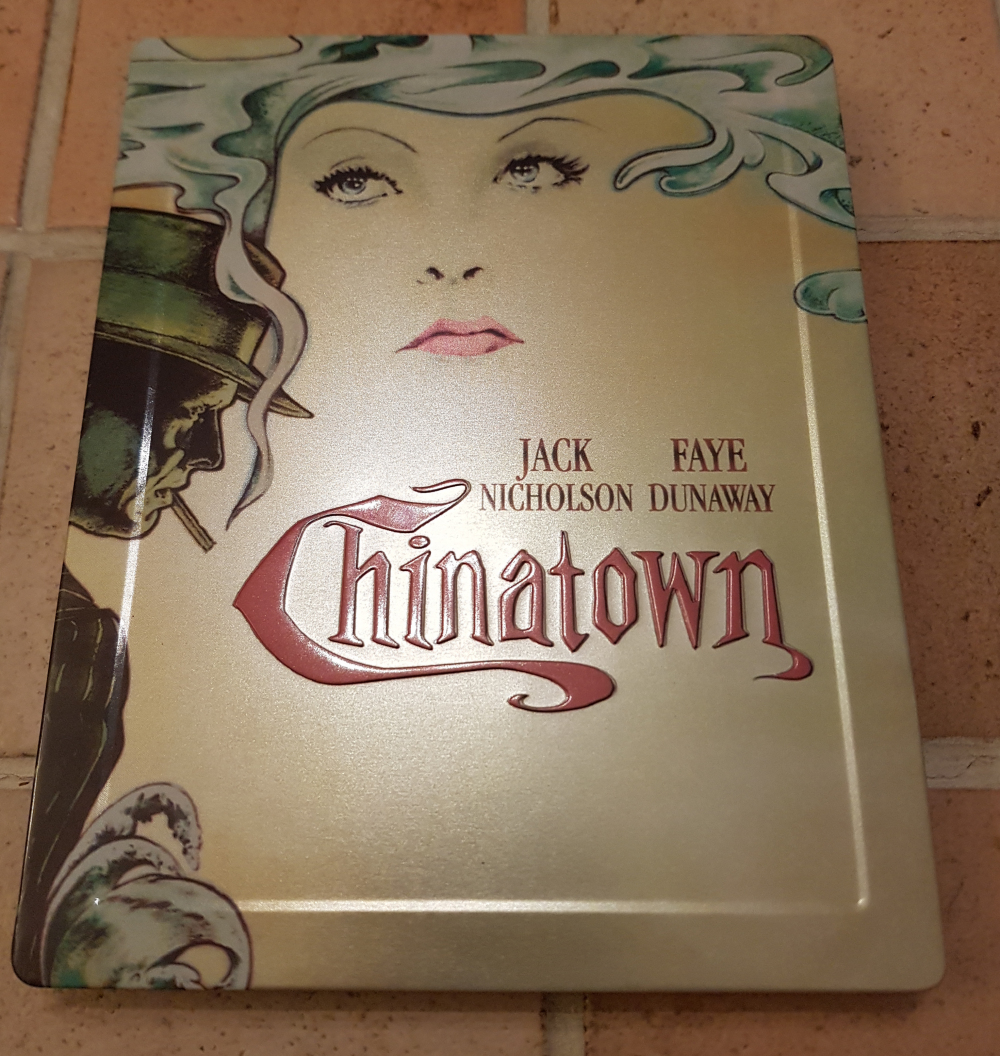 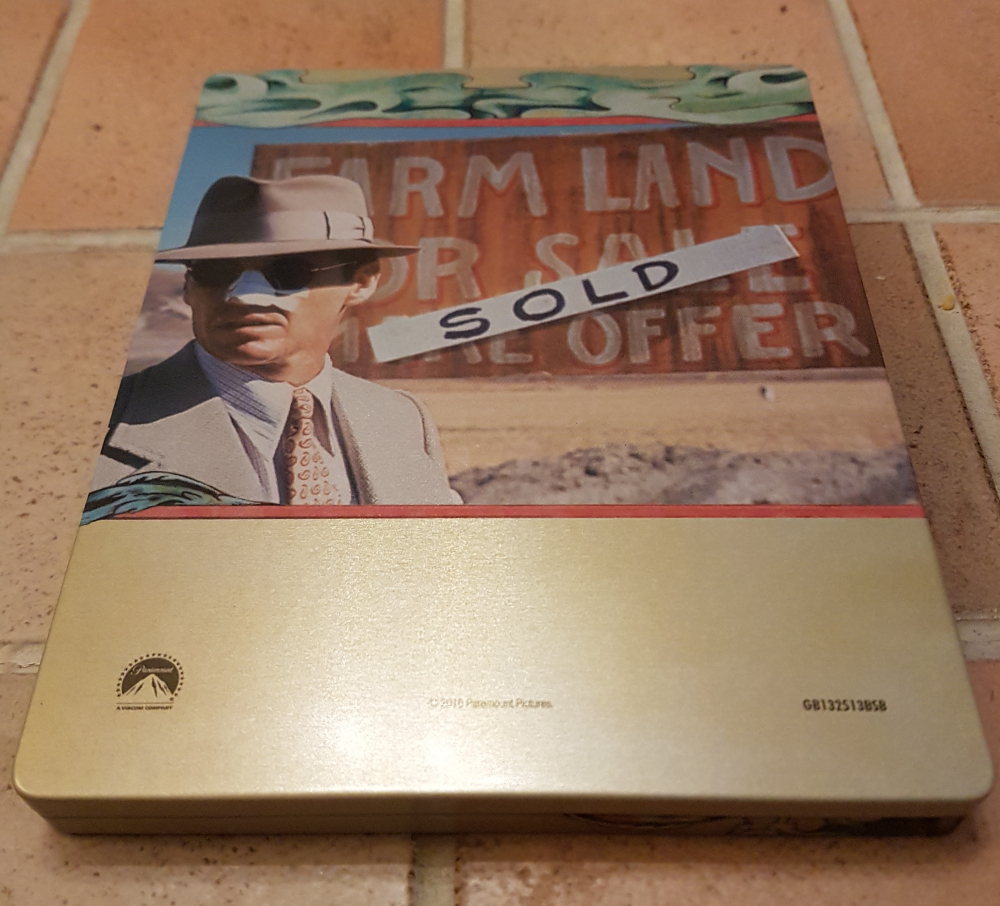