Film
When a film maker’s debut is as impressive as the fantastic Reservoir Dogs, expectations for a follow-up are extremely high. With the benefit of hindsight, it’s now obvious that Quentin Tarantino would blow those expectations out of the water, but back then, with just one directorial effort under his belt, plus scripts sales for True Romance and Natural Born Killers, he was still far from a safe bet.

There was no need to worry though, as Tarantino’s second film, Pulp Fiction, was a huge box office and critical hit, and cemented his place as one of the most talented and important American film makers of the modern era, something he has reminded us of with each of his subsequent films.

Expanding on the use of flashbacks in Reservoir Dogs, Pulp Fiction brings us a series of intertwined stories, covering three days in the lives of hitmen, a gangster and his wife, a washed-up boxer, liquor store thieves, and more, in a series of chapters that jump forward and backward in time. Despite the broken chronology, the film is never confusing, and thanks to Tarantino’s writing you’re just swept along for the ride.

Add to this a huge ensemble cast including Bruce Willis, Tim Roth, Amanda Plummer, Uma Thurman, Samuel L Jackson, Harvey Keitel, Ving Rhames, and John Travolta in a truly career re-defining role, all breathing life into Tarantino’s dialog, and Pulp Fiction was destined to be a classic from its day of release.

Nearly 30 years old, Pulp Fiction has been given a new lease of life on 4K, with a phenomenal transfer. As you’d expect there is a light amount of film grain, but it never distracts, while textures such as costumes and skin are packed with detail. HDR brings a real pop to the image, with a bold colour palette that is often punchy without ever looking unnatural, while details still standout despite the darkest shadows and brightest highlights.

If you’ve got the old Blu-ray of Pulp Fiction, this 4K release represents an essential upgrade.

Audio
It’s a shame there’s no Atmos soundtrack on this new release. Instead we get a 5.1 DTS-HD Master Audio track – but have no fear, it’s still aa great listening experience.

Dialog is clear – essential for any Tarantino film – and while the sound mix is generally geared towards the front channels, with a bit of LFE here and there, it really comes alive when the songs kick in, and does a much better job of filling out the soundfield. While a bit of Atmos-assisted height would have been nice, this is a still a very impressive mix.

Extras
There’s a good selection of extras included, mostly on the Blu-ray, which is the same disc and transfer as old release. We don’t get an audio commentary unfortunately (Tarantino doesn’t seem to be a fan of them, not having done one since the DVD release of Reservoir Dogs), but we do get over 4 hours of extras, including cast interviews, behind the scenes featurettes, critical reaction to the film, marketing materials, and an hour long interview with the man himself.

These are all sure to give you all the info you might otherwise get from a commentary track.

Packaging
As well as regular Amaray release, you can also pick up this new 4K release is a very nice looking steelbook release, which we’re looking at here.

While it may not be to everyone’s taste, I’m a real fan of this artwork, showing Vincent and Mia during the famous dance scene at Jack Rabbit Slim’s and the front, with a milkshake, Big Kahuna Burger and a pack of Red Apple smokes on the back.

There’s no embossing or debossing, while the colours are bright and bold, with a nice glossy finish.
Overall, this is a very nice looking steelbook, and a welcome addition to the growing Tarantino 4K collection. 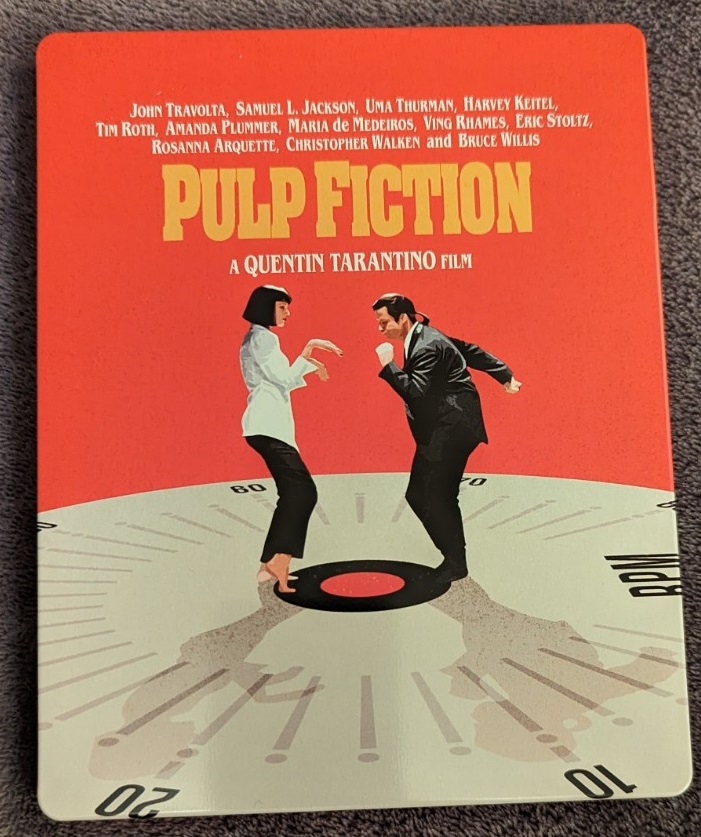 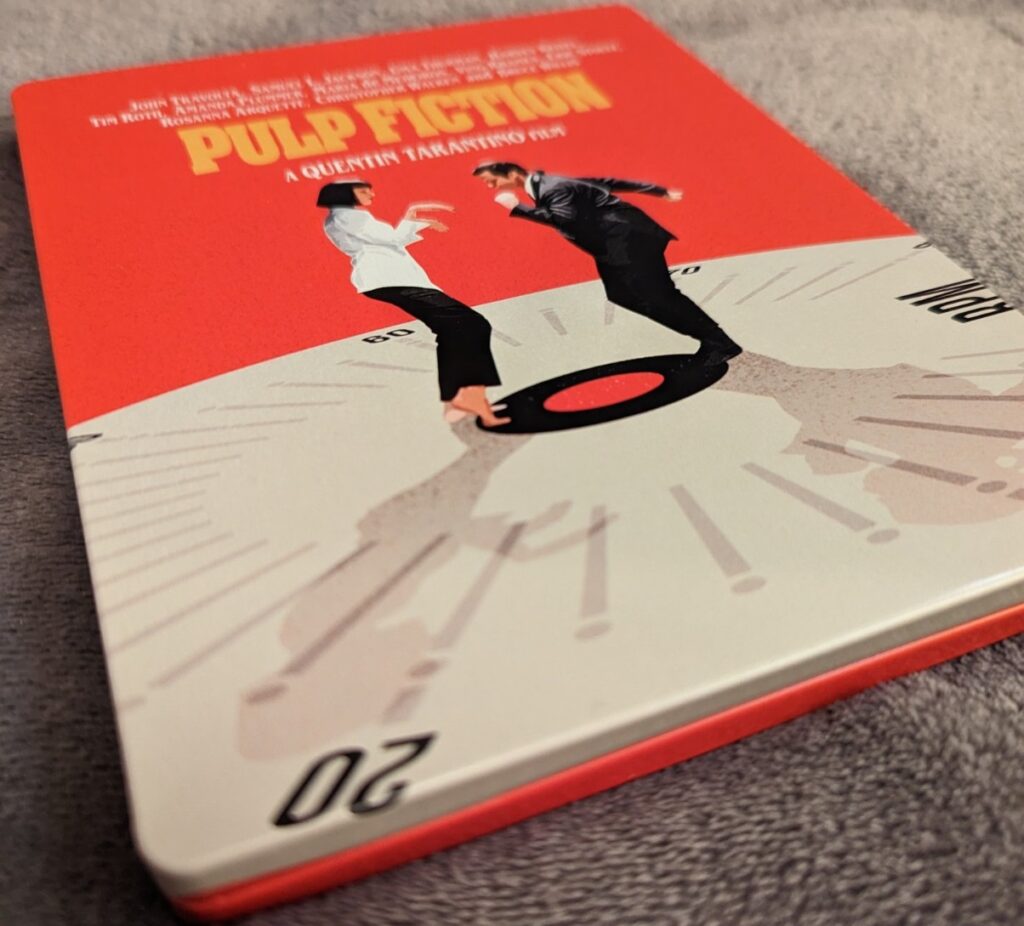 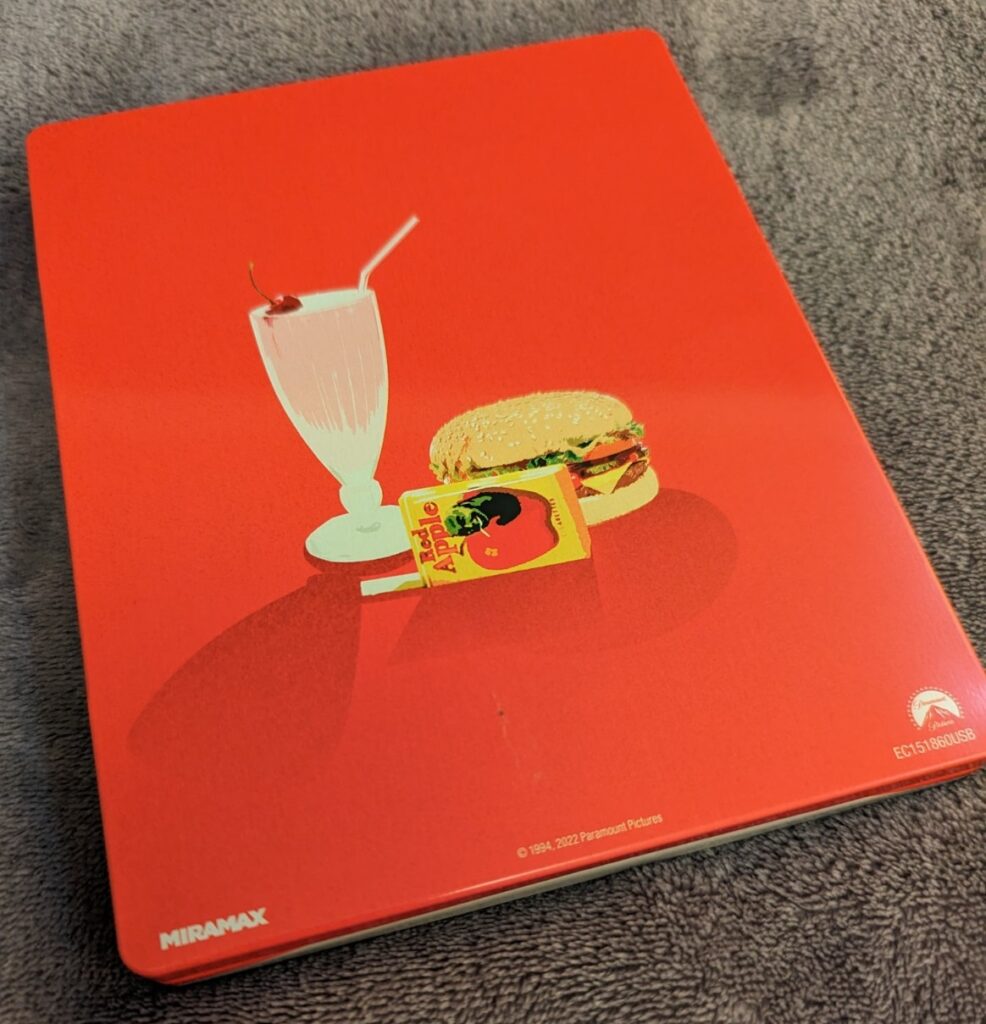 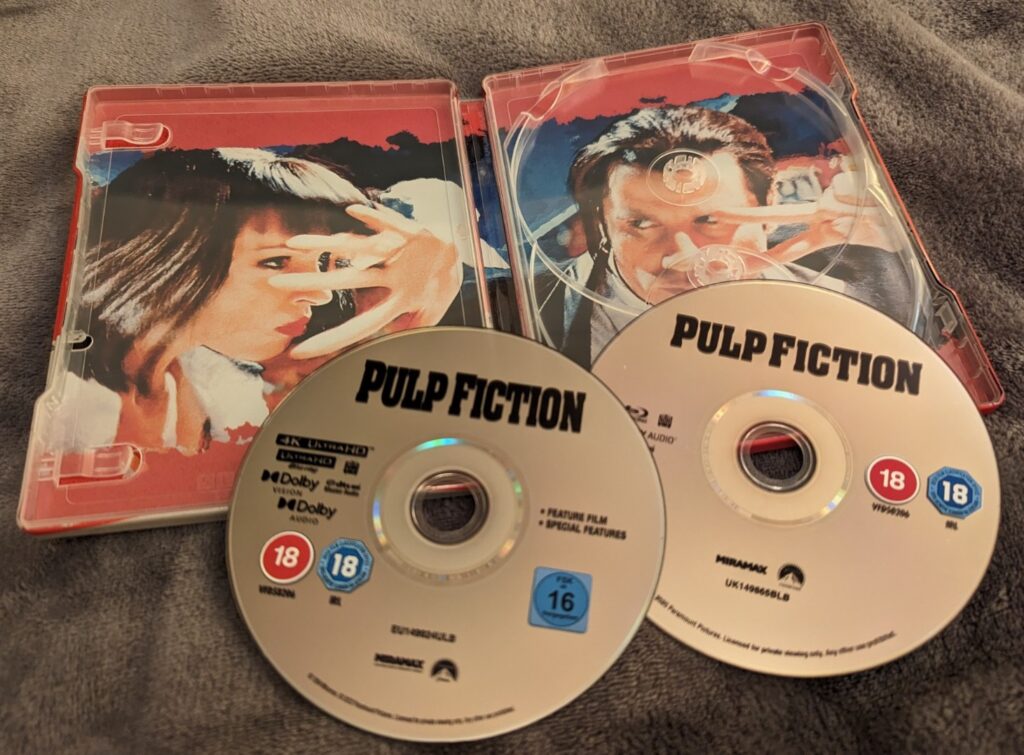