The latest Titans of Cult steelbook release leaves behind the action/adventure and sci-fi genre of their previous releases, to bring us the classic mob movie Goodfellas.

The folks at WB Shop UK were kind enough to provide a copy for us to look at, and you can order yours right now from WB Store, where new customers can get 10% off their first orders.

Film
Based on a true life story, Goodfellas follows Henry Hill, who works his way up from being a teenage errand boy for the Brooklyn mob, to becoming a leading figure in organized crime in New York.

As Henry (played by Ray Liotta, in a role that’s still a career best) narrates, we see him slowly but surely prove himself and gain the trust of the local mob boss Paulie (Paul Sorvino), and the various members of his crime outfit, including Jimmy (Robert De Niro) and the volatile Tommy (Joe Pesci), while also juggling a home life with wife Karen (Lorraine Bracco) and their children.

Eventually, of course, an inevitable excess of hubris leads to Henry’s downfall, and he’s left with no choice but to betray all that hard-earned trust in order to save his own life.

While I’ve already said that Liotta’s performance here is still his best, all of the lead actors are on absolutely top form. De Niro, of course, commands the screen effortlessly, while Pesci is by turns funny (funny? Funny how?), charming and terrifying. Paul Sorvino can project an air of absolute ‘do not fuck with me’ authority without saying a single word, while Bracco, in the kind of role that is often under-written, shines here, and more than holds her own.

When it comes to classic gangster movies, there are basically two that always top the list – The Godfather (ok, maybe The Godfather Part 2), and Goodfellas.

Of the two though, Goodfellas is easily the most easily re-watchable – one of those films you might come across channel hopping, and before you know it you’ve been watching for an hour or more, as it just effortlessly sucks you in.
For a film that’s now 30 years old, Goodfellas doesn’t feel like it’s aged in any way. Its period setting helps avoid any late 80s fashions that may date the production, which definitely helps, but the central performances, Scorsese’s staging, the brilliant soundtrack and Thelma Schoonmaker’s masterful editing still give the film an energy and freshness that has rarely been matched.

Video
This new release gives you the movie in 4K, with a transfer taken from a 4K scan of the camera negative, and spruced up with a dash of HDR. The transfer here is not groundbreaking by any means, but is still a decent upgrade over the Blu-ray.

There’s a fair amount of grain, thought it’s never distracting, and gives the image a natural, ‘filmic’ look, while detail levels are improved quite a bit – you can easily pick out plenty of details in all those perfectly tailored suites, for example. The HDR is subtle but does improve black levels slightly, with a decent amount of shadow detail visible, while highlights pop out nicely.

Some may be disappointed that this isn’t a pristine, pin-sharp presentation, but, as a transfer of an older film, that was shot on celluloid, it’s certainly an accurate one.

The set also includes the movie on Blu-ray, which is based on the same 4K scan.

Audio
The soundtrack is a nicely done DTS-HD 5.1 affair, which is mainly focused on the front channels, ensuring that dialog is nice and clear.

In terms of multi-channel action, atmospheric and background audio from locations like restaurants and diners comes across well, putting you right into the scene, while the brilliant selection of songs that play throughout the film fill out the soundstage.

Explicit direction effects are used sparingly but effectively, as are low frequency effects, which come into play adding a bit of grunt to explosions and gun shots.

As with the image, look elsewhere if you want some demo material show off your home cinema, but if you want a faithful presentation of a primarily dialog-driven movie, you’ve got it here.

Extras
This release contains a decent selection of extras, starting with a pair of audio commentaries on the 4K and Blu-ray discs. The first one edits together a series of interviews with the director and some of the cast and crew, while the second features Henry Hill and former FBI agent Edward McDonald.

The first track is a little dry, though informative, but the Hill/McDonald track is much more interesting, and is filled with fascinating details from the two men closest to the real events presented in the film.

The dedicated bonus Blu-ray disc, carried over from the 2015’s 25th Anniversary release, includes a good selection of documentaries, totaling over 3 hours.

The biggest piece here is “Public Enemies”, a fascinating 1hr 45m documentary which explores the history of gangster movies from the days of early silent cinema, with plenty of clips and interviews with a huge range of participants.

“Scorsese’s Goodfellas” and “Getting Made”, each running about 30 minutes, utilise new and archive interviews respectively, to look back at the making of the film. Other featurettes include contributions from other film makers talking about their love of the film and the influences it had on their work, a look at how accurately the film portrays the life of a gangster, and a comparison of script notes to final scenes in the film. Rounding out the disc is are 4 gangster-themed classic Warner Bros animated shorts.

Packaging
As always with Titans of Cult, the main draw here is the packaging. So, what have the ToC gang come up with this time?

Obviously the star of the show is the new and exclusive artwork and once again it suits the title perfectly. There’s no embossing or debossing this time round, but the shirt and tie parts of the artwork catch the light nicely. Compared to previous Titans of Cult releases, it’s certainly not the most arresting artwork we’ve seen, but it’s classily understated, and certainly fits with the film’s style.

Next up is the usual pin badge that we get with all these releases. This time it’s the logo for the Copacabana club seen in the film. The badge seems a little bit smaller that the previous ones, but it’s very nicely detailed, and feels nice and solid.

Previous Titans of Cult releases have included posters, drinks coasters, and even a second, mini Steelbook, but this time round we something very different – Mama Scorsese’s meat sauce and meatball recipe, which really couldn’t be more on-brand.

All of this is once again housed in a transparent plastic case, which is printed with complementary artwork.

Summary
As a film, Goodfellas is an undoubted classic, and certainly one of Scorsese’s best (my personal favourite is Casino, but it’s a VERY close call). With a great script, superb performances, expertly selected soundtrack, and a timeless visual style, it’s a must see.

As a Titans of Cult release, the film marks a huge – but nonetheless welcome – shift away from the type of genre movies that have been released by the label so far.

While ToC are going back to that particular well with their next release, the dystopian thriller V for Vendetta, here’s hoping that they continue to widen their scope in the future. 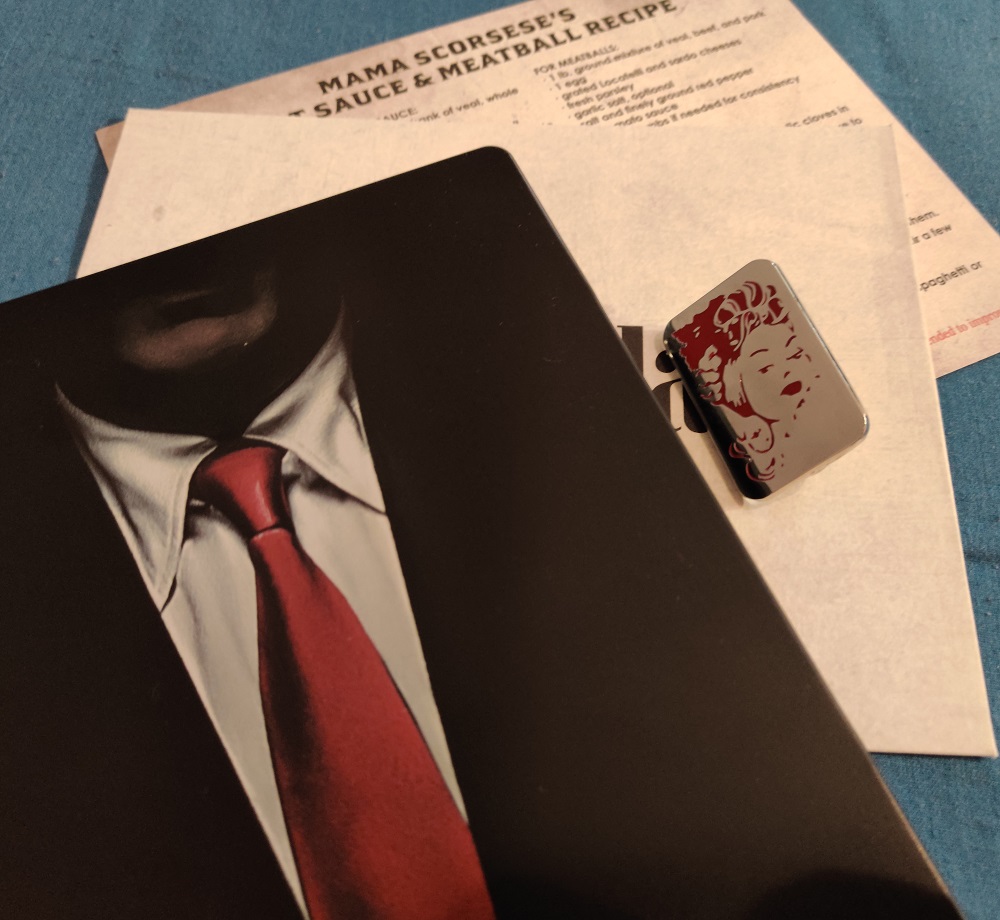 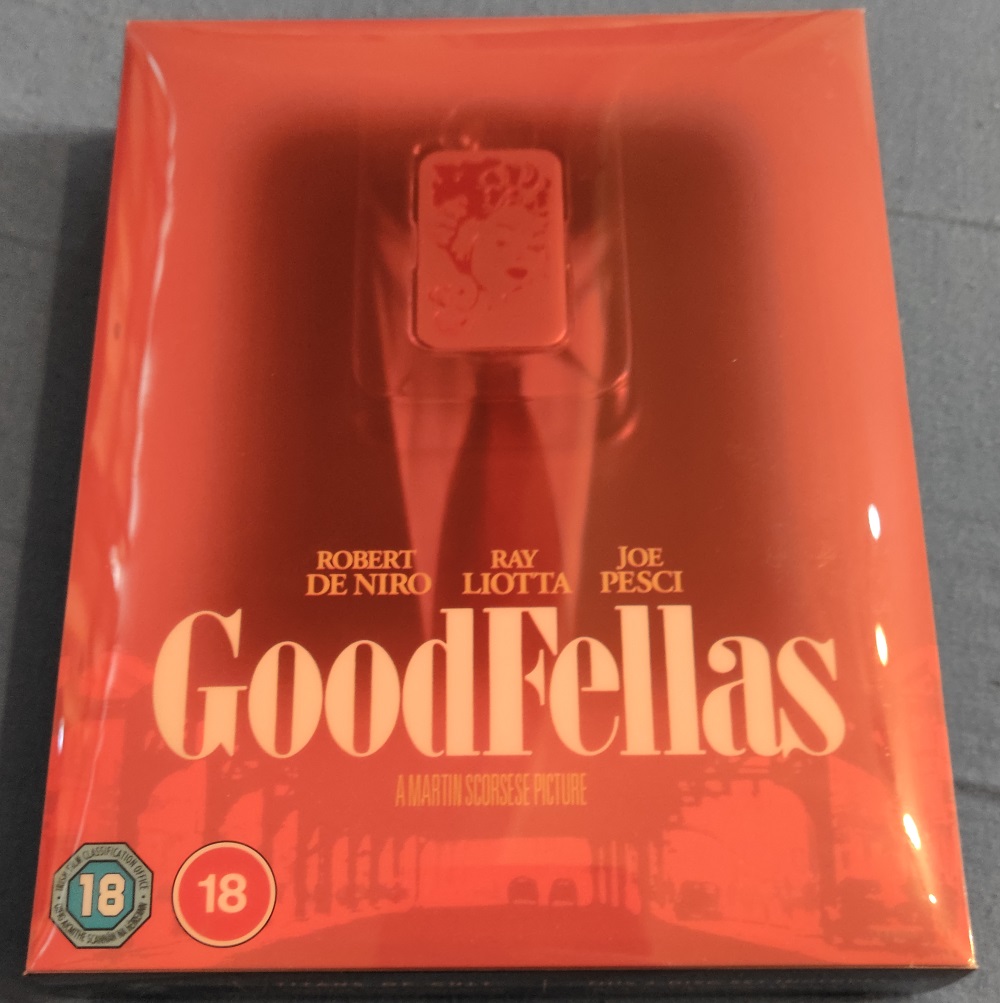 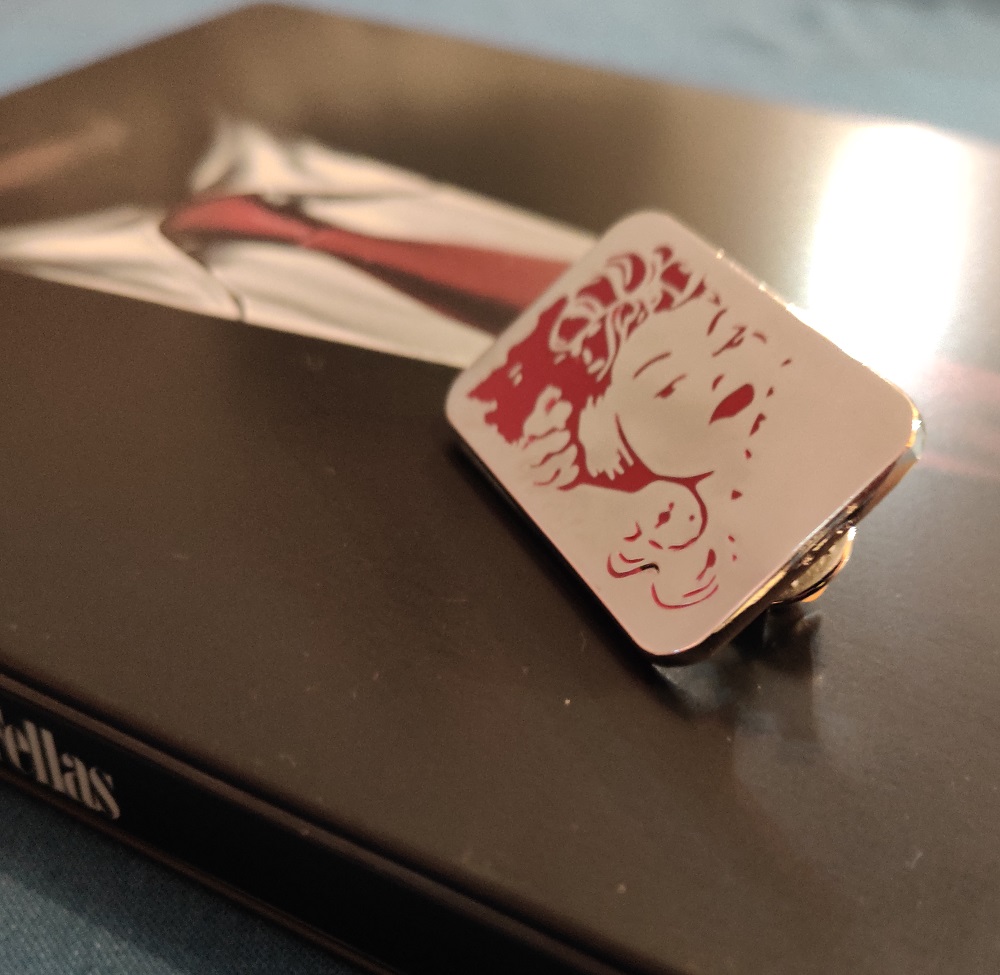