We’ve had a great response to our Meet The Collectors series so far, with lots of you getting in touch wanting to share your own stories. Due to the resulting backlog, we’re going to squeeze in one more this week, then the plan is to go to 1-2 per week.

I have about 400 steelbooks in my Blu-ray collection and a few 3ds ones and other console ones (I also collect 3ds games, consoles and Nintendo amiibo).

I’m getting a few of the Mondo ones (difficult over here in the UK) and often travel to Germany where they have loads but I don’t like any with non-English in the actual steel – just a choice….

I’m hoping Zavvi finish the Classic Disney collection as they are a great series – also like a series – Bond , Disney , Pop Art etc and glad that TV series are now getting steelie treatment with Breakjng Bad , GoT etc

All the time!! I hate it when lazy steelies come out with generic art – the best are stylised and different – the Mondo steelbooks and Pop Art series for example – also Rush, GotG, even little known films like The Voices … I have two steelbooks for The Wolverine – which isn’t great a movie but just has had two releases!!

Yes definitely as it goes both ways – I used to have rules that I’d only buy a steelbook if it’s a film I love , the art is great or it’s a film I’ve never seen – but now I just buy them all!!!!

Assuming I’ve not found them yet I think Exorcist or Blair Witch Project – there is great scope to create an awesome version of both of these… I’m looking to get some blank steelbooks and start creating my own – I’m just not very creative!!

On display in my front room :0)

Most people are quietly impressed I think but think I’m a bit crazy – along with my Nintendo collection they just think I’m a big geek- which I guess I am ;0) 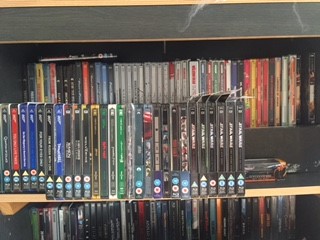 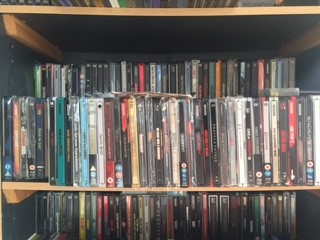 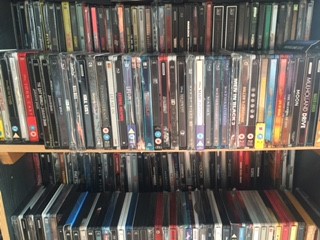 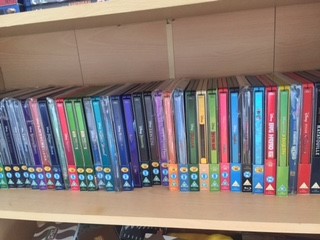