Film
Revenge opens like countless other exploitation flicks – Jen (Matilda Lutz) a young, blonde bombshell and her married boyfriend Richard (Kevin Janssens) are heading to his expensive pad in the middle of no-where, for a nice little romantic getaway. Soon after they arrive though, it’s clear Richard has other plans, as his two friends Stan (Vincent Colombe) and Dimitri (Guillaume Bouchede) arrive for a boys’ hunting weekend.

Stan and Dimitri’s eyes are all over Jen, and while it makes her uncomfortable, she’s safe in the knowledge that Richard is there to protect her from any unwelcome advances. However, after a night of drunken partying, the next day things inevitably go downhill very quickly and very badly.

With Richard out of the house, Stan takes his chance, and rapes Jen. And to make matters worse, when Richard returns, rather than be the protector that Jen needs, he takes his friends’ sides. Jen flees, but reaches a dead end on a cliff top, with nowhere to run. A panicking Richard pushes her off, to her certain death. Unfortunately for them, against the odds Jen survives, and very soon, well, it’s rare that a movie’s title has been so apt.

The performances from the small cast are excellent. The trio of males soon drop their macho pretentions as their plans quickly unravel and the panic sets in, while Lutz is fantastic as Jen, who manages to convince as both a ‘helpless female’ and a singularly focused, primal force of nature.

While comparisons to movies like I Spit On Your Grave, Kill Bill, Baise Moi, and Ms 45 are inevitable, Revenge manages to keep things fresh. Thanks to a tight script and very assured direction by Coralie Fargeat, here making her feature film debut, the film flies along, barely pausing for breath.

To be clear, there’s nothing really new or groundbreaking here, but Fargeat manages to avoid some of the tropes of the genre – unlike in some previous movies, for example, that seem to revel in the violence of the attack on the female character, the rape itself is barely shown.

Similarly, when Jen sets out to settle the score, she isn’t suddenly transformed into a Jason Bourne-style super-assassin. Her kills are amateur, difficult, and VERY messy.

Visually the film is often striking, moving from the garish, thanks to the candy-coloured window covers at Richard’s house, to the parched, bone dry sun bleached desert landscapes, to almost pitch black night sequences. There are moments of near Lynchian surreality, that at times gives the film an almost fever dream quality – quite apt when you take into account Jen’s peyote-fueled self-surgery.

Revenge is a very welcome addition to a frankly tired genre, and Fargeat manages to bring a fresh, female perspective through her writing and directing, but this is undoubtedly Lutz’s movie. In a script that’s very light on dialogue, her often silent portrayal of Jen’s transformation and subsequent rampage utterly captivating.

Video
Revenge previously came to Blu-ray in 2018, and this new edition appears to be based on the same transfer. That’s not a bad thing though, because it’s very good indeed.

Cinematographer Robrecht Heyvaert’s images are by turns seductive, stark, surreal, sun-bleached, and brutal, and the transfer shows them all off to great effect.

Scenes set out in the sun-baked desert really do look scorching hot, while those set at night, and lit only by torches or vehicle lights, are handled very well, with bright highlights and inky blacks on screen at the same time.

Overall, this is a superb video presentation.

Dialog is crystal clear at all times, with some subtle atmospherics, and limited but effective use of explicitly directional effects. Sound effects like gunshots and impacts have a nice weight to them without being over the top.

But it’s Robrecht ‘Rob’ Heyvaert’s driving electronic score that takes centre stage, taking full advantage of the 5.1 DTS-HD MA audio on offer. Pulsating bass adds to the unnerving atmosphere, while the ‘instruments’ are spread out around the channels, often filling the room with a wall of sound that is effectively unsettling. Evoking the best of John Carpenter’s work, while often edging towards full-on EDM, this is a superb score from a musician I was previously unaware of. Brilliant stuff.

As previously noted, Revenge has had a UK Blu-ray release already, though that was a bare-bones affair. Thankfully, Second Sight have more than made up for that with their new edition.

First up is an audio commentary from Kat Ellinger, the author and editor of Diabolique magazine. This is without doubt the highlight of the extra features. Ellinger really knows her stuff, and, while talking us through the events of the film as they unfold, interweaves information on the film’s production, themes, influences, and more. This is essential listening, and you’ll come out of it with a better understanding of the film and the genre, and no doubt the names of a few more movies added to you ‘to watch’ list.

Next up is ‘Out For Blood’, a new interview with director Coralie Fargeat and star Matilda Lutz. Running over 40 minutes, this is a great piece, which goes into plenty of detail on how Lutz came to be cast, how the pair work together, the director’s influences from previous revenge movies, the challenging subject matter, and lots more.

Then we get ‘The Coward’, an interview with actor Guillaume Bouchede. This one runs for about 14 minutes, and is a great insight into how the actor approached his character – while undoubtedly a bad guy, it’s clear he wanted to avoid just being a stereotype thug, and tried to bring a bit more depth to his performance.

‘Fairy Tale Violence’ is an interview with cinematographer Robrecht ‘Rob’ Heyvaert, running approx. 24 minutes. We get plenty of info here, including Heyvaert’s influences, the decision to go with an often quite surreal visual style, and the challenges of shooting on location in Morocco.

Composer Robin Coudert rounds out the interviews, with a chat lasting 24 minutes that covers his career. He’s candid about his early (lack of) success, before moving on to his more recent work, as well as his film score influences, and work on Revenge in particular. As with all the interviews, it’s interesting and well worth a watch.

Also included in the package are a slipcase with new artwork by Adam Stothard, a poster with the new artwork, and book with new writing by Mary Beth McAndrews and Elena Lazic. These weren’t included with our review disc unfortunately, so we haven’t given them a once-over, but any in-box goodies are always welcome and worth having.

Revenge is a hell of a calling card for a first time feature director, as Coralie Fargeat twists and inverts many of the clichés of the genre, and I can’t wait to see what she brings us next.
Second Sight have done a great job with this release, with a superb video and audio presentation, along with a great selection of new extras that really provide an insight into the film and its place in the genre.

Movie: B+
Video: A-
Audio: A-
Extras: A-
Overall: A- Strongly Recommended

Revenge is available to buy right now from Amazon UK. 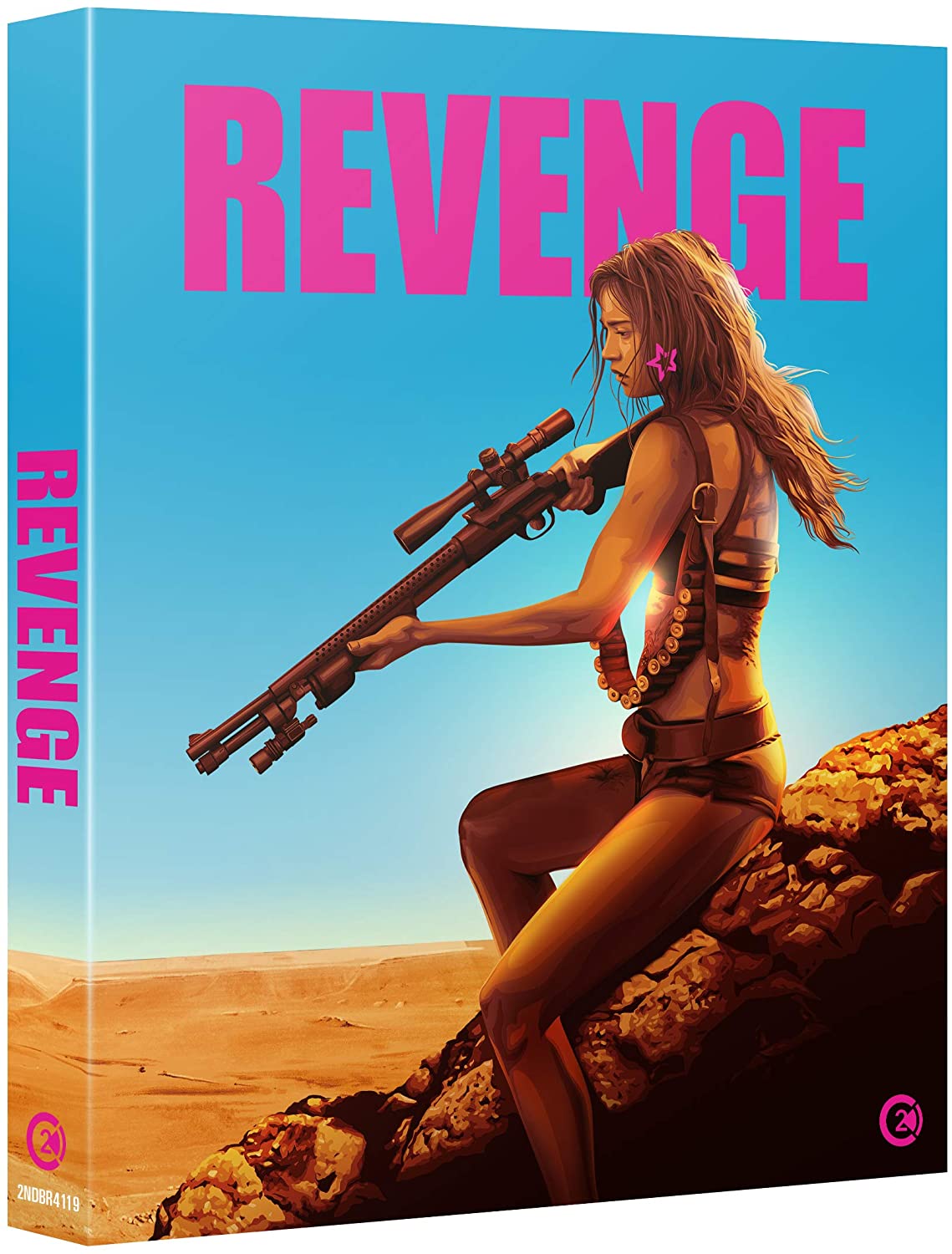