We review Arrow’s new release of “The Voices”

Jerry (Ryan Reynolds) is an affable singleton who works on the factory floor at a bathtub factory, ever eager to get along with his co-workers, especially Fiona (Gemma Arterton) and Lisa (Anna Kendrick) from accounts. After work Jerry goes home to his pet cat, Mr. Whiskers, and loyal dog Bosco, where the three of them hang out, watch TV and discuss the day’s events. When one night he accidentally kills Fiona, Jerry hastily covers his tracks, under the strict advice of the subversive Mr. Whiskers. But Jerry is already beyond the reach of his well-meaning psychiatrist Dr. Warren (Jacki Weaver) and things are also looking bad for Lisa, who has taken a shine to Jerry. Despite Bosco trying to keep Jerry on the straight and narrow, Mr. Whiskers seems to be the loudest voice in Jerry’s head and soon events have spiraled and salvation is all Jerry can hope for.

I don’t know about you, but I’ve not really seen much of Ryan Reynold’s work. Nothing against him, and I am looking forward to seeing his personal passion project, the Deadpool adapaptation, next year, but my awareness of him mainly comes from questionable romantic comedies, and even more questionable comic book adaptations (Green Lantern & X-Men Origins: Wolverine, where he first played a much-altered version of Deadpool. At least someone’s giving him the chance to do it right this time).

So, while I’d heard good things about The Voices prior to sitting down to watch this release from Arrow, I was dubious as to whether Reynolds could pull off the kind of multi-layered performance needed to play Jerry. Well I’m happy to report that, for me at least, his performance here is a real revelation.

Starting off the movie, we see Jerry as a shy, socially awkward guy, trying his best to integrate back into society after a traumatic event in his past. Unfortunately, Jerry’s not been following his psychiatrist’s advice to keep taking his medication, and soon the mental cracks appear as he struggles to keep it together and the voices in his head get ever more intrusive. All the while Reynolds still manages to keep Jerry a sympathetic character, having very little concious control over events.

There are some fine performances from the supporting supporting cast, especially Gemma Arterton as Fiona, the subject of Jerry’s affection. She’s at her best when speaking via Jerry’s psychosis, as her dialog and demeanor are filtered through his idea of a chirpy British chum. Pitch Perfect’s Anna Kendrick is also likeable as always, as another colleague who gets caught up in the mayhem.

The movie handles the shift in tone pretty well, starting out like a wry, sideways look at small town characters in the style of David Lynch or the Cohen brothers, before heading for, if not outright horror, then certainly darker, though always funny, territory.

The script does threaten cliche in the third act as Jerry’s world begins to crumble around him, but pulls it back at the last minute for an ending that takes an truly unexpected turn as the credits roll.

Overall, The Voices is a great movie, and well worth a watch for all fans of the dark and quirky.

Arrow are of course renowned for the care and attention they lavish on their releases, with painstaking restorations breathing new life into the classic and not so classic cult movies of the past.

As a new movie, I suspect Arrow’s job was much easier this time round with The Voices, which arrives on Blu-ray with a very nice looking transfer.

The stylised production design comes across really well, with the bold colour pallette being reproduced really well. There’s plenty of detail on show, and a nice, natural look to the image.

The soundtrack isn’t going to win any awards in the demo stakes, but it’s very effective and nicely presented on this disc. Good use of atmospheric effects add to an overall sense of unease. The rear channels and LFE kick in with a bit more punch now and then to remind you that they’re still there, while dialog is nice and clear.

Again, Arrow are known for for their indepth extra features that accompany their classic releases. There’s not quite that usual depth of nostalgia here, obviously, but there’s still plenty to check out.

A selection of interviews lasting just over 20 minutes see the cast, director, screenwriter and producers discuss characters, story development, direction and so on.

Deleted and extended scenes total just over 15 minutes, and, while it’s always interesting to see the editorial choices made during the completion of a movie, not of these are screaming to be restored.

A 4 minute or so section looks at the recording of the voices of Jerry’s dog Bosco, and cat Mr Whiskers, which he also voices. While Bosco is supportive to the end, Mr Whickers is, frankly, a twat, and it’s interesting to see Reynolds develop their voices.

Next up, there’s about 10 minutes of behind the scenes on-set footage, followed by almost 30 minutes of animatics, comprising a mix of CGI and hand drawn images.

The weakest of the bunch is a ‘scare prank’, which is hidden camera footage of a promotional gimmick from the film’s theatrical release where a fridge was placed in cinema foyers with invitations for unsuspecting passers by to reach inside for a drink. Hilarity ensues… Thankfully it’s brief.

The Voices is available as either a standard Blu-ray release or in a limited edition steelbook release that must rank as one of the finest looking for the year, and is available in the UK exclusively from Zavvi.

The movie is great fun, and should prove a pleasant surprise for those who, like me, were unconvinced of Ryan Reynolds acting abilities. The technical presentation is very good indeed, as to be expected from a new movie, while the steelbook packaging is superb.

My feeling is that in terms of extras there is nothing produced in-house at Arrow, and it shows – these are far more like the standard EPK pieces found on many big studio releases, and a world away from what the company would normally produce. That said, they’re good for what they are, and you certainly won’t feel short changed. Mind you, I’m a sucker for a good audio commentary, and it’s a shame not to have one here… 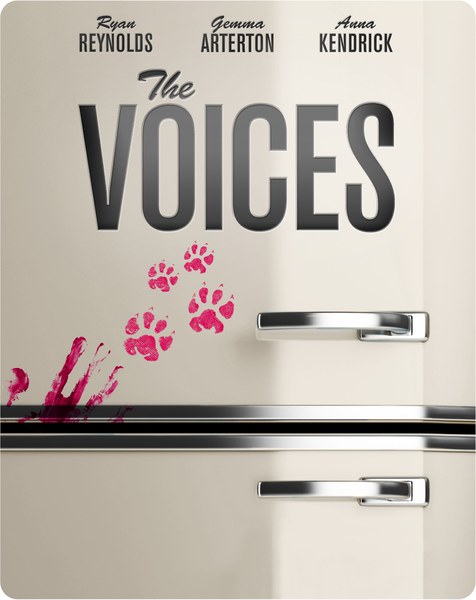 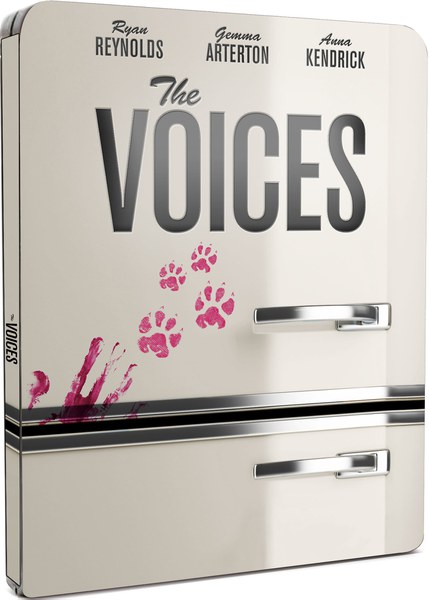 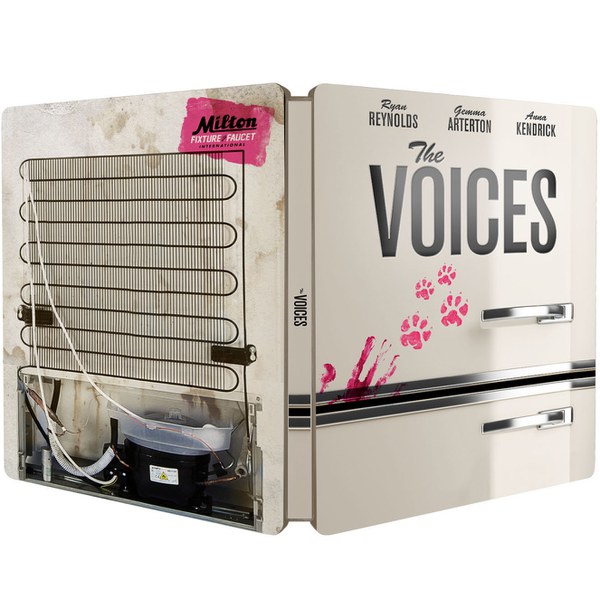 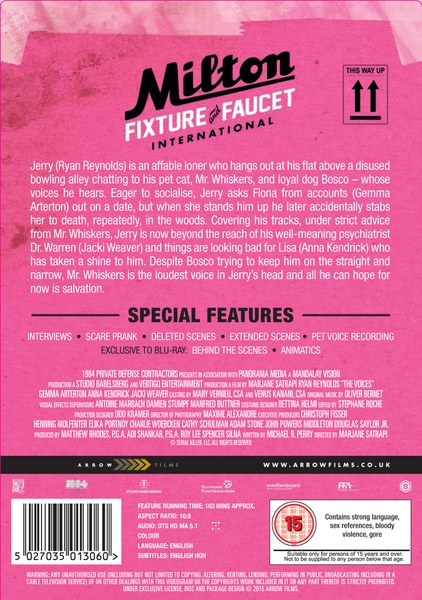