Film
Host takes us back to the depths of 2020’s first lockdown, as group of friends gather for a Zoom party with a difference, as they are joined by a medium, who has been invited to perform a séance.

Makes a change from quiz night.

Naturally not everyone takes it seriously enough, and over the course of the following hour, one by one the gang face the wrath of a VERY upset spirit, while those left online can only watch in growing horror.

So far, so so-so, right? Supernatural horror movies are obviously nothing new, and we’ve seen the internet-based evolution of found-footage movies before, with the likes of Unfriended and Searching, but Host really is something special, for several reasons.

First, the cast is incredible. There’s genuine chemistry here between these real-life friends, with easy banter and chat, and utterly convincing performances. You really do feel like you’re looking in on a real Zoom call.

The concept is simple, but the script, by director Rob Savage and co-writers Jed Shepherd and Gemma Hurley is lean and sharp, cramming in a huge amount into its brief running time. The dialog is natural, while the set pieces are very well placed to keep the viewer on the edge of their seat all the way through.

The features of Zoom itself, such as filters and background video loops, are casually established early on, before later being exploited to full effect, playing into and ramping up the tension brilliantly.

The story of the production itself is worthy of praise – from concept to release, Host was made in about 12 weeks. With help from housemates/family or, occasionally a very small, socially distanced effects crew, each cast member filmed their own footage. They were also kept in suspense for much of the filming, as, for many scenes, they hadn’t been given a script, ensuring that their reactions to what they were seeing were genuine. I could go on forever about how impressive Host is as a film-making achievement, but you shouldn’t just take my word for it.

Video
The video presentation is far from demo material, but is totally in keeping with the capabilities and limitations of the filming methods and technology used, so it would be unfair to be too harsh.

Depending on which character we’re watching, images quality varies. As well as occasional moments of pixilation and blocking, we also get big fluctuations in clarity and sharpness, as well as colour saturation and contrast.

None of the that should be taken as a negative – all the above add to the mood, and help sell the whole setup, pulling the viewer in. It would be far more distracting to have a pristine, pin sharp 4K transfer.

Audio
On the audio side, the story is essentially the same. A simple stereo soundtrack does the job perfectly well. There’s no music score to worry about, so the focus here is on dialog, and it’s clear throughout. Even in moments where characters talk over and interrupt each other, or the screaming starts, it’s easy to keep track of what’s being said.

Sure, there are some moments where a multi-channel surround sound extravaganza could provide a few jumps in and of itself, the film is more than tense enough without it, and again the presentation we get is far more accurate

Extras
Host’s short running time is more than compensated for by the great selection of extra features included on this release.

First up are a pair of audio commentaries, one featuring co-writer/director Rob Savage and producer Douglas Cox, the other with cast members Haley Bishop, Jemma Moore, Emma Louise Webb, Radina Drandova, Caroline Webb, and Edward Linard. Both offer a real insight into some of the technical and logistical challenges of making the film, and the camaraderie really shines through.

Next up we get a cast interview running about 30 mins. This covers some of the same ground as the cast commentary, but it’s still an interesting piece, and well worth a watch.

The 35 minute ‘making of’ documentary is next, and is really good. There’s more discussion about the genesis of the film, and some great behind the scenes footage showing just how some of the creepiest moments in the film were created. While there are some moments of very impressive digital FX, much of it is refreshingly – and often ingeniously – low tech, and very well done given the limitations of filming.

Next is an excellent BFI Q&A, featuring Rob Savage, his co-writers Jed Shepherd and Gemma Hurley, producer Douglas Cox, editor Brenna Rangott, and actors Haley Bishop & Caroline Ward, and moderated by film journalist Anna Bogutskaya. Running for over an hour, this is another great look at the work that went into the making of the film, and Bogutskaya does a tremendous job of giving everyone a chance to say their piece.

Savage, Hurley and Shephard teamed up again to join an episode of Mike Muncer’s excellent “Evolution of Horror” podcast back in 2020, and you can watch the Youtube version in all its glory. Muncer is a great host, and again does a great job of getting some interesting anecdotes from the trio for just over 30 mins. The whole series is an essential listen/watch for horror fans, so do check it out.

Next up, as part of their story and character preparation, the cast and crew took part in a real séance via Zoom, which you can also see here, and it’s interesting to see how some of the genuine reactions and comments here were integrated into the script.

We also get to see Rob Savage’s much-discussed original short Zoom prank video which led to the production of host, as well a recording of his earlier test run version.

Finally, we get a couple of Savage’s short films – “Dawn of The Deaf”, and “Salt” – both of which have concepts that I’d love to see expanded to feature length.

Packaging
Second Sight have once again gone the extra mile when it comes to the packaging of this release. While it’s not a Steelbook, the Blu-ray case is housed in a very sturdy rigid slipcase, alongside a booklet featuring the original story outline and new essays by Ella Kemp and Rich Johnson. Also included are 6 collectors’ art cards (with an exclusive 7th card included when you order direct from Second Sight.

Summary
I LOVE this film. The best horror movie of 2020, Host takes a simple idea and manages to avoid the ‘seen it all before’ pitfalls and cliches to deliver real tension, ingeniously staged effects set-pieces, and what must be the most natural, believable ensemble casts we’ve seen on screen.

Second Sight once again deliver an excellent limited edition package. The authentic video and audio presentation is backed up by a treasure trove of bonus material, that covers every aspect of the production without too much repetition.
Add in the included booklet and usual high quality packaging, and you’ve got an essential purchase. 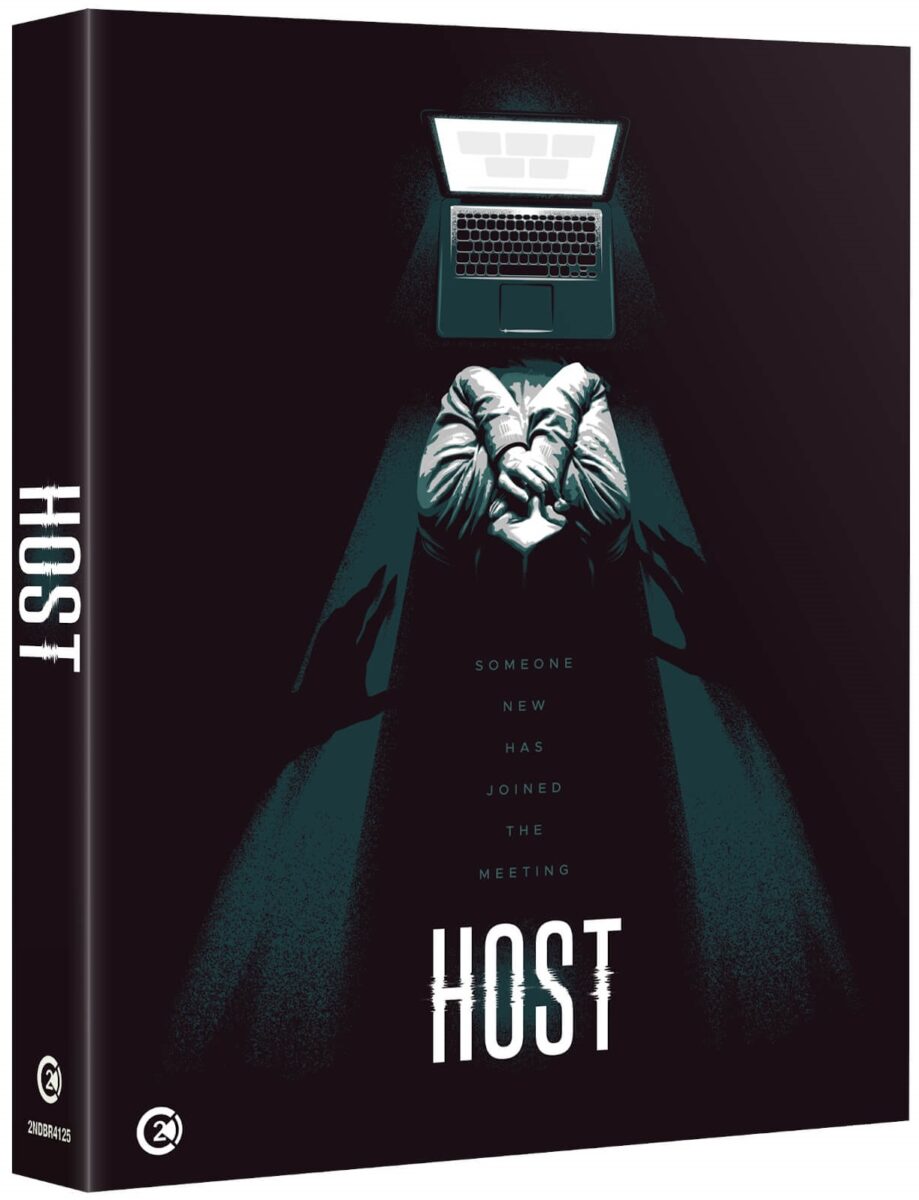