Film
When the chance to earn some much-needed money comes up, Gordon Fleming (Peter Mullan), the owner of an asbestos removal company, promises his small team will complete their latest job at the abandoned Danvers State Mental Hospital in just a week.

With the pressure on, the group get to work, but as they clear out the long-deserted building it’s clear that not all is as it seems, and it’s long before the cracks begin to show. While Gordon clashes with right hand man Phil (David Caruso) over the unrealistic schedule, team member Hank (Josh Lucas) happens to be Phil’s ex wife, causing more tensions before disappearing and failing to turn up to work as the week goes on.

Meanwhile, Mike (Stephen Gevedon, who also co-wrote the film with director Brad Anderson) skips most of the work to listen to old recordings that he finds of therapy sessions with one of the institute’s more infamous patients, and new guy Jeff (Brendan Sexton III) finds himself on the receiving end of the usual wind-ups and practical jokes.

It’s hardly spoiler territory to say that things soon take a dark turn, and after a measured, scene-setting pace for the first half or so, the tension begins to build. There’s no action-packed, blood soaked climax, but the film does a great job of walking the fine line between psychological and supernatural horror, and throws in enough to keep you guessing about what’s really going on.

Session 9 is director Brad Anderson’s first foray into horror, and he does a great job building tension as the film goes on. He gets maximum production value out of the real-life Danvers State Mental Hospital location, with shots oozing atmosphere as the camera creeps slowly round dark corners and down shadowy corridors.

The script by Anderson and actor Stephen Gevedon doesn’t really cover any new ground, but does a great job of showing the breakdown of the team as the week goes on, while the performances from the small cast are all superb, including a possible career best from Peter Mullan. Even David Caruso, and actor with no shortage of ego at the time, is watchable.

Video
On the whole, the video presentation is very nice indeed.

Session 9 was one of the first features to film digitally, at a then impressive 1080p resolution. This results in a very clean transfer, obviously free from any print damage. Colours are nice and bold, while good contrast and black levels mean we can still see just enough of what’s going on in the more darker scenes.

While not up to the pin-sharp standards of more modern digital cinematography, the transfer is generally nice and clean, with a good amount of detail.

There are a few shots that definitely exhibit a more ‘video’ look, but in general the image has a pleasing, natural quality to it.

Audio
The audio track is very good, and does a great job of setting the mood with an enveloping but subtle sound field.

Dialog is clear at all times, and while this isn’t a particularly showy soundtrack, the surround and LFE channels are very effective when it comes to atmospheric effects.

Extras
Well, where to start with the extras… Second Sight have brought us this new release of Session 9 as a 2-disc edition, and both discs are full to the brim with both legacy and newly produced bonus features.

Kicking off disc 1, to accompany the film we get two audio commentaries – the first, from the 2001 DVD release, features co-writer/director Brad Anderson and co-writer/actor Stephen Gevedon, while the second is a new 2021 track with The Projection Booth Podcast’s Mike White and Jed Ayres. Offering different perspectives on the production, reception and legacy of the film, both tracks are well worth a listen.

The rest of disc 1 is taken up with legacy special features, taken from the original DVD release and Scream Factory’s 2016 US release.

The Scream Factory consist of the approx. 50 mins ‘making of’ documentary “Return to Danvers: The Secrets of Session 9”, and the 20 mins “Horror’s Hallowed Grounds”, in which host Sean Clark gives us a tour of the filming locations – or what’s left of them at least. Both of these are interesting pieces, and worth checking out.

From the DVD, we get “The Haunted Palace: The Ghosts of Danvers Hospital” (13 mins), which looks at some of the myths and legends around Danvers, a 10 min selection of behind the scenes and storyboard comparisons, and 10 mins of deleted scenes and an alternate ending, both of which include optional audio commentary from Anderson.

Normally that would be plenty for us to be getting on with, but Second Sight are NOT here to fuck about, and we’re treated to a second bonus disc with OVER 3 HOURS of new interviews.

First up is a new chat with Brad Anderson running just over 36m, as he looks back 20 years to the making of the film. Next we get 20 mins or so with actor and co-writer Stephen Gevedon, followed by an hour with producer David Collins and director of photography Uta Briesewitz.

Then we get another 20-ish mins with production designer Sophie Carlhian, and just under 30 mins with composers Robert Millis and Jeffery Taylor. Things are rounded off with a 20 min visual essay from Alexandra Heller-Nicholas.

It sounds a lot – almost overkill – but all of these pieces just fly by. There’s naturally some overlap in what’s being discussed, but you’ll learn plenty of new information, and to be honest, it’s just great to see the film getting so much love 20 years after its release.

Once again, the quality is up to their usual very high standards.

Summary
Another belter of a release from Second Sight. Session 9 has long been a personal favourite, and over the years it’s been gratifying to see it pick up a loyal cult following within the horror community. They should feel very well rewarded with this new definitive release, which should also help the film pick up a new generation of fans. 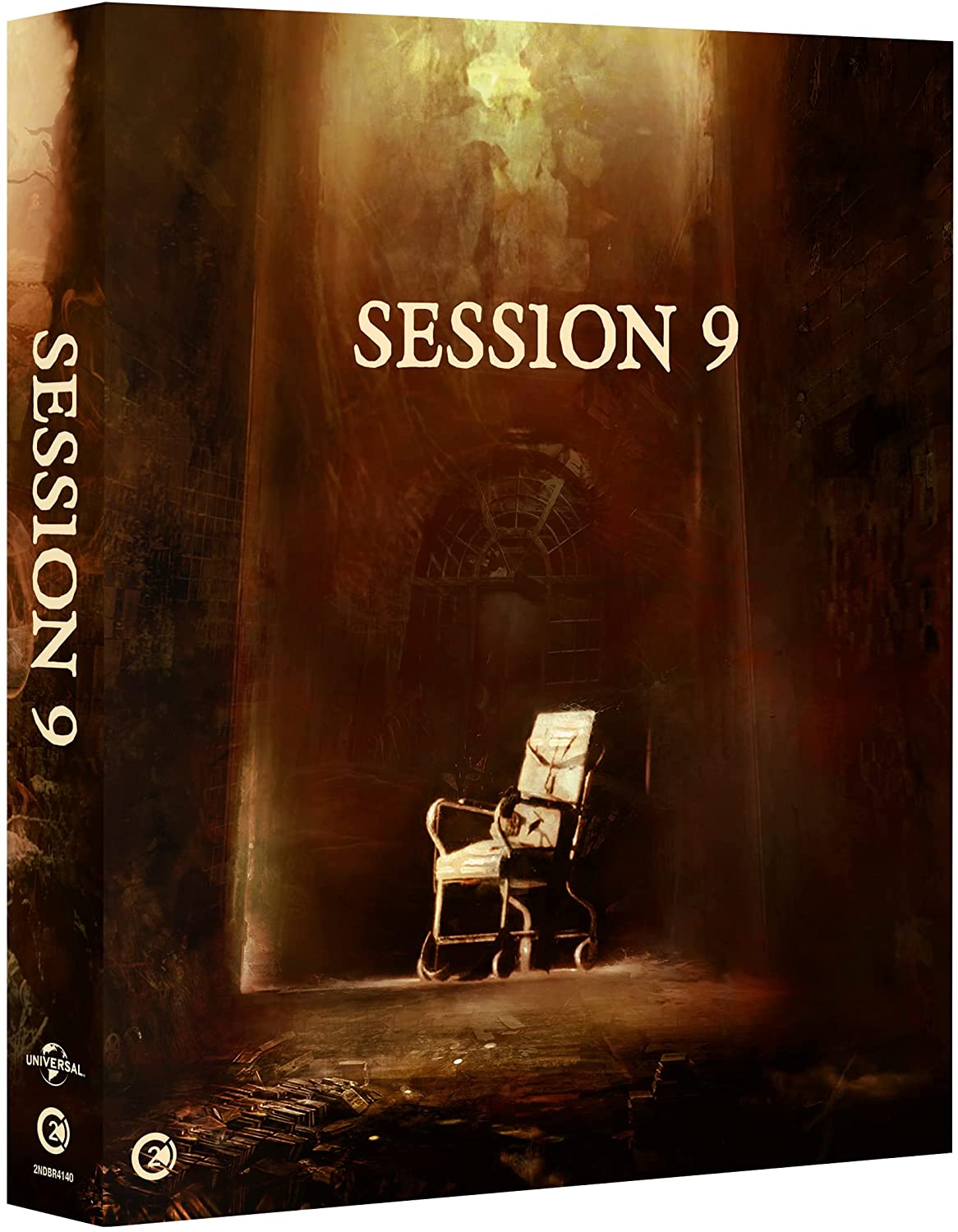 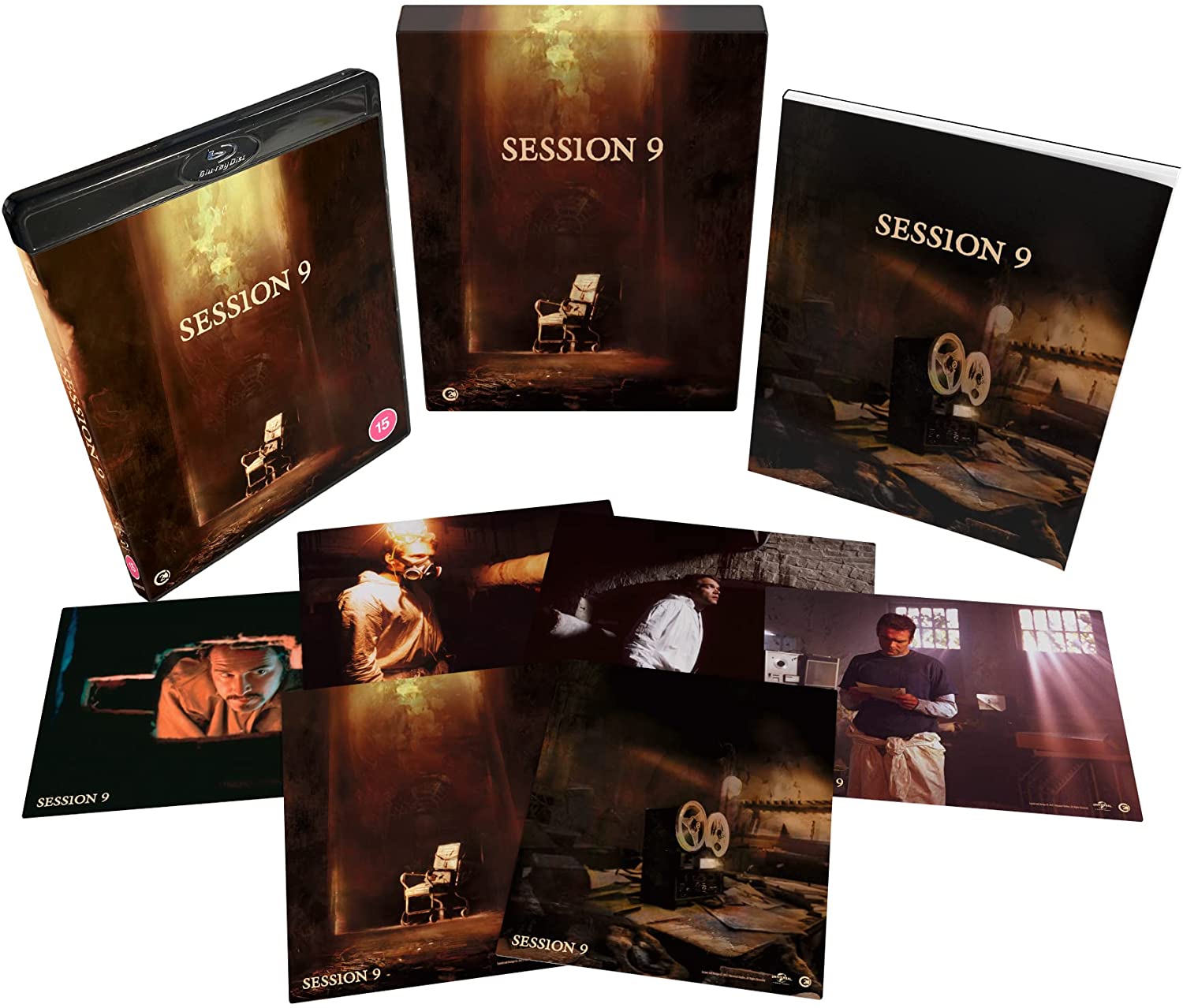