The new Basket Case trilogy steelbook gets a thorough review 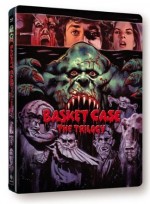 Second Sight Films have just released a new limited edition steelbook Blu-ray edition of Frank Henenlotter’s Basket Case trilogy, and TwitchFilm are on the case with an indepth review.

It seems they like what they saw, and the seems a good deal, given that we get all 3 movies and a bunch of extras.

Here are a few of TwitchFilm’s thoughts…

“Frank Henenlotter is a unique voice in cinema, and one who hasn’t made nearly enough films, if you ask me…

This set is the only way to go, don’t waste your time or money on anything else”

And the best news for international fans is that the release is region free!

As well as the 3 movies, we get the following extras:

You can read the full review here, and pick up a copy of this set via the link below.

Order your copy of the Basket Case Trilogy steelbook: Amazon.co.uk