CULTURE TRUMPET – REVIEW – We take a look at “Hawkeye” on Disney+ 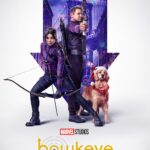 The MCU’s TV shows so far have been a mixed bag, with equally mixed receptions.

WandaVision got things off to a great start, laying the foundations of a story that we’ll see continue in 2022’s Doctor Strange sequel, Multiverse of Madness, while also introducing elements that we’ll see developed further down the line in other MCU shows and movies.

The Falcon and The Winter Soldier was less satisfying, but, within an unfocussed plot, did do a good job at exploring what it really means to be Captain America, and the often dark history and legacy of the super-soldier program. Hopefully Captain America 4 will pick up these threads and get things back on track. 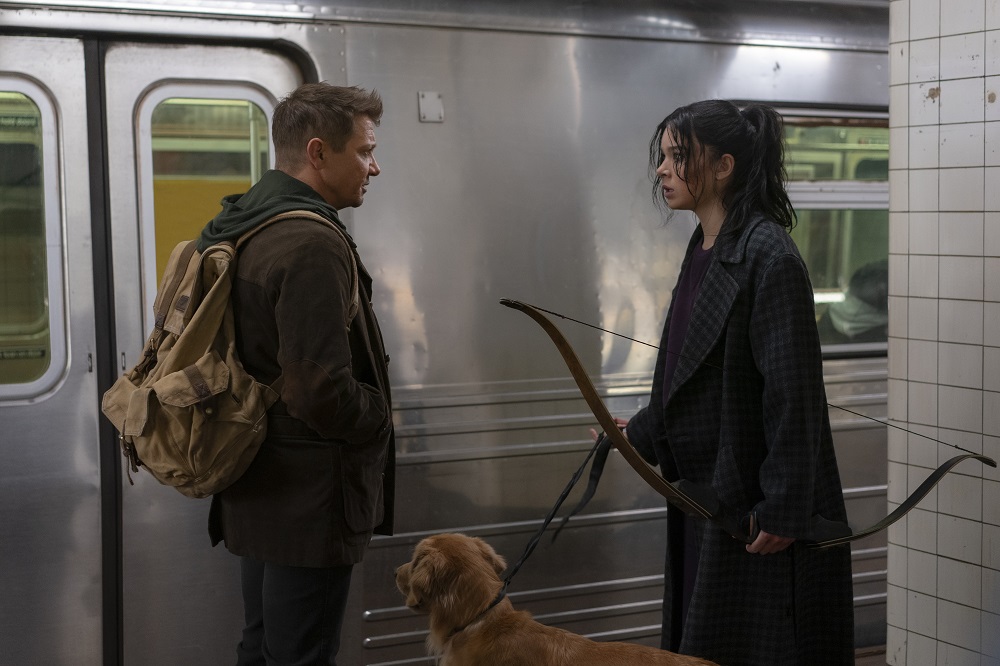 Loki is the definite highlight to date, with a brilliant central performance by Tom Hiddleston, along with a great supporting cast. The show laid the rules for the Multiverse, which seems due to be a major factor in the future of the MCU, not only in the Doctor Strange sequel, but also the hugely anticipated Spider-Man: No Way Home. We also got our first look at a Multiverse variant of Kang, the MCU’s next big bad, who will be making his presence known in Ant-Man and The Wasp: Quantumania.

And now, it’s the turn of Hawkeye, a character who – so far at least – has never really had his on-screen moment in the spotlight.

While it’s difficult know at this stage where the series may take him, or what impact it may have on the wider MCU, based on the first two episodes of the show, it’s going to be really fun finding out.

As the first episode opens, we’re dropped right into the 2012 Battle of New York, and we see a young Kate Bishop face tragedy as her father becomes one of the countless innocent bystanders to lose their lives. It’s also here that Kate sees Clint Barton (Jeremy Renner) – aka Hawkeye – for the first time, on a distant rooftop, fighting off Chitauri with deadly accuracy.

Inspired by the Avenger, Kate goes on to become a champion archer, her shelves straining under the weight of medals and awards. We next join her in the modern day as, having been expelled from university after a spot of showing off turns destructive, Kate (Hailee Steinfeld) returns home to New York, only to find her mother Eleanor (Vera Farmiga) now involved with the decidedly dodgy Jack Duquesne (played by the brilliant Tony Dalton aka Better Call Saul’s Lalo Salamanca). 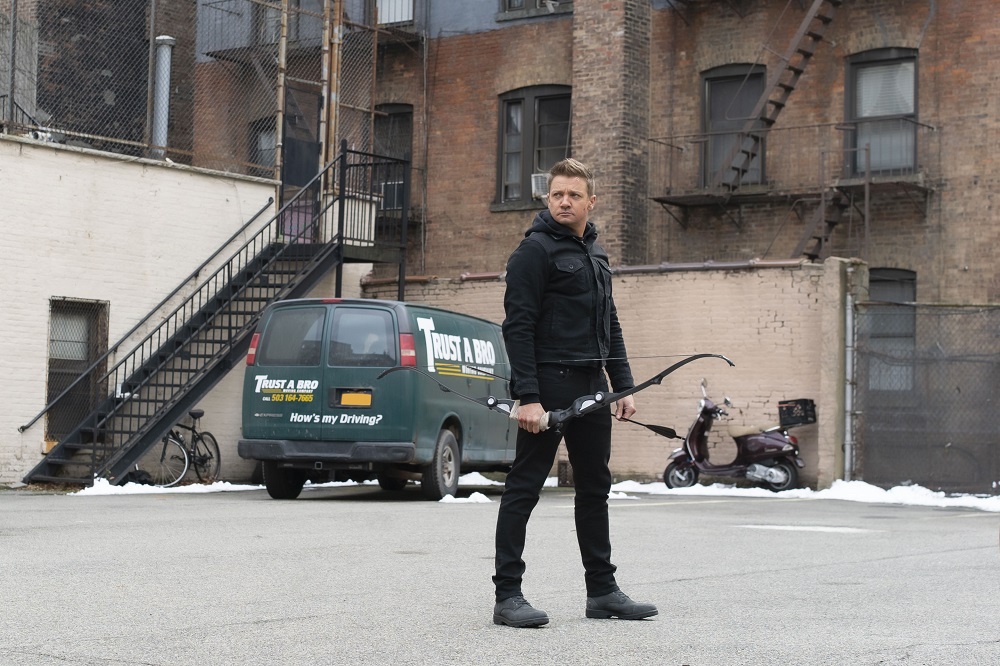 Sure enough, it’s not long before Kate stumbles across some shady shenanigans, in the form of a black-market auction for items of questionable legality, including the suit once worn by the vigilante Ronin, the alter-ego Barton briefly used following ‘the snap’.

Speaking of Barton, he’s minding his own business, enjoying a nice pre-Christmas trip to New York with his kids, and taking in a show – the musical Rogers, based on the life and adventures of Captain America and his superhero pals. He’s blissfully unaware of Kate, but of course it’s not too long before their paths collide.

There’s a LOT to like here. While the first two episodes don’t really showcase much of the action we’ve seen from the trailers and clips that have been released so far, they move along at a great pace, laying out the plot and introducing the cast of characters. It’s all helped by some great performances, especially from Steinfeld as Kate. It may be called Hawkeye, but this is really shaping up to be her show (of course, the character does become Hawkeye in the comics, so maybe this is an indication of where the story will go).

Thankfully though, the OG Hawkeye v1.0 finally gets a more high-profile part to play. Returning to the role, Renner finally gets some real character depth to play with. When we join him Hawkeye is mentally and physically worn down from his time with the Avengers, and has faced the dual trauma of being without his family for 5 years following the snap, and losing best friend Natasha (Black Widow) in the fight to defeat Thanos. Now, with his family returned, he just wants a normal life and to be back home for an old-fashioned Christmas. Those plans soon go sideways, of course, as Clint gets dragged into Kate’s mess.

Any kind of buddy/mismatched couple/team-up story massively depends on the chemistry of those doing the teaming up, and thankfully with Renner and Steinfeld, Marvel have found a fantastic combination. His exasperation at the young whippersnapper with ideas above her station, who doesn’t know what she’s getting herself into, contrasts perfectly with her over-confident, star-struck enthusiasm to get out and fight the bad guys, and prove herself to her hero. 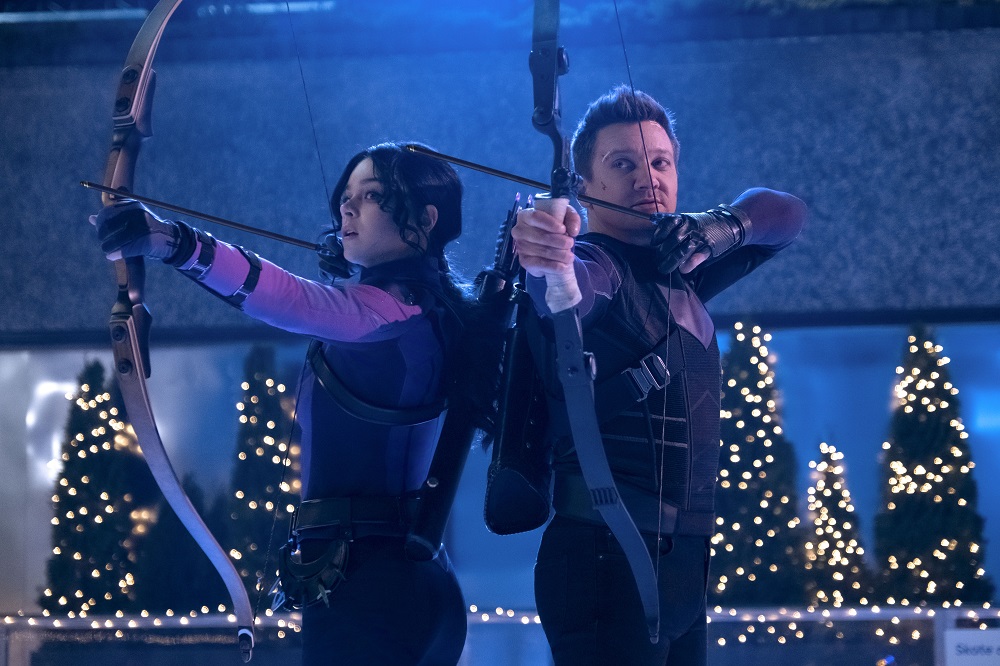 We know from her performances in films like Pitch Perfect and Bumblebee that Steinfeld has effortless charm and comedic skills, but she’s also physically impressive when it comes the action, and it’s one of those great occasions where an actor just fits the part perfectly, to the point where you can’t imagine anyone else in the role.

The supporting cast are all great. Farmiga of course is always dependable, and it’ll be interesting to see where her character goes and seeing if she knows more than she’s letting on. Fans of Better Call Saul will know exactly the treat they’re in for with Tony Dalton, and he’s on perfect, charming, moustache twirling form here – he’s DEFINITELY up to something, you mark my words. 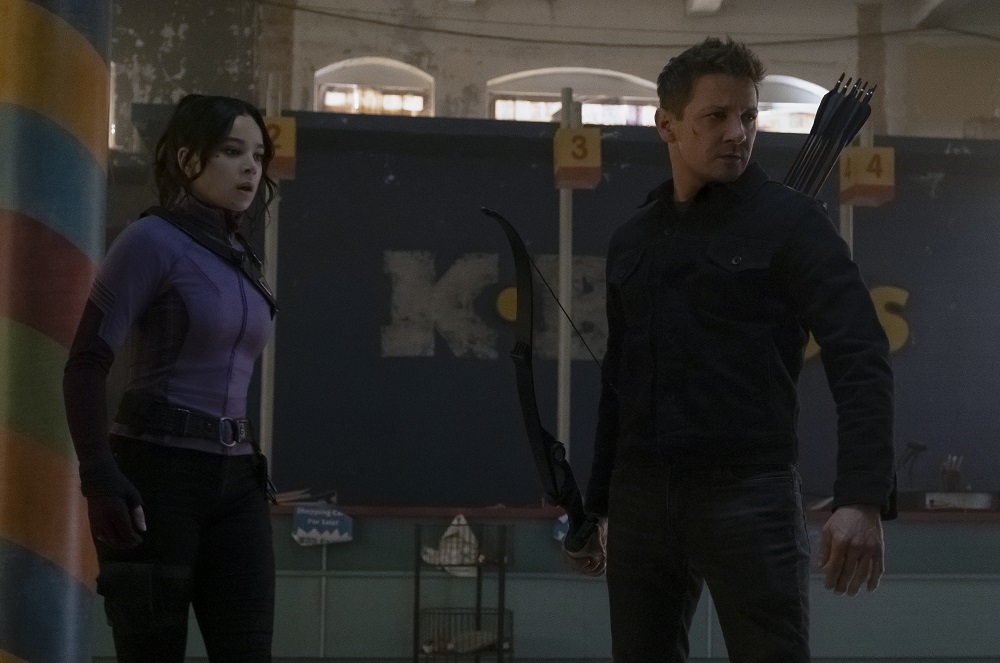 At this stage, it’s difficult to know where the show is headed, and whether it will have the same kind of the long-term impact on the MCU that the other Disney+ shows have had, but with the main villain(s) still be properly introduced, and an upcoming appearance by Black Widow’s Florence Pugh as Yelena, out for answers and revenge over her sister Natasha’s death, there will plenty to keep us entertained for the remaining 4 episodes.