EXCLUSIVE – We chat with UK artist Matt Ferguson about his work on the new “The Transformers: The Movie” release, and much more! 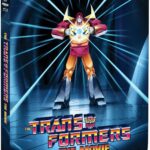 Animated 80s classic The Transformers: The Movie is getting a selection of new releases, and we were able to have a chat with the man behind the the cover art, the UK artist Matt Ferguson, who told us how this particular project came about, as well as his other work.

Let’s start with your latest project, which includes some stunning designs for the new 4K steelbook – as well as regular 4K and Blu-ray – release of Transformers: The Movie. Did the distributor contact you, or did you reach out to them?

It was kind of a bit of both. I had already started work on the Zavvi artwork, and then while I was doing Ghost In The Shell I mentioned I would love to do Transformers. Then at the same time Shout Factory in the US got in touch. And we just lined it all up to be a full on international release.

How much freedom were you given when it came to designing the new artwork? Did the distributor have any specific notes or requests? 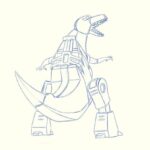 With the Zavvi art I was allowed to do it exactly how I wanted. Blu-Rays and Steels tend to be different though, there’s a brief I have to follow but also need to consider things like brand logos and shelf presence. The main instruction was to make it stick out on a shelf/online. So I just went wild and tried to make it as action packed and exciting as I could.

For fans of a certain age, Transformers: The Movie has already had a couple of iconic original posters. How did you go about trying to top those?

Well I didn’t really try to. I definitely took inspiration from them though. The Zavvi art is specifically inspired by the original US one sheet and also the UK poster, and then filtered through my way of doing things. The main thing I wanted was to make sure it was all accurate to the movie and used elements from the film, such as the circuits tunnel. 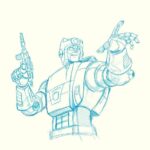 As well as the above mentioned releases, you’ve also worked with Zavvi on an exclusive 4K Collectors Edition, and a range of merch, include clothing, art prints and footwear. How did all of that little lot come about?

That was something that was already in the works, and it just made sense to line it all up and release everything at the same time for the 35th. I actually started on the project way back in the summer of 2020.

Your work covers a huge range of subjects the movie world, and many people may know you best from your incredible Marvel and Star Wars prints, but do you have a personal favourite piece that doesn’t get mentioned much?

Well I have worked on some big properties you are right. I think most people know me for Marvel. One that was personally important to me was Flash Gordon. Working on the 40th of that is a highlight of my career. I was actually born at home in 1983 because of that film. Long story short my parents were watching the TV premiere of the film and didn’t think I would come along as quickly as I did. I guess I really wanted to see the film as well!

Do you have a dream project you’d love to work on?

I am currently doing my best to pitch for the Star Trek The Motion Picture Director’s Cut that is finally getting a 4K remaster. I need to make art for that film. 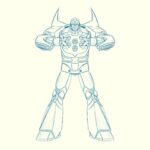 Do you ever get ‘artist’s block’, where you’re stumped on how to approach a new piece of work? How do you get through that?

All the time. On every project. I usually walk away and have a break. Fresh eyes after a rest really help in those situations. I also listen to the films soundtrack or just watch it on repeat until I get an idea. It’s just about working at until I feel it’s something I could be happy with.

I’m sure much of your work is covered by some pretty strict NDAs, but is there anything in the pipeline that you can tell us about?

I am indeed under NDA yes. I wish there was something I could talk about… But I do have a couple more pretty big re-releases lined up.

Apart from working on your own art, you’re also co-founder of Vice Press, which showcases other artists’ work as well. How did that start? 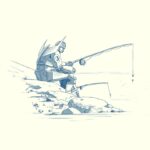 Me and my business Partner started Vice Press to make posters and collectibles for the UK market. We wanted to make pop culture art for fans. We started small and have grown over the past 7 years, and now provide new art prints based on all sorts of popular brands, with a focus on the UK market.

Finally, and most importantly, are we ever going to get an Alien 3 ‘Fury 161’ print to match your Alien and Aliens ‘LV-426’ & ‘Acheron’ ones? Asking for a friend.

I don’t think so. But never say never. If I were to do it I would do my take on the exterior mate painting from the Fincher workprint.

A huge thanks to Matt for taking the time to chat with us.