Alongside Drew Struzan, the late John Alvin has been responsible for some of the most iconic movies posters of the last few decades.

Now, the UK’s Vice Press (home of fan favourite Matt Ferguson) and the US’s Bottleneck Gallery are bringing us the first in a series of new limited edition prints of some of his most famous work, starting with E.T.

A limited foil variant is already sold out, but the regular timed print will be available to order until Monday April 22nd at 12pm US Eastern time, that’s 5PM UK time, so don’t miss out!

We are thrilled to announce the partnership of ISH x Bottleneck Gallery x Vice Press with Andrea Alvin and the John Alvin Estate and we would be very grateful if you had the time to feature this very special release on your website.

John Alvin’s legendary career is unmatched in cinema illustration / design as he created art and theatrical posters for legendary films like GREMLINS, BLADE RUNNER and E.T. and several more that we are excited about sharing in this new series. Each poster released in the John Alvin series will be sourced from original art and files from John’s archive and will be approved, not only by the studio, but by Andrea Alvin with a signed and embossed certificate. We are so excited to not only release classic posters from John’s career but also unreleased FINISHED works for some of your favorite films that have rarely or NEVER seen before!

Up first is E.T…. one of the most successful films of all time and beloved by the world over. The classic original theatrical poster was created by John Alvin and nobody had any idea of the impact it would cause! Seemingly everywhere today, this image was painted by John using very little reference from the actual film as the studio wanted to keep E.T. hidden prior to the film’s release. Andrea Alvin tells the story of how John was taken to the studio and shown a floppy hand that looked like a rubber chicken and then expected to create something to sell this new Steven Spielberg film! He went to work and used his daughter for the human hand reference on the poster and actually created the E.T. logo we all know by hand cutting the “E.T.” out of cardboard and painting it onto the actual art with an airbrush to achieve the glow. (Read more about it in The Art of John Alvin by Andrea Alvin / Titan Books)

John was often asked, “Of all the posters you created, which was your favorite?” He would usually answer E.T. because of the movie’s great success. It was also “the big one that didn’t get away.” His work was on everything from keychains to bed sheets. IT WAS CRAZY!” – Andrea Alvin 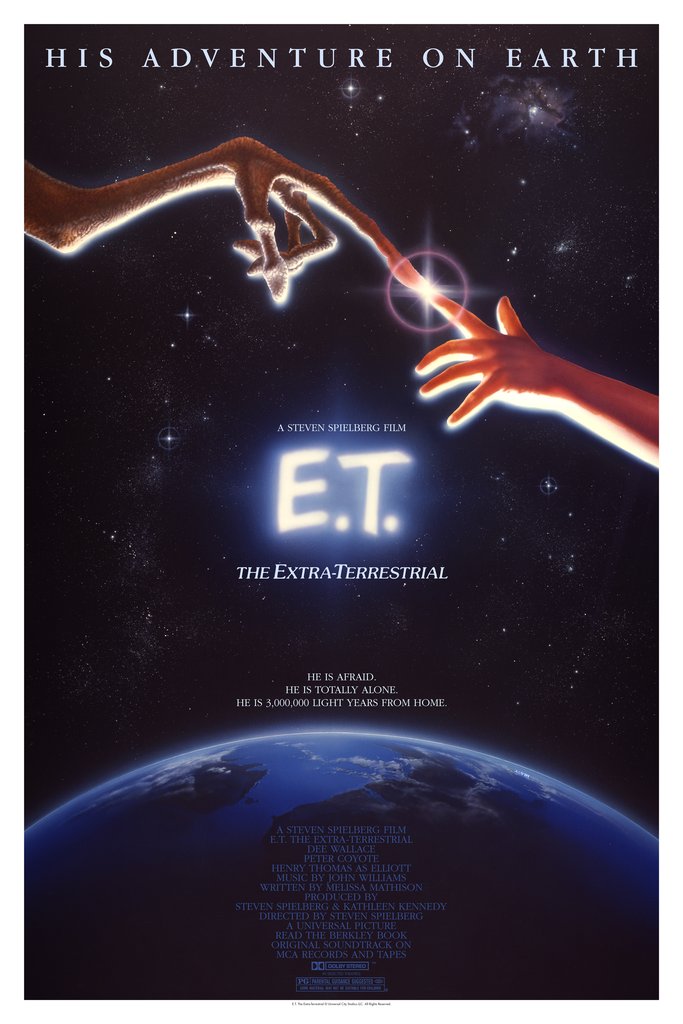