Welcome to the latest installment of our Meet The Collectors series, and this time it’s the turn of Australian resident Mark Wilson.

Mark actually got in touch some time ago, but several factors (mainly me being busy in the real world and managing losing his email. Whoops) have meant there’s been a delay getting this one to you.

In terms of a collection, you can all go home now, we have a winner…

I’ve been a passionate movie collector for as long as I can remember. I’m 33 now and I honestly can’t remember a time when I didn’t collect movies. One of my earliest memories is of getting Home Alone on VHS for Christmas when I was around 7 or 8. Pretty sure I watched it over and over until my crappy old VHS player chewed up the tape. Ever since then I’ve been hooked on growing my collection. From VHS to Laser Disc, DVD to HD-DVD, Blu-Ray and now Ultra HD Blu-Ray (I’ve just purchased Mad Max Fury Road – my first in 4K), I’ve grown my collection with every major home video format.

I love everything about collecting movies. For me it’s not just about owning the movie. I love the anticipation of waiting for a movie’s home release. I love browsing the web, learning of what country is getting which artwork and choosing which release is the one for me. I love discovering new special editions housed in amazing box sets (the Matrix collection in the Nebuchadnezzar and the Alien Anthology in the Xenomorph head are two of my all-time favourites). I love to display my collection (I often enjoy rearranging it for fun), and I look forward to picking where to position my new movies on the shelves when I get them.

Although I can’t remember my first Blu-Ray steelbook I did buy a number of DVD steelbooks way before Blu-Ray was released. I remember buying a bunch of 20th Century Fox Definitive Editions (Daredevil, Alien, Predator and Rocky etc.) and they were each released in beautiful steelbook packaging.

I think the artwork for Ex Machina’s steelbook is simple yet stunning, and so too is American Psycho, yet I also love the vibrancy and colour of the Mars Attacks’ steelbook, and also pretty much anything with a lenticular cover. I’m a sucker for a lenticular cover so when I discovered Marvel’s range of lenticular steelbooks I was a very happy collector.

I did buy the recent Fantastic Four movie in a cool steelbook and the movie was fairly poo. And as much as it’s a bit of a cliché to admit I’m not a huge fan of The Phantom Menace but had to have it to complete the Star Wars steelbook collection. I was also a bit disappointed by the choice of each character featured on the covers. I found it strange Yoda was the only hero character and the rest we’re all villains. I would have loved to have seen each of the seven movies (including The Force Awakens Kylo Ren steelbook) feature a villain on one side and a hero on the opposite. They would have looked awesome facing outwards on display. Still, I’ll forgive them if Episodes 1-9 are released in a model of the Death Star, or the Millennium Falcon, or Darth Vader’s helmet… come on Disney, make this happen!

I would but I do find it a little disappointing when there’s a steelbook release featuring the exact same artwork as the standard plastic case release. We often have to pay a little extra for the steelbook edition so why not make them all with different artwork?

The Monster Squad (1987). Directed by Fred Dekker, written by Shane Black and with creature effects by the legend Stan Winston. There was a DVD hardbox released in Germany and limited to only a 100 worldwide but if I had to pick any movie which deserves a steelbook Blu-Ray it’s this. And not just one steelbook either. I’d love to see 5 separate steelbooks – each one featuring a different character (Count Dracula, Frankenstein’s Monster, the Wolf-man, the Mummy and the Gill-man), that would be awesome. I know a lot of people don’t like to double-dip. Collecting movies can be an expensive hobby and buying the same movie more than once is a waste of money for a lot of people. Personally I don’t mind buying the same movie multiple times if each release is housed in a different, interesting looking case with nice artwork.

My collection is proudly on display in my very own movie library/man cave. I’m very much British born and bred but I relocated to Australia in 2011. I had to get my collection transported (nervously) via shipping container across the ocean. When it finally arrived in Australia 4 months after I did, it was a fun experiencing opening up all of the packing boxes and finally getting to position the collection on my shelves.

I’m a keen gamer when I have the time and have a pretty cool games collection. My partner’s also a bit infatuated with Pop Vinyl figures. We’ve also recently bought 3 kittens… do they count?

My partner is very understanding. She knows how long I’ve been collecting and how much time and money has been invested in it. My mum thinks I should be shipped off to a Blu-Ray Rehab clinic if there was such a place and my friends all love it because they’ve never had to pay for any rentals, ever. 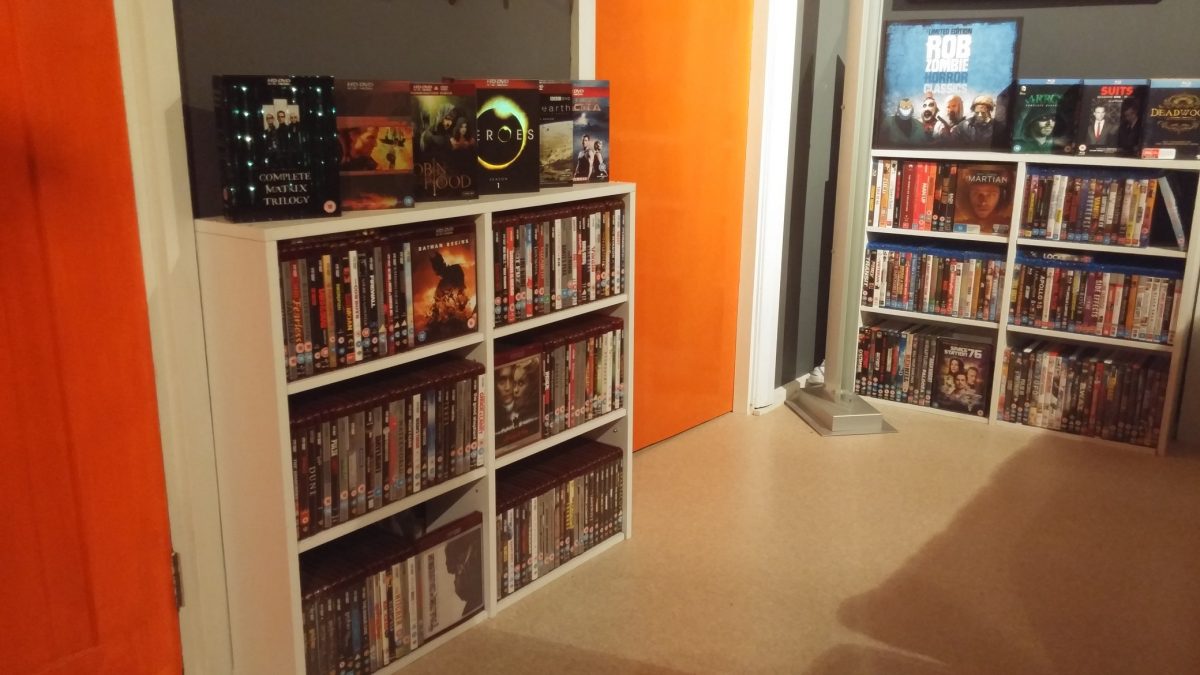 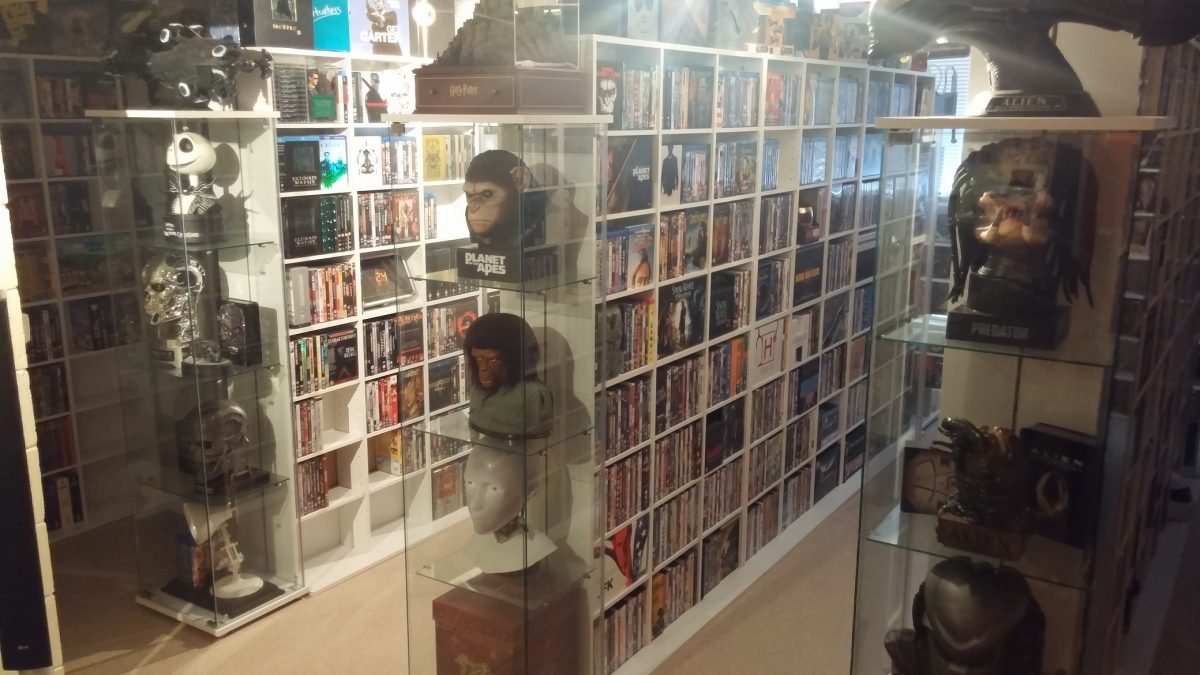 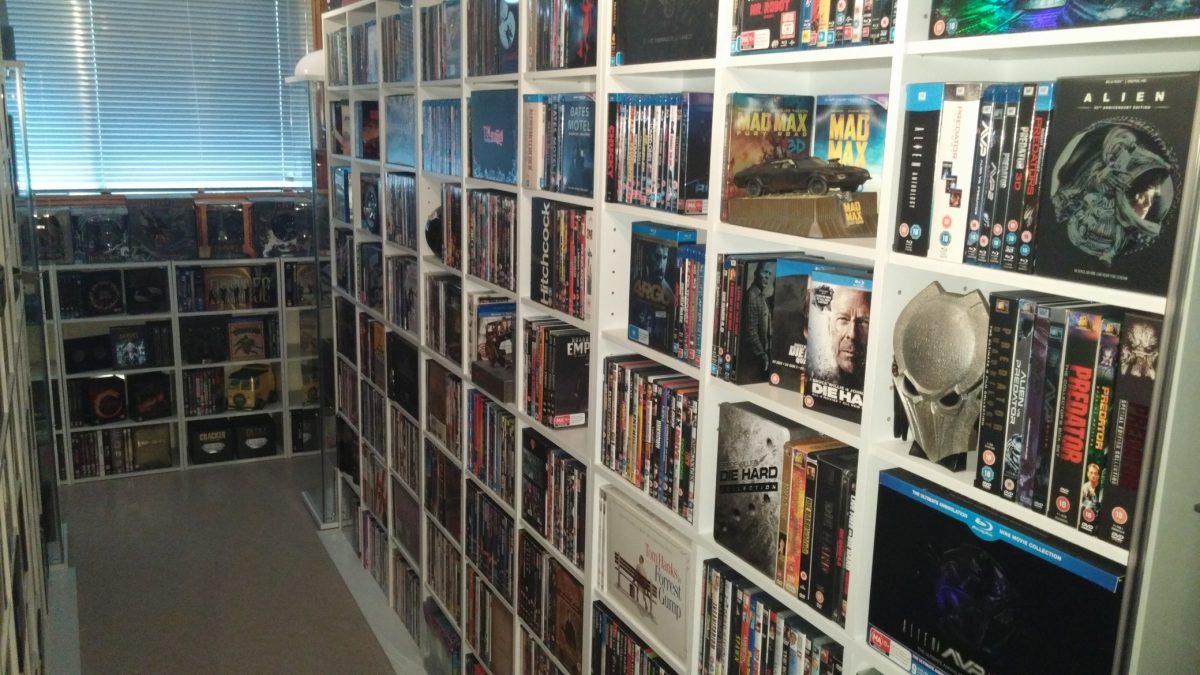 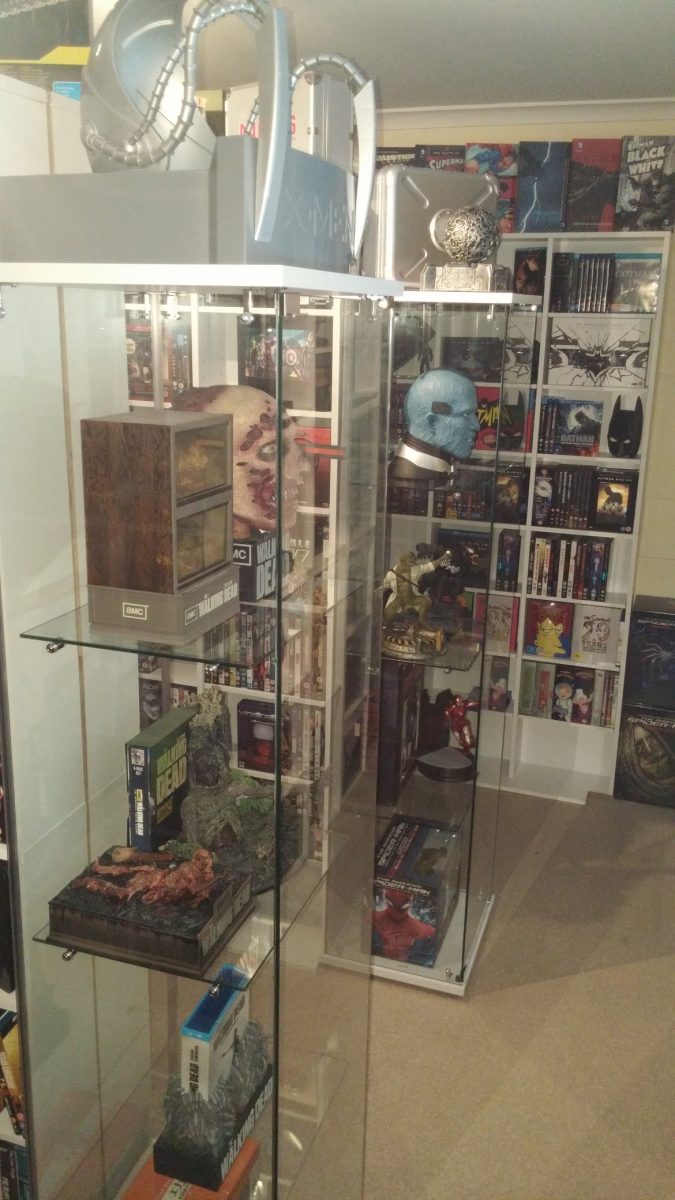 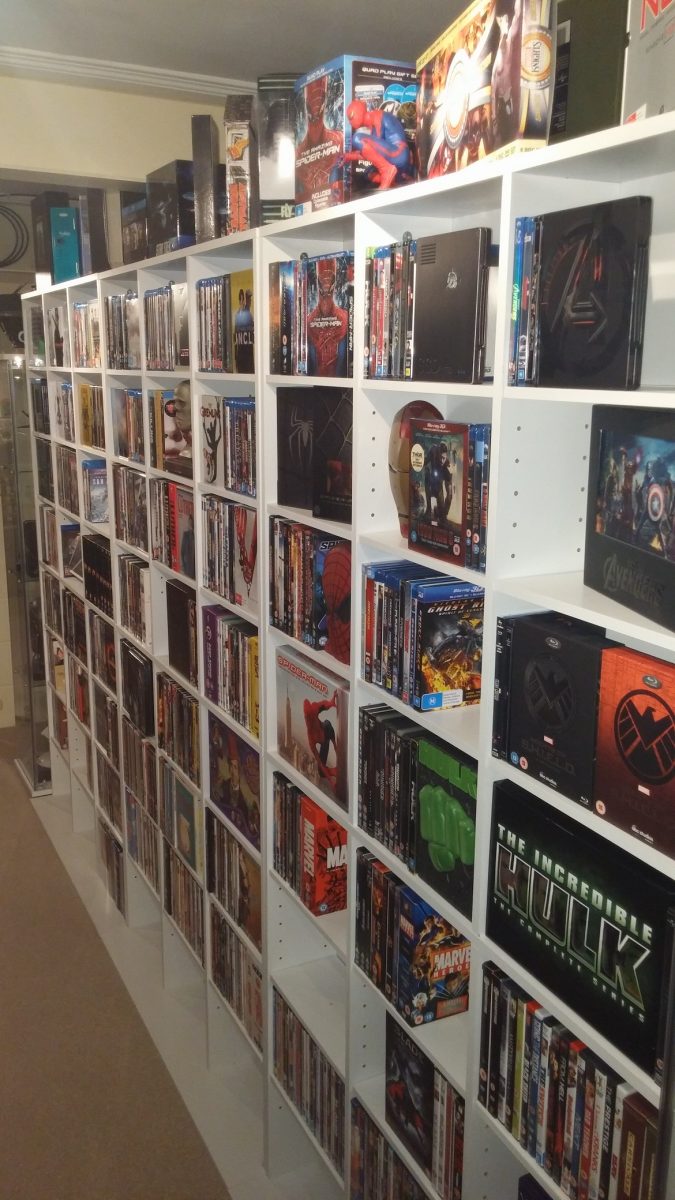 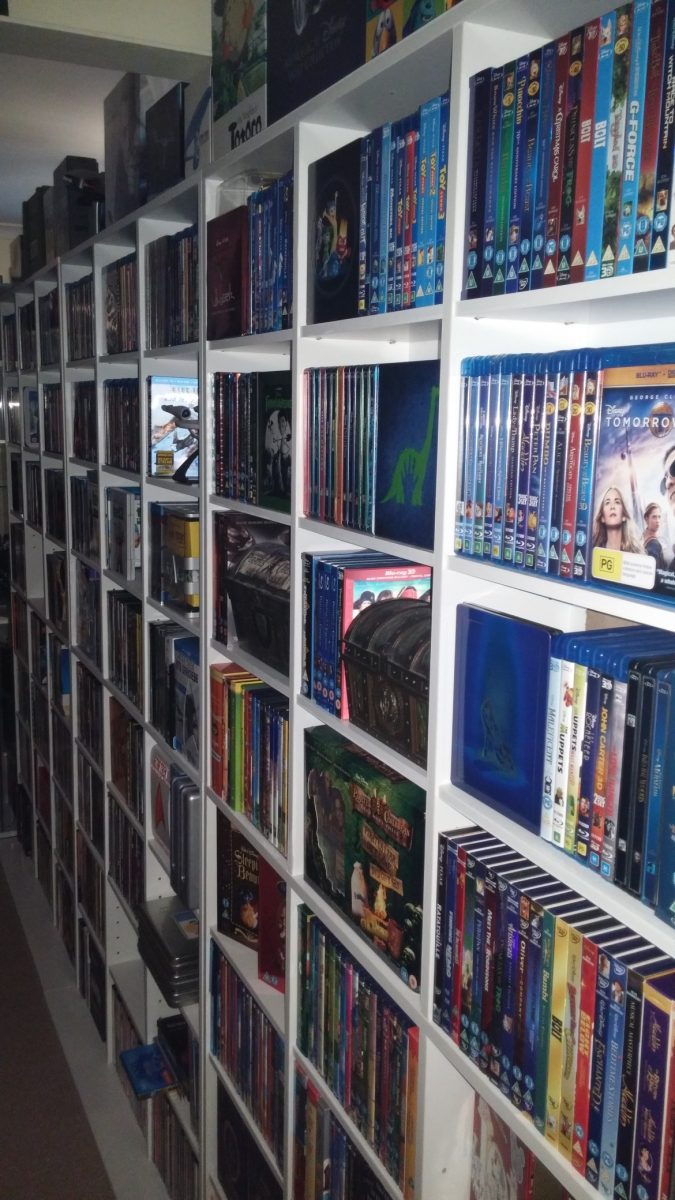 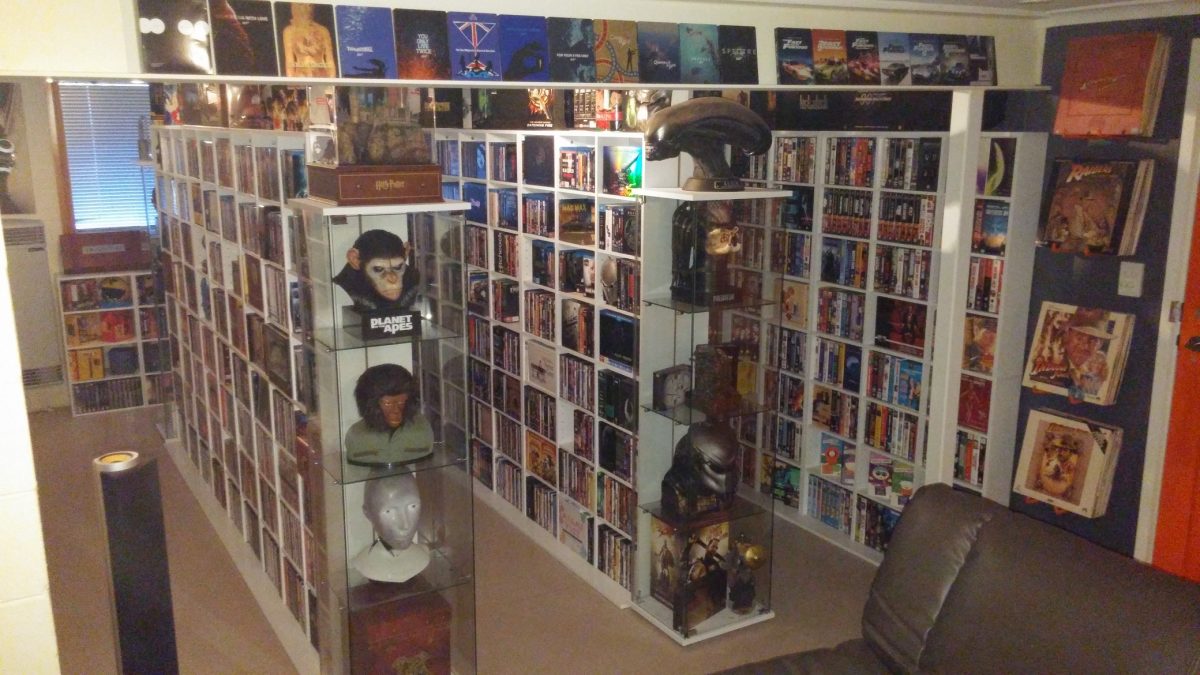 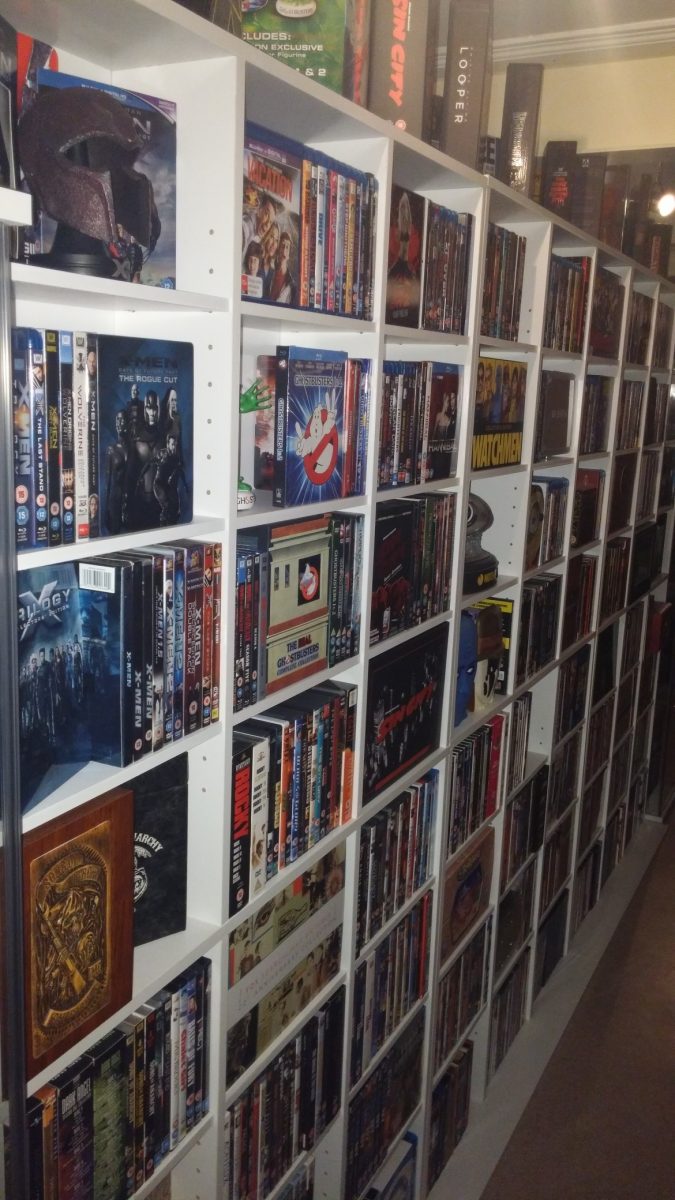