On November 8th, the gang at 88 Films are bringing us this awesome new steelbook release of the The One, starring Jet Li.

The will include a slipcase and poster, though on-disc extras are still TBC. Given that this is an 88 Films release though, we’re sure it’ll be up to their usual great quality.

Pre-orders are live now and we’ll add more links as we get them. Thanks to reader Ian for the heads up!

In a stunning dual role, international action star Jet Li portrays Gabriel Yulaw, a police officer confronted with a sinister form of himself escaped from an advanced, parallel universe and intent onkilling Gabriel. His alter ego’s hunt culminates in a fateful battle between good and evil that changes Gabriel’s perception of reality and forces him to examine the evil hidden within himself. The One features riveting martial arts and innovative special effects. 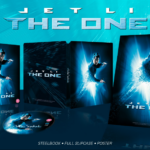