Arrow Video are bringing Fall of the House of Usher to a brand new, feature-packed UK Steelbook edition.

You can check out the pre-order link, extras and artwork below (click to enlarge):

When exploitation maestro Roger Corman decided to raise his game by hiring Vincent Price to star in an adaptation of a classic tale by Edgar Allan Poe, he set in train a series of Poe adaptations that would redefine American horror cinema.

When Philip Winthrop (Mark Damon) visits his fiancée Madeleine Usher (Myrna Fahey) in her crumbling family mansion, her brother Roderick (Price) tries to talk him out of the wedding, explaining that the Usher family is cursed and that extending its bloodline will only prolong the agony. Madeleine wants to elope with Philip, but neither of them can predict what ruthless lengths Roderick will go to in order to keep them apart.

Richard Matheson’s intelligent, literate script is enhanced by Floyd Crosby’s stylish widescreen cinematography, but it’s Vincent Price’s anguished conviction in one of his signature roles that makes the film so chillingly memorable over half a century on. 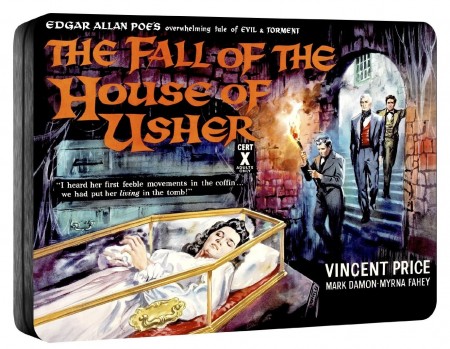