UPDATE – This edition has now sold out. Often a few copies are freed up around release time, as Zavvi cancel bulk orders. If that happens here we’ll let you know!

While HMV have the regular 2D & 3D Blu-ray steelbook release for Transformers: The Last Knight, Zavvi have grabbed the UK exclusive for the 4K release, which is limited to just 500 copies.

As well as the 4K disc, this will also include the standard 2D Blu-ray.

Release date and final art are TBC, but pre-orders are live now.

Also available is a steelbook and t-shirt bundle, which you can pre-order here.

The Last Knight shatters the core myths of the Transformers franchise, and redefines what it means to be a hero. Humans and Transformers are at war, Optimus Prime is gone. The key to saving our future lies buried in the secrets of the past, in the hidden history of Transformers on Earth. Saving our world falls upon the shoulders of an unlikely alliance: Cade Yeager (Mark Wahlberg); Bumblebee; an English Lord (Sir Anthony Hopkins); and an Oxford Professor (Laura Haddock). There comes a moment in everyone’s life when we are called upon to make a difference. In Transformers: The Last Knight, the hunted will become heroes. Heroes will become villains. Only one world will survive: theirs, or ours. 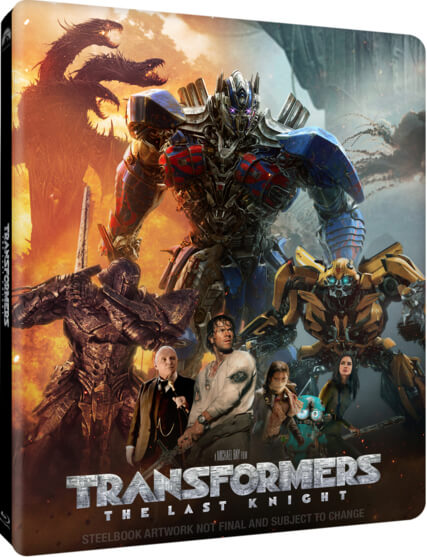