The longer US cut of “The Shining” is finally getting a UK release as part of Warner’s Premium Collection, exclusively from HMV

This isn’t a steelbook release, but it’s very exciting anyway.

Fans of Stanley Kubrick’s horror masterpiece will know that the US release of the movie is approx 30 minutes longer. This isn’t a Director’s Cut though, as Kubrick himself edited the film down for its international release following lacklustre reviews and box office in the States, and he preferred the shorter version.

Nevertheless, this longer version has previously not been released in the UK, but now, following a successful limited screening at the BFI in 2012 and Frighfest in 2014, we’re finally getting the longer version here, in this new Premium Collection release, part of a range available exclusively through HMV (Other titles include Gremlins, Little Shop of Horrors Director’s Cut, and more).

The Premium Collection, revered films across all genres celebrated in a Premium package set containing the film on Blu-ray, DVD and a Digital Copy (via the Ultraviolet service) giving fans a must own version that allows them to watch however they choose. Each release also includes a collectible slipcase and 4 collectible artcards featuring the films key art and 3 lobby cards style stills.

The Shining: Extended Cut adding 25 mins of additional footage included in the US cinema release but cut from the original UK cinema release. Screened by the BFI in 2012 and at Frightfest in 2014 it’s never been released on DVD or Blu-ray in the UK. 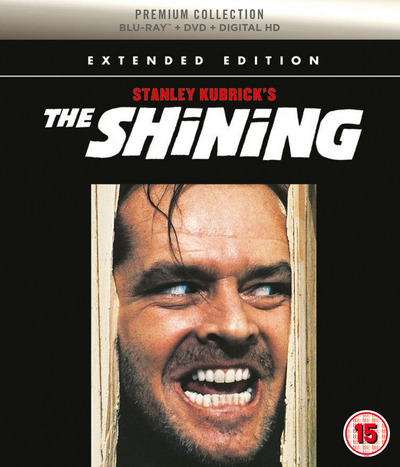