Video game fans – Zavvi are bringing you an exclusive Steelbook release of “The Elder Scrolls Online: Tamriel Unlimited” in June

Zavvi are extending their exclusive steelbook range into gaming, with a trio of The Elder Scrolls Online: Tamriel Unlimited releases on June 9th.

These are very limited releases, and pre-orders will be live at 6pm on April 29th.

After 20 years of best-selling, award-winning fantasy role-playing games, the Elder Scrolls series goes online. Experience this multiplayer roleplaying game on your own or together with your friends, guild mates, and thousands of alliance members. Explore dangerous caves and dungeons in Skyrim, or craft quality goods to sell in the city of Daggerfall. Embark upon adventurous quests across Tamriel and engage in massive player versus player battles, or spend your days at the nearest fishing hole or reading one of many books of lore. Use any weapon or armor at any time and customize your abilities to play the way you want. The choices are yours and the decisions you make will shape your destiny and the persistent world of The Elder Scrolls Online: Tamriel Unlimited.

The Elder Scrolls Online is set roughly 1,000 years before the events in The Elder Scrolls V: Skyrim and the coming of the Dragonborn, and just before the rise of Tiber Septim, the first Emperor of Tamriel. Three Alliances have emerged across the continent, each struggling for supremacy over the land. As these great powers battle one another for control of the Imperial City – and with it all of Tamriel – darker forces are moving to destroy the world. 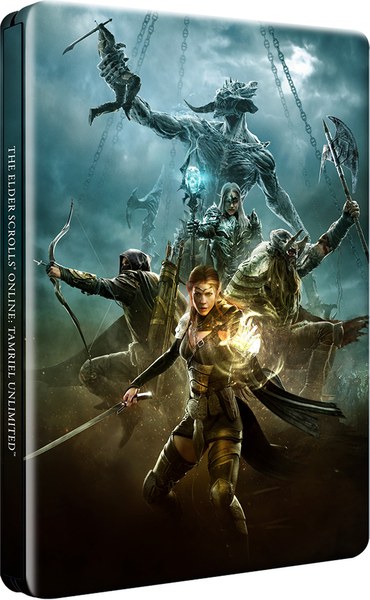