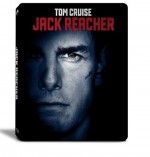 The Tom Cruise action thriller Jack Reacher is heading to Blu-ray, and Amazon France have steelbook edition up for pre-order, with a release date of May 23rd.

While the movie met with a positive critical reaction, unfortunately it failed to set the box office alight, so plans for a franchise based on the best selling books are up in the air at the moment. That’s a shame, as the movie is a decent, gritty thriller, and it’s nice to see Cruise playing someone a little bit more ruthless in their methods.

The Amazon France listing doesn’t specifiy any extra features, however the UK’s BBFC have recently classified the following featurettes, so it’s a safe bet this will be included on most, if not all, international releases:

Check out the pre-order link, artwork and trailer below: