The hit big screen adaptation of the classic childrens’ book series Paddington is heading to UK steelbook on March 23rd with a Zavvi exclusive.

Pre-orders will be live at 10am UK time on December 25th, so ignore the ‘sold out’ button before then. 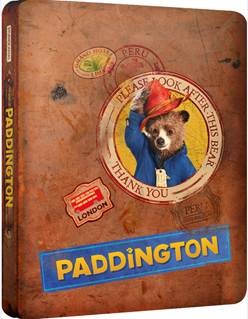 Adapted from Michael Bond’s beloved books, Paddington follows the comic misadventures of a polite young Peruvian bear with a passion for all things British, who travels to London in search of a home.

Finding himself lost and alone at Paddington Station, he begins to realise that city life is not all he had imagined – until he meets the kind Brown family, who read the label around his neck (‘Please look after this bear. Thank you.’) and offer him a temporary haven. But little do the Browns realise just how much comic mayhem one young bear will bring to their family life, and when this rarest of bears catches the eye of a sinister, seductive taxidermist, it isn’t long before his home – and very existence – is under threat…