This review was originally published on our sister site CultureTrumpet.com 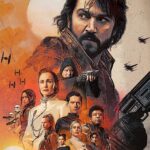 When Rogue One: A Star Wars Story was first released, it felt like a breath of fresh air. Here was a film that was (largely) removed from the Skywalker saga, giving us a fresh group of characters, and telling a previously untold – but vitally important – story in the Star Wars canon.

It was clear going in that most, if not all, of the characters were not going to make it out alive, and, of course, we ultimately knew that their mission would be a success, but that didn’t matter – the story was compelling, with real stakes, and a grounded, more intimate feel that kept us hooked.

Rogue One did suffer from the curse that afflicts many ensemble films though, with many of the supporting characters lacking definition.

Andor, the next Star Wars TV show from Disney+ attempts to remedy that for at least one of those characters, as it takes us back to 5 years before the events of Rogue One, to see how Cassian Andor evolved from being simply a nuisance on a far-off Imperial-run outpost, to a leading figure in the Rebellion.

As the series opens, we’re re-introduced to Cassian Andor (Diego Luna) on his adopted homeworld of Ferrix, while we learn via flashback about his childhood, and the tragic events that brought him there as a youngster.

With the help of Maarva (Fiona Shaw) who rescued and raised him from childhood, and close friends including Bix (Adria Arjona), Cassian scratches out a living as a small-time smuggler and trouble-causer, and with a growing reputation he soon gains the attention of the still nascent Rebellion, in particular their spymaster Luthen Rael (Stellan Skarsgård), who recruits him to help on an upcoming mission, an attack on a small Imperial base.

And so begins Andor’s path to the events of Rogue One. Again though, we know the character’s fate is to die on Skarif, so is it really possible to get invested in the show? Well, based on the first four episode that we have seen, the answer is a rock solid, cast-iron ‘Yes’.

Pulling back even further from the events and characters of the main series, creator Tony Gilroy (who was a co-writer on Rogue One, as well as the first four Bourne films) focuses instead on a much more intimate, initially smaller story, showing how such large scale rebellions are born out of those little acts – some bribes here, the odd bit of sabotage there – that would not raise much suspicion taken in isolation, but soon add up to something much more powerful.

What’s also refreshing is the show’s take on the Imperial characters. There are none of the high-profile – dare I say fan service – figures like Darth Vader or the Emperor (so far at least – that may change as the story moves along). Instead, we get to spend time with the hard working, under-staffed troops on the ground, as well as in-fighting and petty office politics at the Imperial Security Bureau (ISB).

Here we see characters like Syril Karn (Kyle Soller), who becomes obsessed with catching Andor, while his boss Chief Hyne (Rupert Vansittart) simply wants to avoid all the paperwork and hassle, much preferring an easy life behind a desk.

Dedra Meero (Denise Gough) is a character to look out for. An ambitious Supervisor at ISB headquarters, while she’s hellbent on bringing down the rebellion, it’s clear she also has her own career interests at heart.

Then of course we have Mon Mothma, played once again by Genevieve O’Reilly. Rather than another brief appearance at some rebel base, this time we see her earlier life as a senator, clearly growing conflicted and disillusioned with the lack of political will to limit the Empire’s power and turning to desperate measures achieve her aims.

Most pleasingly, Diego Luna is finally given a chance to flesh out Cassian Andor. Not the most interesting character in Rogue One, this show does a great job of filling in some well-needed background and motivation, and Luna gives it 100%. This is clearly a character he loves, and his performance is pitch perfect.

The rest of the cast are filled out by a host of familiar – mainly British – character actors, and all of them are superb.

What really impresses though, is the look of the show. While there are clearly some scenes shot in the LED wall ‘volume’ that was pioneered by The Mandalorian, the bulk of Andor is filmed on real sets, huge backlots, and stunning locations. Where the earlier Star Wars TV shows often feel cramped or artificial in their staging, Andor feels real. The overcast skies, the mud and grime, the sweeping landscapes – no doubt occasionally extended and augmented with the help of CGI – are all the real deal, and it gives the show a welcome and unique sense of scale.

Anyone expecting an action-packed show may be disappointed based on the first few episodes, but if you’re looking for an intriguing, grown up story, compelling characters and visuals that do away with the fake sheen of the other Star Wars shows, this is series for you.

Andor really does set the benchmark for future Star Wars shows. By ditching fan service cameos and ties to the Skywalker saga, Gilroy gives the story the freedom to take off on its own path, and I can’t wait to see where it goes.