Cult classic connoisseurs Arrow Video are adding to their collection with Lifeforce, which is due for a 2-Disc release on September 30th.

As usual for Arrow, the discs are packed with extras, and you check out the details, along with a pre-order link and enbiggenable artwork below!

When a space shuttle crew finds a mysterious spacecraft containing three human-looking creatures in a state of suspended animation, they bring them back to Earth for further investigation.
It’s only then that scientists discover that they are in fact a race of space vampires that feed off people’s life-force rather than their blood. So when they escape and run amok in London, the consequences are apocalyptic – and the shuttle crew’s only survivor (Steve Railsback) seems to be the only man who can stop them.

Based on Colin Wilson s novel The Space Vampires , co-written by Dan O Bannon (Alien, Return of the Living Dead) and directed by Tobe Hooper (The Texas Chain Saw Massacre, Poltergeist), this lively sci-fi horror romp has a stellar cast including Peter Firth, Frank Finlay and Patrick Stewart – although it’s Mathilda May’s appearance as a naked female alien that attracts most attention to this day. 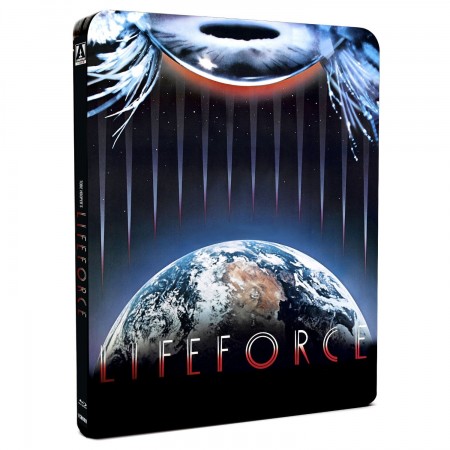