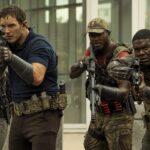 Back in the eighties, legendary comics scribe, Alan Moore, cut his teeth working for British cult classic 2000AD on a series of strips entitled ‘Time Twisters’ which revolved, as the name implied, around some non-chronological shenanigans where the linear aspects of moving through time resulted in some brilliantly paradoxical parables which young me absolutely adored.

These tales ignited my imagination so much, they evoked a lifelong love of time travel tales that meant the likes of The Terminator, Planet of the Apes and Back to the Future were not just adored, but analysed and dissected way more than I care to admit.

Thus, when I heard about the new film, The Tomorrow War (streaming now on Amazon Prime), and what its plot entailed, I was fully onboard, invested and excited.

The story, in case you haven’t been on social media for the last week, revolves around everyman biology teacher and family man extraordinaire, Dan Forester (Chris Pratt), who wants to move into the private R&D sector so he can better provide for the wife and daughter he adores.

One fateful night in 2022, his and the rest of humanity’s world is turned upside down when some strange visitors gatecrash the Qatar World Cup to announce they’re fighting a losing conflict in the future, 2051 to be precise, and they need the people of the present to join their war efforts, lest we all face global extinction.

Fast forward a year and things aren’t looking good for us as a species, and to no-one’s surprise, Dan finds himself conscripted to join the fight against these thus far faceless foes.

Following some soul searching, Dan finds himself flung through time and literally falls into a battle against, it must be said, xenomorphic inspired nasties who don’t seem to want to conquer the planet, just use the dwindling human numbers as Happy Meals. 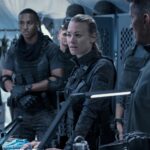 Prior to his drafting, it’s discussed that the survival rate for the seven day tour of future duty is a staggering 20% and the minute Dan crashlands into the dystopian hellscape, it’s immediately obvious why – the enemy is nigh-on bulletproof and almost immediately despatch most of Dan’s fellow reluctant warriors.

The second act slows things down somewhat and we learn that there’s an actual reason why Dan has been conscripted; steering clear of spoilers, there’s a family connection and a possible way to save the future by using the past.

Sounds intriguing, right? And it is… on paper. As mentioned, for a time travel junkie such as myself, there’s a lot to love idea-wise in the script. There’s also loads of clever notions, such as there being a strict selection process for those called up to join the fight (that being those who get the call are dead by 2051, to avoid the creation of a time paradox).

There’s also quite a nice circle around family and the choices we make. Early on in the film we meet Dan’s estranged dad (played by the always watchable J.K. Simmons), a Vietnam vet who ran out on Dan during his childhood.

While in 2051, Dan learns some uncomfortable facts about his forthcoming fate and the film (all too) briefly examines whether future history runs the risk of repeating itself.

Truth be told, The Tomorrow War is never boring and always engaging, if somewhat predictable and unafraid to fall back on the occasional cliché; if you do decide to check it out, you won’t be wasting your time, but it never quite hits the heights of the potential the time trekking tale suggests. 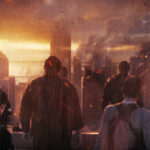 There are also numerous moments when you’ll feel a sense of déjà vu; the foes evoke an aforementioned Aliens vibe and you’ll also be able to play I-Spy with many moments which call back to the likes of World War Z, The Edge of Tomorrow, The Terminator, Starship Troopers and many more, not always in a good way.

Originally intended for the silver screen, the ongoing pandemic curtailed Paramount’s plans and Amazon won a subsequent bidding war to present The Tomorrow War to us sooner, albeit on the smaller screen.

Directed by Chris McKay, perhaps best known for The Lego Batman movie, you could be forgiven for expecting more moments of tongue-in-cheek shenanigans, especially with Pratt toplining (who is fine, but very much consistent with his other onscreen acting appearances).
Ultimately, what we have is an at-times entertaining outing that wears its influences on its sleeve but never quite matches the potential and promise the plot and high concept flirts with.