Following e recent price drop to £15.99, matching the instore price, Xtra-vision tell us they are now down to their last *50* copies available for pre-order. If you haven’t picked this up yet, now could be your last chance.

*Please note* that due to the tighter margin on this title after the price drop, our 10% discount code will no longer work on this.

Fans who pre-ordered at the original price will automatically get their order discounted. If you used the discount code on your pre-order, that will unfortunately be removed, but let’s face it, you’re STILL paying a hell of a lot less!

Chappie, the latest movie from Neill Blomkamp, is coming to UK steelbook in July.

Now you can order your copy online right now at Xtra-vision.

Dev Patel and Hugh Jackman star in this action thriller written and directed by Neill Blomkamp. When revolutionary scientist Deon (Patel) awakens his latest creation, a robot with artificial intelligence and the ability to think and feel like a human, his dreams and his nightmares all quickly become his reality. As the robot, Chappie (voice of Sharlto Copley), begins to develop in the same ways a human would, society around him finds it increasingly difficult to accept him into their lives. After Chappie is kidnapped by South African gangsters who wish to do him harm, Deon puts all his efforts into finding his creation and proving to the world that Chappie is not dangerous but merely provides evidence of the next generation of thinking. 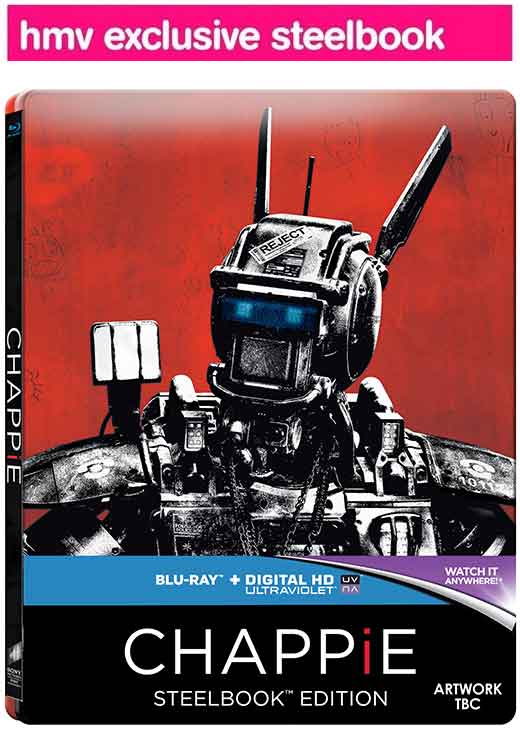