On August 22nd HMV are bringing us this new steelbook edition of the Sony’s last attempt at Spier-Man before heading to the MCU, and pre-orders are live right now.

This limited edition hmv exclusive steelbook includes embossing on Spider-Man and the film title and a debossed Spider symbol on the back, includes a 3D lenticular.

Andrew Garfield reprises his role as Peter Parker/Spider-Man in this superhero sequel based on the Marvel Comics characters. By day Peter Parker enjoys an ordinary life, spending time with his girlfriend Gwen (Emma Stone), but by night he flies high amidst New York skyscrapers as he battles evil. The emergence of Electro (Jamie Foxx), a figure with startling power and malevolent intentions, poses Spider-Man his greatest challenge to date, while he also has The Rhino (Paul Giamatti) to keep under control. The unexpected return of his old friend Harry Osborn (Dane DeHaan) is more welcome. Together, the pair come to realise that shadowy corporation Oscorp seems to be responsible for much of the evil they encounter. Can they find a way to put an end to Oscorp’s nefarious activities? 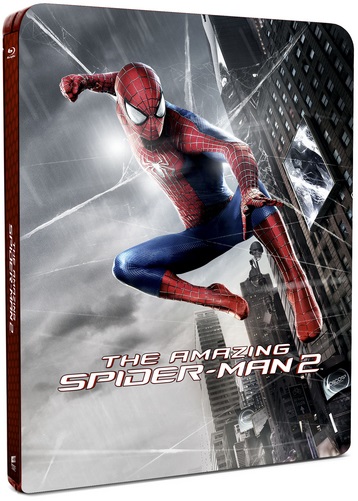