On January 16th Eureka/Masters of Cinema are bringing us a feature-packed new steelbook release of Das Cabinet Des Dr Caligari (The Cabinet Of Dr Caligari), which includes a newly restored version of the film, along with a with a bonus Blu-ray disc containing the 2014 documentary From Caligari to Hitler.

This isn’t an exclusive, so we’ll add more links as soon as we get them.

One of the most iconic masterpieces in cinema history, Robert Wiene’s Das Cabinet des Dr. Caligari shook filmgoers worldwide and changed the direction of the art form. Now presented in a definitive restoration, the film’s chilling, radically expressionist vision is set to grip viewers again.

At a local carnival in a small German town, hypnotist Dr. Caligari presents the somnambulist Cesare, who can purportedly predict the future of curious fairgoers. But at night, the doctor wakes Cesare from his sleep to enact his evil bidding…

Incalculably influential, the film’s nightmarishly jagged sets, sinister atmospheric and psychological emphasis left an immediate impact in its wake (horror, film noir, and gothic cinema would all be shaped directly by it). But this diabolical tale nevertheless stands alone – now more mesmerising than ever in this Blu-ray steelbook edition, along with a bonus Blu-ray disc containing the 2014 documentary From Caligari to Hitler, exploring the social and cultural impact of German Cinema during the Weimar Republic 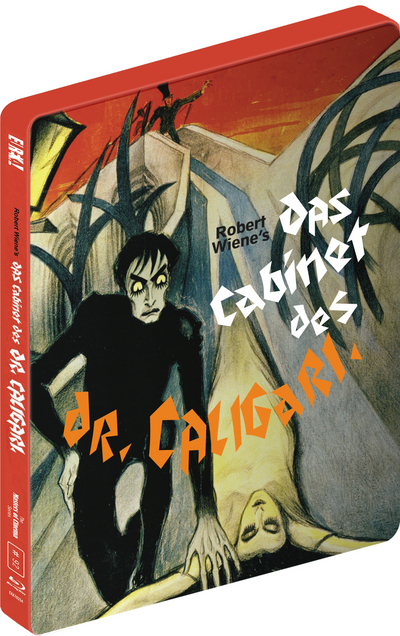