After being announced a couple of months ago in the US, a UK release for the Middle Earth saga Collectors Edition has been confirmed. Looking at the specs this seems to have everything from the US, with a comparably high price tag.

While it’s nice to get a set this puts together all the previously available extra features from the myriad of releases the various films have had over the years, it’s such a shame that the many, many hours of un-used behind the scenes footage and additional deleted scenes aren’t included. Buy all accounts Peter Jackson did offer/request to provide extra materials for this release, but Warner Bros turned him down. I’m sure they’ll find a way to release it in the future.

Anyway, there’s no denying this is a VERY handsome looking release, and it would look great in any collection, but if you already have the previous releases, you’re paying an awful lot for a few bits of merch, as beautiful as they no doubt will be.

Zavi’s pre-orders are live right now, but this isn’t listed as an exclusive release, so we’ll add more links when we get them.

THE HOBBIT: AN UNEXPECTED JOURNEY – Follow Bilbo Baggins, who – along with the Wizard Gandalf and 13 Dwarves, led by Thorin Oakenshield – is swept into an epic and treacherous quest to reclaim the lost Dwarf Kingdom of Erebor.

THE HOBBIT: THE DESOLATION OF SMAUG – Our heroes escape the giant Spiders and Wood-elves of Mirkwood before encountering the mysterious Bard, who smuggles them into Lake-town. Finally reaching the Lonely Mountain, they confront the Dragon Smaug. THE HOBBIT: THE BATTLE OF THE FIVE ARMIES – The Dwarves of Erebor have reclaimed their homeland, but face the consequences of unleashing Smaug. As five great armies go to war, Bilbo fights for his life, and the races of Dwarves, Elves and Men must unite or be destroyed. 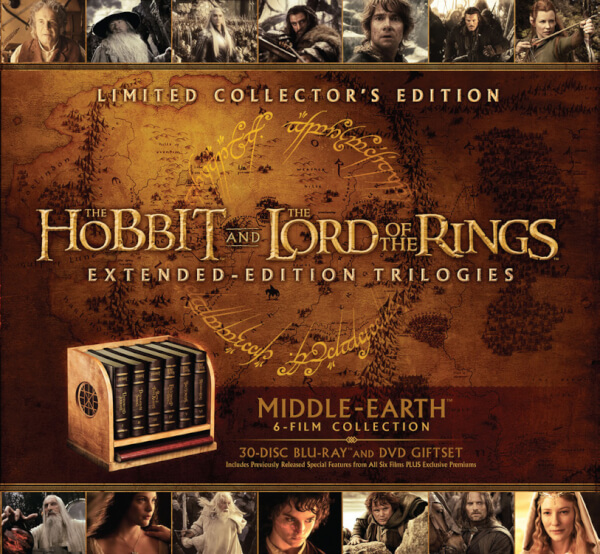