The second attempt to launch a big screen franchise based on the hit video game series Hitman is rolling out around the world, and right now you can place your order for the very nice looking UK steelbook release.

Rupert Friend stars in the eponymous role of this action thriller directed by Aleksander Bach. The International Contracts Agency (ICA), a top secret organisation that works independently of the U.S. government, has spent millions of dollars developing its own army of genetically engineered assassins. Known only by the last two digits of the barcode stamped on the back of his neck, Agent 47 is the best assassin in the business, boasting unrivalled intelligence, speed and strength. When 47’s latest target, multi-national corporation owner John Smith (Zachary Quinto), gets wind of his impending fate, Smith tries to penetrate the ICA to find the secret to their success in creating invincible agents with a plan of improving on their skills to develop his own army. 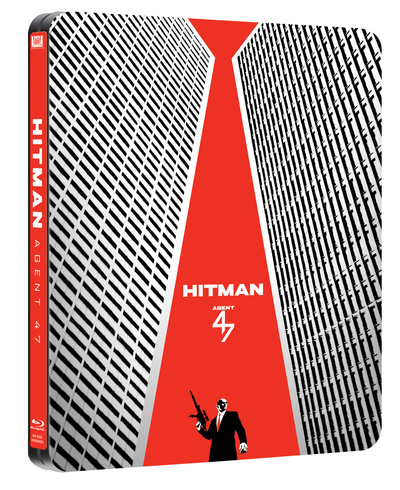